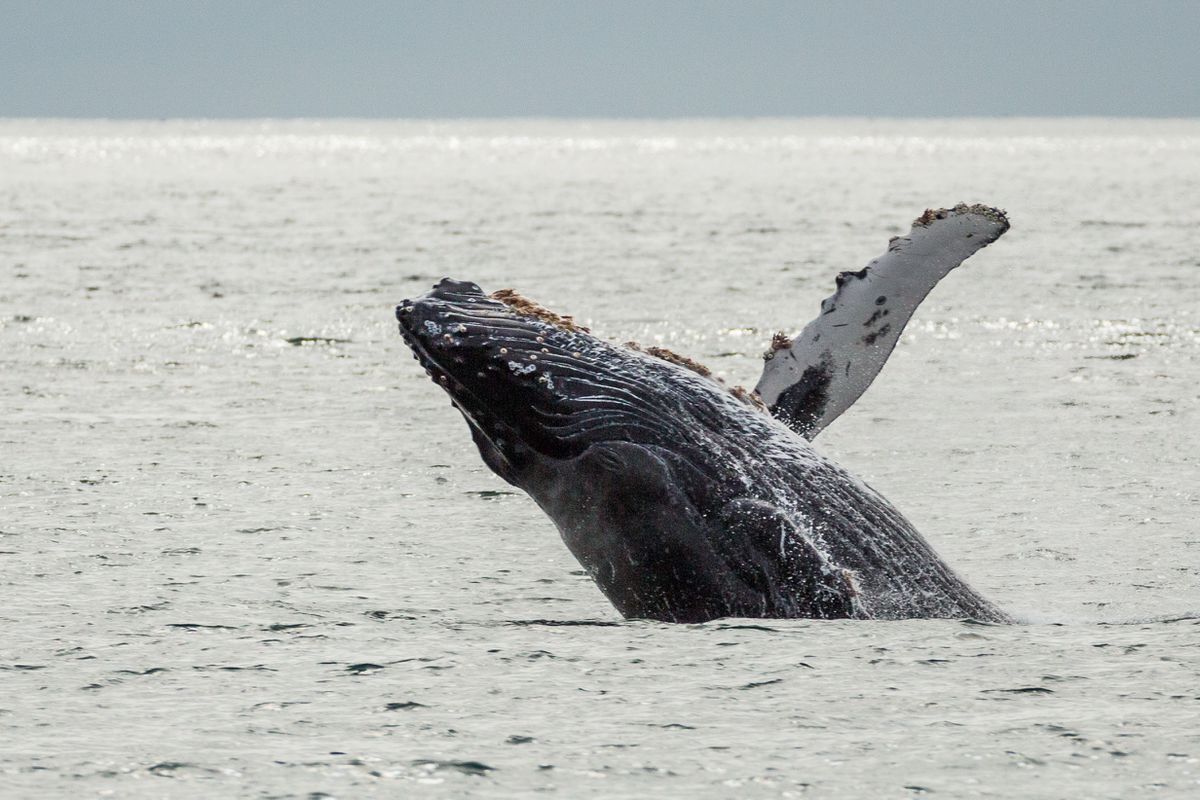 Humpback whales, a species that migrates to Alaska and is famous for singing below the water's surface and leaping above it, are now so numerous that most no longer need the Endangered Species Act protections that have sheltered them since the 1970s, federal officials said on Tuesday.

The National Oceanic and Atmospheric Administration issued a final rule designating 14 distinct population segments of humpback whales and removing listing for nine of those segments. The ruling will go into effect in early October.

In most of the areas where they swim, humpback whales have recovered since their main threat — commercial whaling — was removed, NOAA officials said.

"For most of those newly designated population segments, numbers have risen in the decades since commercial whaling was outlawed," Angela Somma, chief of the endangered species division at NOAA's National Marine Fisheries Service, said in a teleconference.

Among the whales considered to be thriving is the population segment of more than 11,000 humpbacks which spend winters in the waters off Hawaii, and their summers feeding in waters off Alaska.

Two other distinct populations that summer in Alaska waters, however, will keep endangered protections.

The Mexico population, which migrates up the U.S. West Coast and has a population of about 3,200, will be classified as threatened under the new rule.

The Western North Pacific population segment, which summers in the Bering Sea and Aleutian Islands region, will continue to be listed as endangered under the new rule. That population group winters in waters off the Japanese island of Okinawa, the Philippines and other Asian areas.

That population totals 1,059 and "has quite a few threats out there," including entanglements in fishing gear, ship strikes, oil and gas operations and illegal or unreported whaling, Marta Nammack, the fisheries service's endangered listing coordinator, said in the teleconference with reporters.

For regulators, the main impact of delisting will be the elimination of a multiagency endangered epecies review prior to issuance of any federal permit.

Commercial fishing managers will have to sort out protections in waters off Alaska, where humpback whales from delisted, threatened and endangered population segments might mingle during the summer. That might require managers to take a new "proportional approach" that considers known abundance levels and geographic locations, Somma said.

The delisted humpbacks, like all whales, will continue to be safeguarded under the Marine Mammal Protection Act, she said. In Alaska and Hawaii, for example, mandatory buffer zones keeping ships a safe distance from humpback whales will continue, albeit under the auspices of the Marine Mammal Protection Act rather than the Endangered Species Act, she said.

The delisted populations will also be monitored over the next decade, she said.

NOAA's decision follows separate petitions filed in 2014 by the state of Alaska and another filed in 2013 by the Hawai'i Fishermen's Alliance for Conservation and Tradition. Even before those petitions were submitted, NOAA officials said, a review had been launched to consider the status of all the world's humpback whales.

Humpback whales dwell in ocean waters from the Bering Sea to the Southern Hemisphere. The entire world population was listed as endangered shortly after the Endangered Species Act was signed into law in 1973.

"Some humpbacks are on the road to recovery, thanks to the tremendous power of the Endangered Species Act, but the job isn't finished. These whales face several significant and growing threats, including entanglement in fishing gear, so ending protections now is a step in the wrong direction," Kristen Monsell, an attorney with the Center for Biological Diversity, said in a statement.

She cited what she said was a big increase in fishing gear entanglements off the West Coast, with nearly 40 cases reported for the first half of the year, and said more should be done to prevent such problems.

"The fact that we can see humpback whales breaching and feeding in the ocean after they were nearly wiped out shows the power of the Endangered Species Act. Those protections should stay in place for these amazing animals," Monsell said.

The Center for Biological Diversity in the past has cited other environmental threats, including climate change and ocean acidification, as reasons to keep endangered protections in place for humpbacks.

Somma, in the teleconference, said climate change was considered when agency experts reviewed humpbacks' status. In the end, for those nine delisted population segments, climate change is not considered a significant threat, she said.

"There certainly are issues to be concerned about, but we found no basis to conclude that potential impacts from climate change contribute significantly to the extinction risk for these populations now or even in the foreseeable future," she said.

Other distinct population segments that will retain endangered listings are in the Cape Verde area off Africa, the waters off Central America, a group that migrates in summer to U.S. West Coast waters, and the world's smallest humpback population segment: the whales in the Arabian Sea. That population numbers only 88, according to NOAA estimates, and faces dangers from oil activities, disease and other problems, including climate change, Nammack said.

That population "has nowhere to go," she said. "It's landlocked so it cannot swim further north, and so therefore we thought climate change also added to its risk of extinction."