What has happened to our Chugach Dall sheep? 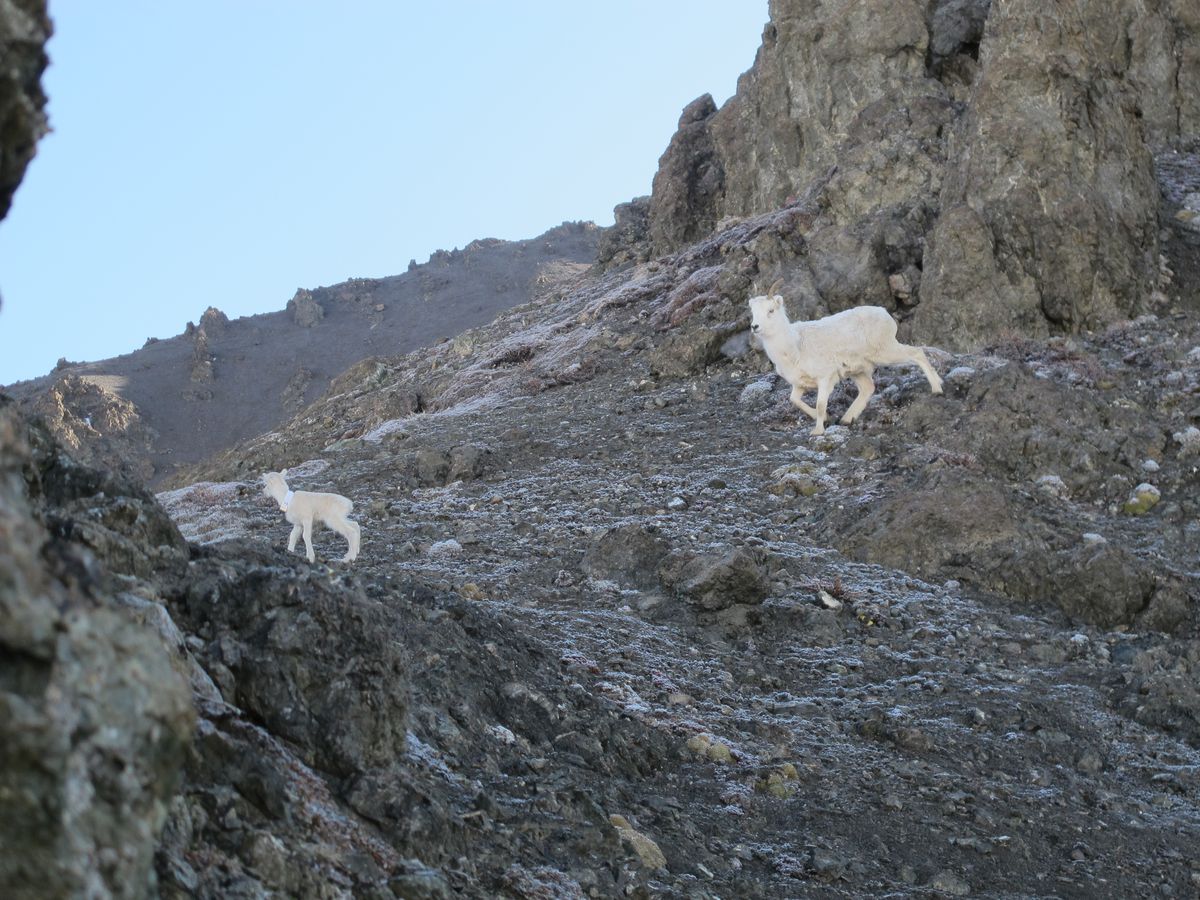 A ewe rejoins her radio-collared lamb near Nelchina Glacier in 2013. (Tom Lohuis / ADFG)

A ewe rejoins her radio-collared lamb near Nelchina Glacier in 2013. (Tom Lohuis / ADFG)

For Dall sheep in the Chugach Mountains, winter used to be a real cliffhanger, the toughest of the four seasons to survive. Nowadays, surviving summer may be the more challenging life skill.

Don't get me wrong. Winters can still be tough. Deep snow and icy crusts limit access to food, and the occasional freakishly warm chinook winds and heavy snows of the mountains leave icy footholds and avalanche hazards. More Dall sheep are killed by avalanches than predators in the western Chugach Mountains.

But warmer summers are presenting a new hurdle. The mean growing season temperatures in the western Chugach Mountains have climbed nearly one-half degree Fahrenheit since 1972. Spurred by warmer growing seasons, such shrubby vegetation as alders and willows have crept uphill, replacing alpine tundra the sheep feed on.

Dall sheep populations have declined in other mountain ranges, but there is no recent research that assesses the relative impacts of higher temperatures on nutrition compared with other limiting factors such as predation.

Dall sheep are grazers that have evolved to exploit the alpine meadows between the shrub line and barren rocks at high elevations. Alpine plants like dryas are critical foods. Warmer summers may also be reducing the quality of forage, particularly for ewes, who tend to be restricted to steep terrain during lambing and early lamb-rearing.

Is climate change reducing the quantity and quality of Alaska's Dall sheep habitat? This is a hypothesis being tested by Tom Lohuis, a wildlife research biologist with the Alaska Department of Fish and Game, and Roman Dial, a professor at Alaska Pacific University.

Dall sheep in the Chugach

Lohuis began studying Dall sheep in 2009. He's wrapped up his initial research project, and results are available on Fish and Game's website.

Because he suspected the critical period was winter, Lohuis designed the study to test that assumption. In defiance of conventional wisdom, he found that Chugach sheep populations weren't limited by predation. He also ruled out disease and other direct causes of mortality, like hunting or avalanches, as factors limiting population growth.

Hunters are restricted to full-curl sheep, and only 10-20 a year are harvested these days.

If direct mortality isn't putting a lid on population growth, then maybe the problem lies at the other end of a sheep's life cycle: not enough incoming sheep. During the study, Lohuis found some of the lowest reproductive rates of any wild sheep in North America. Lamb survival was also low and variable, although lambs in the Chugach Mountains were much less likely to be killed by a predator than lambs in the Alaska Range.

There's another important piece of the puzzle. According to Lohuis, who's also studied and handled mountain sheep in the Talkeetna and Wrangell mountains, as well as in the Lower 48, ewes in the Chugach Mountains were "skinnier than anything we've ever seen."

Lohuis rated each sheep's body condition on a five-point scale where zero was dead and five was as fat as a butterball. Most of the ewes in the Chugach Mountains ranged from 1-2 in late winter. They had no subcutaneous fat, which meant all the bony protuberances along the spine, shoulders and pelvis were jutting out like an anorexic model. In contrast, ewes captured in late winter in the Alaska and Brooks ranges were well-muscled and retained some subcutaneous fat.

Even in winters with moderate snow and ice conditions, many Chugach ewes struggled to produce viable lambs. Lohuis now believes a deficiency of summer forage is keeping the sheep population from rebounding to earlier levels of abundance.

Lohuis was pondering how to assess the quantity and quality of summer forage when he gave a presentation on his study at an Alaska chapter of The Wildlife Society conference in 2015. Roman Dial was in the audience. Dial had published several scientific articles that documented historic reductions in alpine tundra in the Chugach and Kenai mountains as a result of the warming climate. Dial concluded that the loss of habitat would almost certainly affect Dall sheep.

"Protein is critical to a successful pregnancy," Lohuis explained, "so I was wondering if the low pregnancy rates I observed could have been the result of poor summer nutrition or extremely harsh winter conditions."

When the two scientists introduced themselves it must have been like discovering a doppelganger, your mirror image.

"As I remember it," Lohuis said, "Roman asked if tree-line advance and the conversion of alpine tundra to brush might have something to do with the nutritional limitation."

In a 2016 article in the journal Global Change Biology, Dial reported that the lower edge of alpine tundra in the Chugach and Kenai mountains had shifted upward about 150 to 275 feet in elevation, respectively, in less than 50 years. He found the retreating tundra correlated with rising growing-season temperatures.

An average increase of one-half degree Fahrenheit doesn't seem like much; however, the higher temperatures also increase the length of the growing season.

Pinched between the advancing shrubs and either barren rocks or mountaintops, alpine tundra has nowhere to go. It's like carving off an inch around the rim of a pie. Relatively small adjustments in the shrub line can result in substantial losses of alpine habitat.

Comparing notes, the two biologists with complementary scientific objectives and data sets immediately decided to collaborate. To better understand the historic reduction in Dall sheep habitat based on aerial photos, they are supervising Tom Day, a Master of Science candidate at APU. Another APU graduate student, Kyle Smith, will determine habitat use and movements of 30 Dall sheep equipped with GPS collars. And to gain fine-scale information, Luke Metherell, an undergraduate student at the University of Alaska Anchorage, will spend a lot of time in the mountains observing sheep foraging to determine exactly which plants they're eating, gathering samples to measure nutritional content.

When wildlife managers find populations limited by predation, they can do something about it — kill the predators. But when the culprits turn out to be poor habitat and the weather, that's a problem. Like Charles Dudley Warner said, everybody talks about the weather, but nobody does anything about it.

Or, as Lohuis admitted, "We can't easily fix climate change."

If the shrub line continues to advance uphill and sheep forage has a lower protein content due to warmer summers, it may be a while before the sheep population rebounds to previous highs. We may be looking at a new normal.

Or sheep populations might continue to decline as growing season temperatures continue to climb and the shrubs crawl up the slopes like a slow-motion avalanche in reverse.

Rick Sinnott is a former Alaska Department of Fish and Game wildlife biologist. Contact him at rickjsinnott@gmail.com.