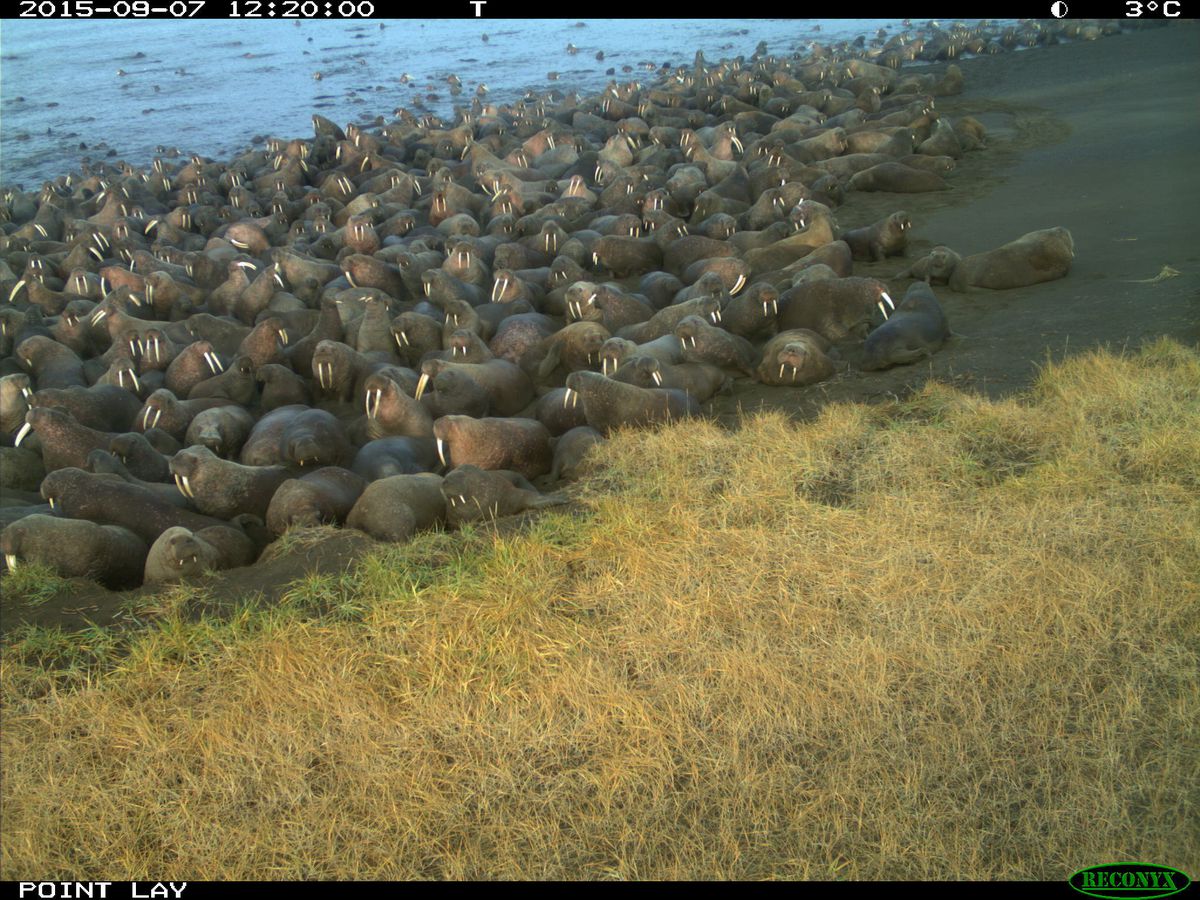 Pacific walruses rest on the shore of a barrier island near the village of Point Lay on Sept. 7, 2015. (Alaska Region U.S. Fish and Wildlife Service)

Pacific walruses rest on the shore of a barrier island near the village of Point Lay on Sept. 7, 2015. (Alaska Region U.S. Fish and Wildlife Service)

Several hundred Pacific walruses have started to gather on an island off the northwest coast of Alaska — the earliest the animals have been observed leaving the water for the annual ritual, according to federal wildlife officials.

The walruses started appearing on a barrier island near the village of Point Lay during the first week of August.

"This is the earliest date yet for the haulout to form," the Alaska Division of the U.S. Fish and Wildlife Service said in a release.

Previously, the earliest haulout date on record was Aug. 17, back in 2011, said Fish and Wildlife Service spokeswoman Andrea Medeiros.

The gathering of the enormous animals near Alaska's Chukchi Sea coastline is the result of retreating sea ice in recent years.

Walruses typically use floating ice as platforms to rest between dives to forage for food, but summer and fall melt has forced them ashore. The animals haul out about two weeks after the continental sea ice recedes.

"This year, sea ice has retreated beyond the continental shelf earlier than in previous years," Medeiros said.

"It will be important to monitor August 2017, as weather conditions and storm events during this month have been closely related to the seasonal minimum sea ice extent in the recent years," the data center said in an Aug. 3 report.

A herd of 6,000 Pacific walruses hauled out on the same barrier island last year, but at a much later-than-average date of Oct. 7.

But after a weekend there, the herd appeared to have moved on, with officials reporting that the animals were likely headed south to coastal haulouts in Chukotka, Russia.

The big Point Lay gatherings have happened almost every fall since 2007, a year notable for sea ice retreat.

As with most recent years, the villagers of Point Lay are expressing concern about the potential disturbance to the animals.

The Fish and Wildlife Service relayed statements from Leo Ferreira III, the tribal council president of the Native Village of Point Lay, addressing the need to protect the walruses from disturbances by aircraft and boats.

The village does not have the infrastructure to support tourists, Ferreira said.

"Could you please respect the Point Lay residents and not come to Point Lay and ask to go take an excursion ride, which is about (2 to 5) miles away from this community to go take pictures of the walruses," Ferreira said. "Because we feel like even the pictures will disturb the walruses when they're congregated on the beach."