‘Something needs to be done’: Anchorage Assembly looks at tightening city laws around trash to reduce bear problems 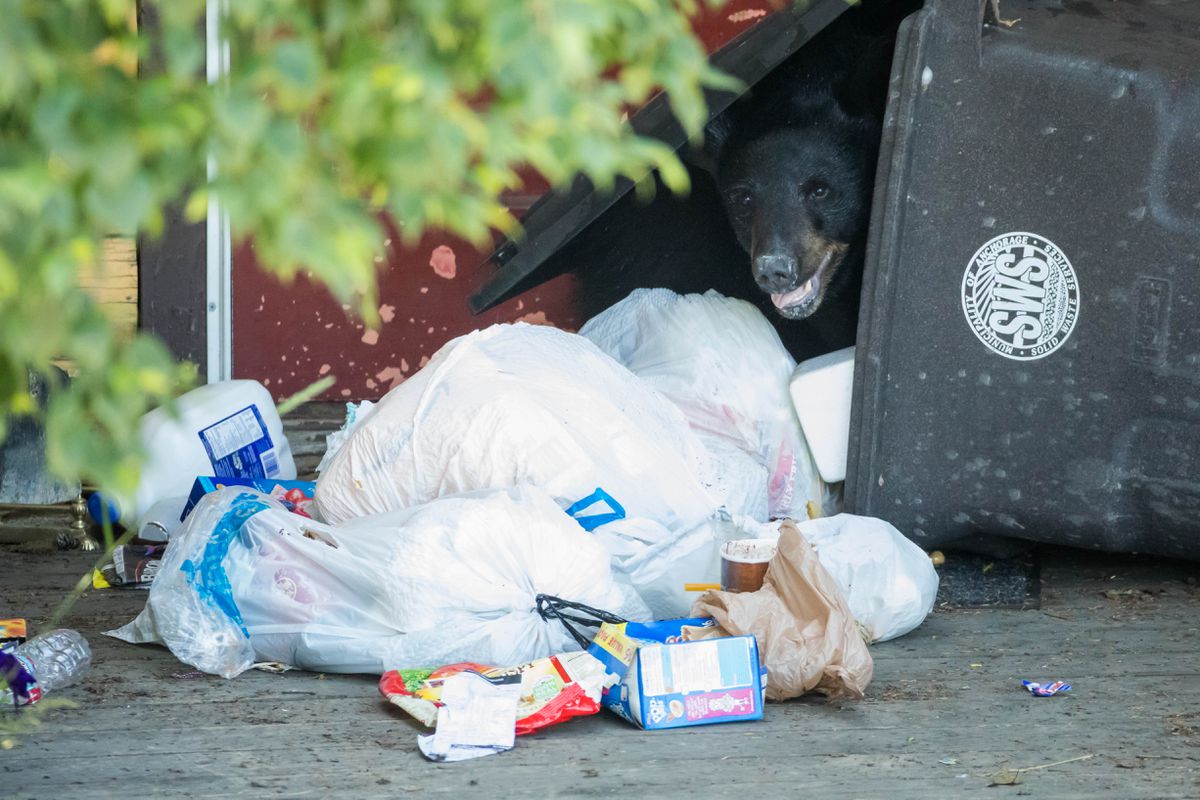 A young black bear peers out from within a trash can in Fairview Wednesday, July 12, 2017. (Loren Holmes / ADN)

A young black bear peers out from within a trash can in Fairview Wednesday, July 12, 2017. (Loren Holmes / ADN)

Trash that's not properly secured is attracting bears to Anchorage neighborhoods, and it's getting out of hand, say wildlife officials.

"Something needs to be done," said Dave Battle, the Anchorage-area wildlife biologist for the Alaska Department of Fish and Game. "There are certain areas, like north Muldoon, where bears are coming in all the time because people are just leaving their trash right outside their house."

This isn't a new issue in Alaska's largest city, and Fish and Game has long reiterated that Anchorage needs to do a better job taking care of trash. Now, the Anchorage Assembly is stepping in.

At a work session Friday, some Assembly members said it appears bear encounters are on the rise in Anchorage. The Assembly discussed how it could tighten city laws around trash to reduce bear problems, including adopting a new set of fines or shifting when Alaskans can take out their trash cans for pickup.

"The broad goal is just to reduce the number of bear-human interactions in Anchorage," said Assembly chair Forrest Dunbar. "I'm opened to any ideas that are proven to work."

No decisions were made on Friday. But Dunbar said the meeting attended by Battle, city officials and Anchorage waste haulers, would inform changes to city law that he hoped to have in place by next summer. The Assembly would have to vote on and approve those changes

[Watch: In this matchup between a bear and a trash can, the can won]

Jack Frost, the city's chief code enforcement officer, presented some ideas to the Assembly in a handout Friday. He said he'd like the Assembly to streamline and simplify parts of city law that deal with how trash is handled. Currently, he said, three different sections of the law address the topic, but in slightly different ways, making it difficult to enforce.

For years, he said, code enforcement officers have focused on educating people who have overflowing dumpsters or loose trash, but some residents are repeat offenders. That's a neighborhood safety issue, he said. The law must be more enforceable.

"We're trying to put the impetus on the property owner," Frost said. "This is your property. We're not your property managers. Please take care of your trash."

Here's some of the ideas in the Assembly handout that Frost and other city officials created:

• Have one set of standards applied across the municipality.

• Limit the hours residents can put out their trash bins for pickup from 5 a.m. to 10 p.m.

• As is in current city law, require that all garbage cans and dumpsters be rodent proof, insect proof and watertight with tight-fitting lids. They also must be stored in a way to prevent spillage and littering.

"Our intent on this is that we would be proactive," Frost said. "It's not going to be very long doing that before the word gets around and people will understand that they need to take more responsibility for their trash."

So far this summer, city code enforcement officers have issued one citation to an Anchorage resident who didn't put garbage in a sealable container, Frost said. Anchorage police have issued three citations for trash that wasn't secured properly, said a spokeswoman with the Anchorage Police Department.

There's also a state law that deals with trash and wildlife, but Battle said it has proven difficult to enforce as well. State law imposes a $300 ticket for intentionally or negligently feeding bears, which includes leaving out trash so bears can get it. However to issue a citation, Battle said, an officer must have evidence that unsecured trash had attracted a bear, such as a photograph of the animal in the garbage.

That's not the only problem, he said. The state law is reactive, which doesn't help keep bears out of neighborhoods, Battle said. Once a bear has gotten into the trash, it's gotten its reward and will likely return.

Battle said Anchorage needs a proactive, enforceable law that would help address sloppy trash storage before a bear shows up. If the city doesn't clean up, the bears will not go away. Battle said he believes the best way to keep the bears out of Anchorage neighborhoods is both having a city law that requires residents secure their trash and having more bear-resistant trash cans.

"Literally we could cut the (number of) bears in half, I think, and if we have the same amount of available trash, we're still going to have problems," Battle said.

There's no official count of how many bears live within the municipality, which includes the wilderness of Chugach State Park, so it's impossible to say if the number is on the rise, Battle told the Assembly Friday. Battle said it seems the number of human-bear conflicts has increased, but it's unknown if that's due to more bears, more people, more trash or a combination. It's also possible, he said, that social media has led to the perception that there have been more bear encounters in the city.

"Whether it's a problem of having more bears or just a perception, it's still a problem we have to deal with," he said.

In two summers, there have been two fatal bear maulings in the Anchorage area.

According to Fish and Game data, the number of bears killed in the Anchorage area outside of hunts this year is among the highest totals ever recorded in the municipality. There have been 37 bears killed — 30 by authorities including Fish and Game and the Anchorage Police Department, and the rest by citizens under defense of life and property laws.

Assembly members discussed Friday whether more people should have bear-resistant trash cans in Anchorage and if there's any way to make those cans more affordable.

The cans are expensive to purchase, representatives with Anchorage waste services told the Assembly. Depending on the utility, having a bear-resistant trash can increases a resident's monthly bill by about $2 to $4.

Rick Sinnott, a former area wildlife biologist for Fish and Game in Anchorage, said unless the city wants to upend its garbage collection system, he believes there's just one solution to reducing human-bear conflicts in the municipality: Requiring residents who live in areas with high bear activity have bear-resistant trash cans.

"That's really most of Anchorage anymore," he said.

No conclusions were reached at Friday's Assembly meeting. Dunbar said he expected the discussions to continue.