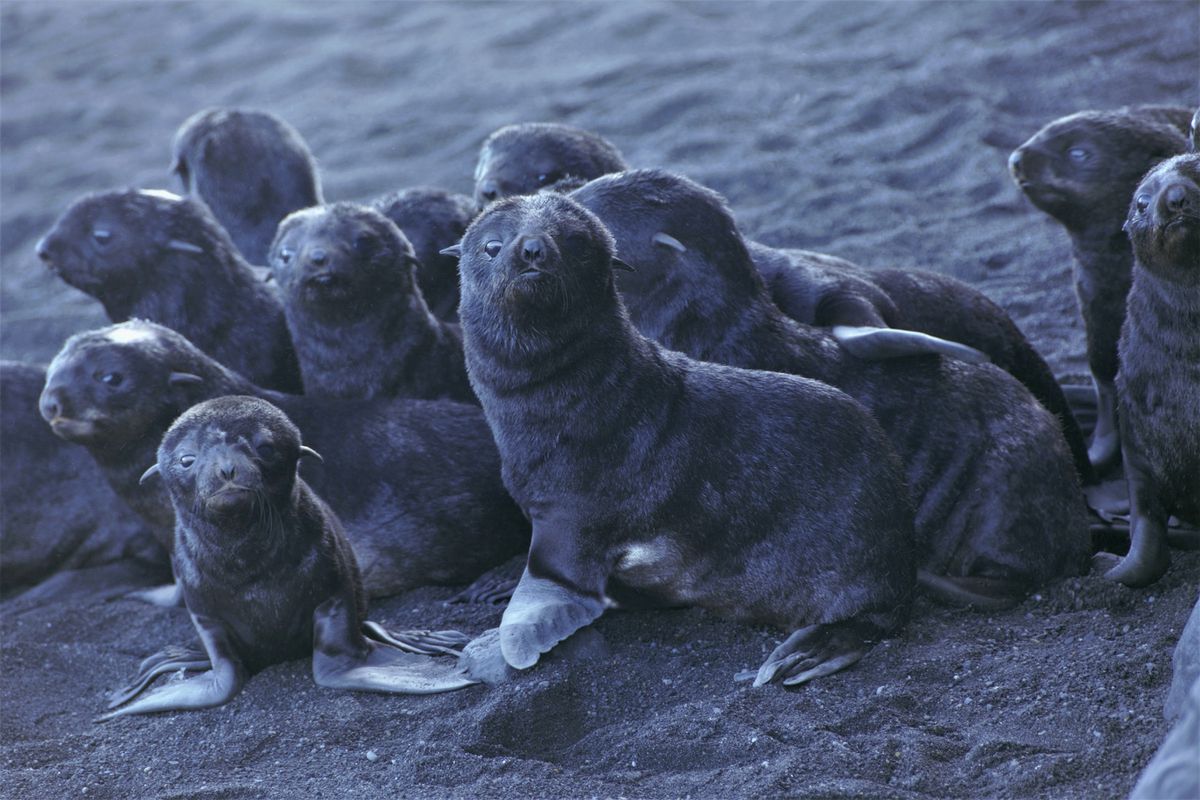 This August 2019 photo released by the National Oceanic and Atmospheric Administration Fisheries (NOAA) shows northern fur seal pups standing on a beach on Bogoslof Island, Alaska. Alaska's northern fur seals are thriving on an island that's the tip of an active undersea volcano. Numbers of fur seals continue to grow on tiny Bogoslof Island despite hot mud, steam and sulfurous gases spitting from vents on the volcano. (Maggie Mooney-Seus/NOAA Fisheries via AP)

This August 2019 photo released by the National Oceanic and Atmospheric Administration Fisheries (NOAA) shows northern fur seal pups standing on a beach on Bogoslof Island, Alaska. Alaska's northern fur seals are thriving on an island that's the tip of an active undersea volcano. Numbers of fur seals continue to grow on tiny Bogoslof Island despite hot mud, steam and sulfurous gases spitting from vents on the volcano. (Maggie Mooney-Seus/NOAA Fisheries via AP)

Alaska’s northern fur seal population for three decades has been classified as depleted, but the marine mammals are showing up in growing numbers at an unlikely location: a tiny island that forms the tip of an active undersea volcano.

“The population growth of northern fur seals on Bogoslof has been extraordinary,” said Tom Gelatt, who leads a NOAA Fisheries group that studies northern fur seals. Federal scientists visited the island in August.

Geographically speaking, the island is not a particularly unusual place for the seals known for their thick coats to hang out. Most of the world’s roughly 1.1 million northern fur seals breed in the eastern Bering Sea. The animals live in the ocean from November to June and head for land in summer to breed and nurse pups.

But why the seals chose volatile Bogoslof over the dozens of other uninhabited Aleutian Islands is unclear.

“The surface is covered with these big, ballistic blocks, some as big as 33 feet in length that were exploded out of the vent,” said Chris Waythomas, a U.S. Geological Survey research geophysicist at the Alaska Volcano Observatory. “They litter the surface. It’s pretty wild.”

The animals were first spotted on Bogoslof in 1980, and NOAA researchers have since conducted periodic checks on the population.

A California stock of northern fur seals in the San Miguel, Channel and Farallon Islands is estimated at about 14,000 animals, while an unknown number live in Russian waters.

The seals stay on beaches, but on Bogoslof _ which is about a third the size of New York City’s Central Park _ they are never far from signs of volcanic activity.

The center of the island supports a field of fumaroles, openings through which hot gases emerge. Some roar “like jet engines” and spurt mud geysers several meters high, Waythomas said. He has visited the last two summers.

“It was amazing, the sounds that were being produced,” he said.

Eruptions in 2016 and 2017 showered the landscape with rocks and killed all vegetation. They also shrank and grew the island. Explosions destroyed acres of Bogoslof only to have fragmented material blown from lava vents create new real estate. The island remains about half a square mile.

Food in the nearby deep water could be a factor in the seals’ behavior. Bogoslof’s seals eat squid and northern smoothtongue, a deep-water fish that looks like a smelt. Seals on St. Paul, the largest of the Pribilof Islands, forage on the shallow continental shelf for walleye pollock, a fish targeted by commercial fishermen.

Females with pups on Bogoslof return from foraging faster than Pribilof mothers, possibly allowing their pups to receive more meals and wean at a larger size, Gelatt said. Bogoslof also is closer to winter feeding grounds south of the Aleutians, possibly allowing pups to reach the grounds with less risk from Bering Sea storms.

Northern fur seals are distinct from harbor, ringed, bearded, ribbon and spotted seals in Alaska, which have no ear flaps. Northern fur seals, like sea lions, are eared seals. They were named for their concentrated fur: Fur seals have 350,000 hairs per square inch.

The animals have a prominent role in the history of colonized Alaska. After hunting sea otters to near-extinction, Russian traders turned to northern fur seals and relocated Aleuts to the Pribilofs to kill and process seals. When Emperor Alexander II needed cash and decided to sell Alaska to the United States in 1867, fur was one of the future state’s known assets.

But by 1988, four years after the commercial harvest ended on St. Paul, the northern fur seal population had declined by more than half from its 1950s estimated population of 2.1 million animals.

NOAA biologists don’t know why northern fur seals have not made a comeback.

Volcanic activity on Bogoslof has been relatively stable, but Gelatt’s crew chose not to camp there during their weeklong August expedition, fearing a recurrence of explosions that could shoot boulders like bottle rockets. They instead made day trips from an anchored boat.

The crew tallied seals and assessed whether aerial images taken from unmanned aircraft could be used in future counts. As fewer seals breed on St. Paul Island, the growth on Bogoslof is significant.

“Barring other future catastrophic eruptions that could dramatically change the geography of the island, there is plenty of room for a lot more seals on Bogoslof,” Gelatt said.