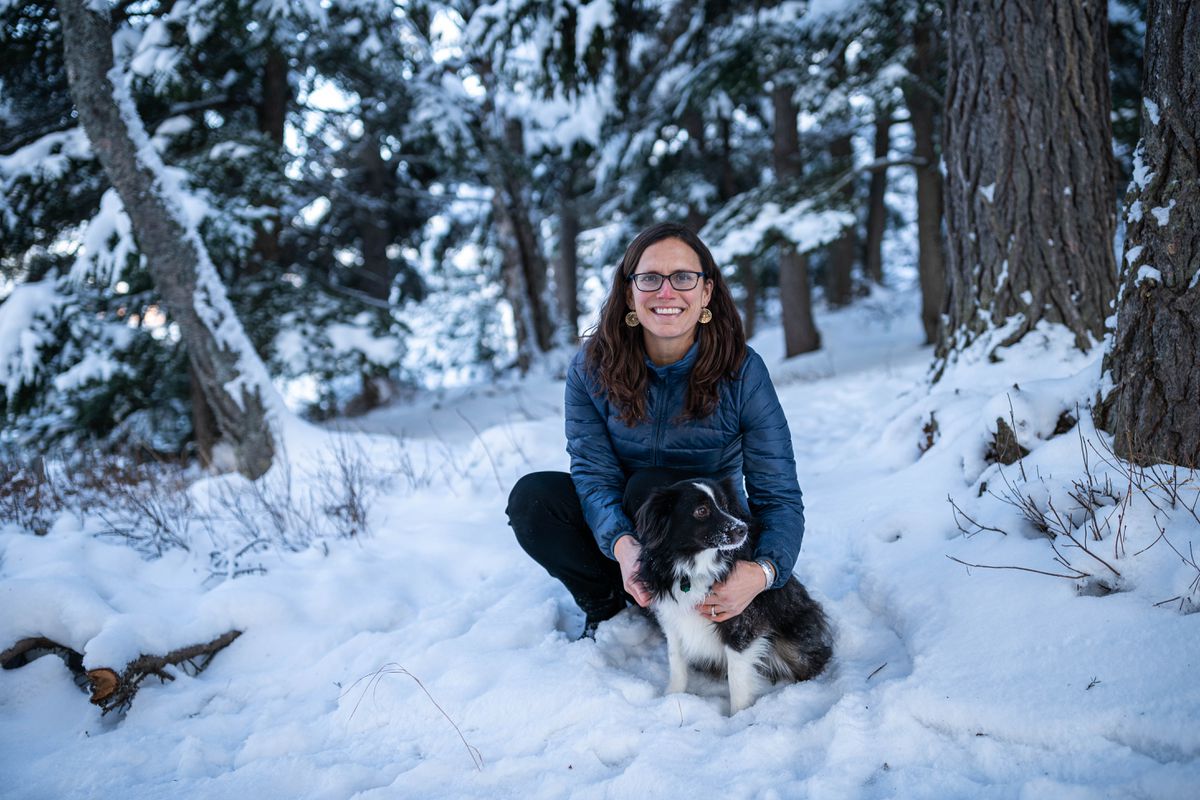 Annette Rearden and her dog Hawkeye, photographed on the Anchorage Hillside on Friday. Rearden and Hawkeye encountered a lynx while walking near Service High recently. (Loren Holmes / ADN)

Annette Rearden and her dog Hawkeye, photographed on the Anchorage Hillside on Friday. Rearden and Hawkeye encountered a lynx while walking near Service High recently. (Loren Holmes / ADN)

Annette Rearden was walking with her young daughter and their dog on the Anchorage Hillside last Tuesday afternoon when, out of the corner of her eye, she saw a flash of gray.

In a burst of movement, a lynx emerged from the trees and tried to swipe at their mini Australian shepherd, Hawkeye. The lynx did a sort of dance, the way a cat does, taunting its prey, Rearden said.

Then it “sauntered across the trail” in front of them.

Rearden was puzzled before she quickly realized what had happened. She yelled, maybe with some expletives. Her 4-year-old daughter tried to chase after the lynx but Rearden grabbed her.

The lynx remained nearby, just off the trail, staring.

Other Anchorage dog owners have reported similarly unsettling encounters with lynx in recent days. A man at Prospect Heights on the Hillside reported a lynx approaching his small dog in his driveway Wednesday, according to Dave Battle, Anchorage area biologist for the Alaska Department of Fish and Game. And the department received a report earlier this winter asserting a lynx was the culprit behind a small dog’s death in Eagle River, although that has not been confirmed by state wildlife officials.

Lynx numbers are high in Anchorage right now, following a population boom of snowshoe hares in Southcentral Alaska, according to Battle. The two populations are linked because the hares are the lynx’s main prey. The snowshoe hare population peaks and then crashes about every 10 years, and the lynx usually follow suit, Battle said.

With more lynx around, more people are likely to come into contact with them, Battle said. And eventually that can lead to reports of odd interactions with the long-legged and pointy-eared cats.

After Rearden’s encounter with the lynx in the area behind Service High School, a woman who had been skiing with her dog nearby called out to ask if she was all right. Rearden responded that she was OK and told her about the lynx.

And then Rearden looked to her left, where the lynx remained.

“It just stood there, right at the edge of the tree line,” Rearden said.

Suddenly, about 30 Junior Nordic skiers came by. Still, the lynx didn’t move. A group of people formed around it and watched.

“I was stunned," Rearden said. "I had seen lynx in nature and most of the time they just look at you and then kind of bolt.”

But this time, the lynx stayed still. As the kids moved on, a Junior Nordic parent volunteer and another adult came upon the lynx to peer into the trees.

The whole interaction took about five minutes, Rearden said. She decided to keep walking on the trail. When they came back to the same area, Hawkeye began to growl and bark, possibly from memory or scent or maybe the lynx was still around, Rearden said.

Just 30 minutes before the lynx swiped at Rearden’s dog, Sara Rufner, a writing professor at the University of Alaska Anchorage, was walking her dog Rio, a 55-pound silver Lab, in the same area.

It was there in the web of trails that Rio stopped short. Maybe there was a biker or something up ahead on the trail, Rufner said she thought.

Then Rufner looked ahead and saw the lynx in the trees. It was gray and white in coloring, camouflaged against the dim, snowy mid-January woods.

She took off her gloves and pulled out her phone in an attempt to snag a picture of the large, bobcat-like feline. The lynx took a few steps toward Rufner and Rio, which surprised and alarmed her.

Then, she realized, the lynx had locked its eyes on her dog.

Rufner began to tug on Rio, who freezes up when she gets scared.

“She’s terrified of everything," Rufner said. “I was trying to drag her, backing up to get away.”

Rio barked and it took Rufner a couple tugs to get the dog to turn around and start walking back.

After a minute, Rufner looked back and saw the lynx was following them.

Maybe it was only a few seconds — it’s hard to tell when you’re on alert, Rufner said — but when she looked back again the lynx was still there, about 20 or 30 feet back.

“At that point, I just broke into a run and ran until I got back to the neighborhood,” Rufner said.

When she got home, Rufner said she started to second-guess whether she should have run off.

Later that evening, however, she checked Facebook and saw that the wife of one of her colleagues at the University of Alaska Anchorage, Annette Rearden, had posted about a strikingly similar interaction with a lynx that same afternoon.

Both Rearden and Rufner said they reported the sightings to Fish and Game.

When reports of lynx interactions come in, Battle said, it’s hard to verify exactly what went on.

Recently, the agency has had some reports of people feeling like lynx were aggressive or highly interested in their dogs. But it’s rare for a lynx to make contact with a dog.

It’s possible that a lynx may get defensive when a dog or other animal comes up on the trail, he said.

“We do get a number of reports where people feel like the lynx wasn’t as scared of the person as they should have been," Battle said. "Lynx just act like that sometimes.”

[Photos: A quick visit from a pair of lynx]

He said sometimes the cats do just sit and stare. The lynx that live near urban areas don’t show fear every time they interact with a person because they’re used to people, Battle said.

Fish and Game hasn’t put out warnings about the lynx the way they would with other wild animals like moose, bears, wolves or coyotes. But Battle said, even with lynx, “you do have to be cautious anytime you’re around any wild animal."

When it comes to a lynx following someone, that’s unusual, Battle said. It’s hard to say what was going on. It might have just been curious, he said — they are cats, after all.

Just a lynx commuting along the Chester Creek Trail this morning like the rest of us. 😹 📷: @petra.davis

A post shared by Anchorage Parks and Recreation (@anchorageparksandrec) on Nov 15, 2019 at 12:23pm PST