Populations on the rise in Alaska villages threatened by erosion, changing climate 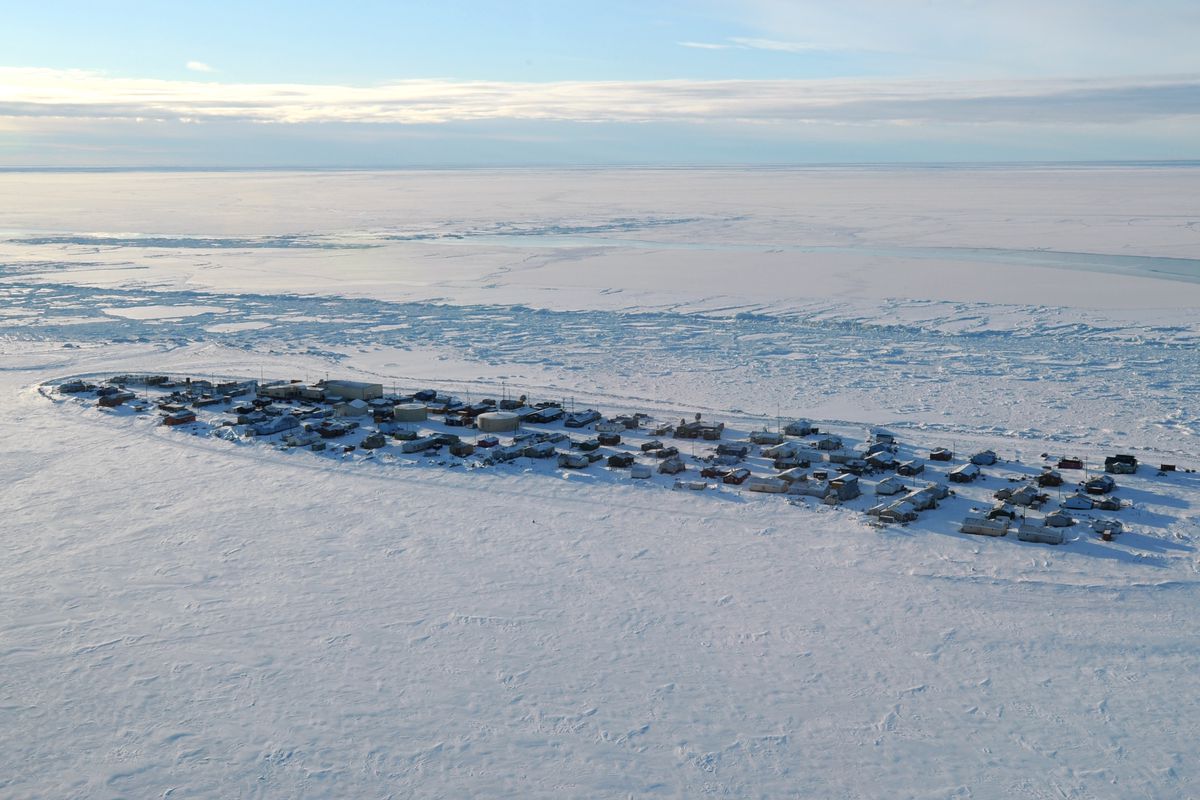 Aerial view of the village of Kivalina, which is threatened by coastal erosion of the long barrier island between the Chukchi Sea in the distance and a lagoon at the mouth of the Kivalina River in the foreground on Monday, Feb. 16, 2015.

Aerial view of the village of Kivalina, which is threatened by coastal erosion of the long barrier island between the Chukchi Sea in the distance and a lagoon at the mouth of the Kivalina River in the foreground on Monday, Feb. 16, 2015.

Some Alaska villages perched on thawing and eroding permafrost may have to move soon to more solid ground inland, a daunting prospect.

So will residents, on their own, abandon their threatened communities and avoid the need to pay for such costly community relocations?

Populations in some of the most imperiled villages are actually increasing as families settle in and new generations expand, according to a newly published demographic study.

The trends underscore the urgency of relocation planning, funding and action, said University of New Hampshire sociologist Lawrence Hamilton, lead author of the study published in the journal Population and Environment.

"If somebody thinks that we'll do nothing and the problem will solve itself, it's really the opposite of the truth," he said.

The study evaluated population trends in 43 Arctic and Western Alaska villages. In all, the population increased from about 29,000 in 1990 to nearly 36,000 in 2014, the study found. The trend holds for villages facing dire climate-related problems, where residents have been called potential "climate refugees," as well as those with less serious impacts.

In Shishmaref, a rapidly eroding Inupiat village in Northwest Alaska that has become a poster child for Arctic climate change, the population grew by a quarter from 1990 to 2014, even as erosion ate away at the island on which the village is located, the study found. In Kivalina, another Northwest Alaska village on an eroding and storm-battered barrier inland and the subject of a flyover by President Obama last year, a recent baby boom has strained the local school.  In Shaktoolik, where storm surges have become more severe as the Bering Sea ice diminishes, the population has grown by more than 50 percent since 1990.

Not even the "Great Recession" of 2008 and the concurrent spike in energy prices, which hit rural Alaska especially hard, slowed population growth, the study found.

"People might be voting with their feet," Hamilton said. "But again, that doesn't seem to be happening."

The growth is attributed entirely to births. There was net out-migration of adults in most years from 1990 to 2014, and deaths took tolls on village populations. But those factors were far outweighed by arrivals of newborns.

There are some compelling reasons to go, like increasingly severe floods that put people's safety at risk, Hamilton said.

And there are some practical and cultural reasons to stay.

In Kivalina, for example, store food is prohibitively expensive and residents rely heavily on wild harvests.

"Seventy-nine percent of our foods come from the land and the sea," said Janet Mitchell, Kivalina's city administrator.

If residents do move, the destination for most will be nearby,  Mitchell said.

"This is my home, and even if we do move from the barrier reef, we'll still come back to get food as we did 100 years ago," she said.

A move to Anchorage or some other big city makes little sense for most villagers, who lack the "certain type of skill or expertise or degree" needed to afford urban life, she said.

Sally Russell Cox of the Alaska Division of Community and Regional Affairs sees positive signs in the demographic trends.

In the short term, more children can mean more funding clout, as Alaska disperses state education funding on a per-student basis, said Cox, who is working with climate-affected communities to develop erosion-control and relocation plans.

In the longer term, the expanding and young populations signal cohesive communities with strong ties to the lands of their ancestors, Cox said.

"If you can make the case that you've got a young, growing population, it does speak to a vibrant community," she said.

Village relocation ideas have been on the table for years. The U.S. Army Corps of Engineers has identified 12 communities where partial or complete relocation should be considered, with estimated costs that run into the hundreds of millions of dollars for each village. Obama earlier this year asked Congress for $400 million for village relocation.

Progress has been slow.

In Shishmaref, where houses have already been lost to the sea and others are on the brink and where the U.S. Army Corps of Engineers in 2006 predicted that erosion could make the community "no longer viable" within 15 to 25 years, residents fully intend to move. They have yet to decide on a suitable destination but four sites are being considered.

In Shaktoolik, residents are trying to stay put as long as possible and protect themselves from floods and storms with coastal barriers and other protections.

Kivalina's new community site has proved unsuitable, forcing a restart to relocation planning, Mitchell said. Meanwhile, the focus is on a new school to relieve overcrowding and an access road to the school that would double as an emergency evacuation route.

The new demographic study does not include Newtok, the sole Alaska village that has started its relocation. The Yup'ik village on the eroding Ninglick River is transitioning to a new site, called Mertarvik, where some houses and community buildings are already in place.

Among the 43 villages evaluated in the demographic study, growth is not universal. In Unalakleet on the Bering Sea coast, for example, there was a sharp drop after 1999, attributed by the study to a fishery crash.

The idea of climate refugees moving entire communities is not exclusive to Alaska. Low-lying Pacific island nations, for example, are at risk from rising seas and eyeing their own community relocations.

Nunavut and other parts of Arctic Canada, now the focus of a new study by Hamilton and his colleagues, have some similar problems. While erosion is not as acute as in Alaska, the Canadian communities are coping with permafrost thaw, he said. Some communities have been also running short on food as opportunities for traditional harvests are diminished, according to the Nunavut territorial government.