Luxury cruise ship sets sail for the Arctic from Seward 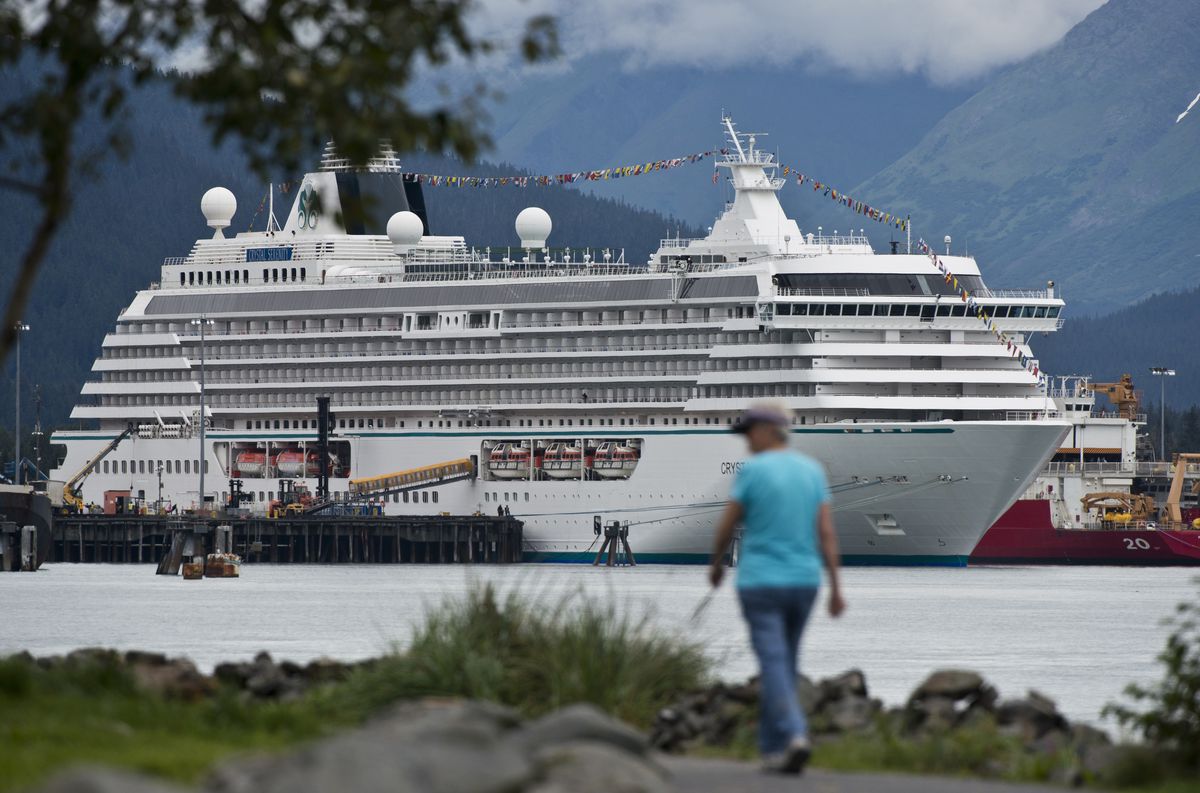 The Crystal Serenity, a Crystal Cruises vessel, is docked in Seward on Tuesday. The luxury cruise ship is on its way to New York City via the Northwest Passage. (Marc Lester / Alaska Dispatch News)

The Crystal Serenity, a Crystal Cruises vessel, is docked in Seward on Tuesday. The luxury cruise ship is on its way to New York City via the Northwest Passage. (Marc Lester / Alaska Dispatch News)

The once forbidding Arctic region, home to polar bears and ice-covered seas, has melted enough that this summer, it's open not only for shipping but high-end tourism.

The proof lies in the Crystal Serenity cruise, a luxury tour of the Arctic that promises to carry passengers through the storied Northwest Passage and across the roof of the world. The controversial cruise was scheduled to set sail Tuesday from Seward, Alaska, and dock 32 days later in New York City.

Scientists have long predicted this moment, although as recently as last year, a scientific study found the Northwest Passage would remain too unpredictable for regular shipping for some time to come. But that hasn't stopped some commercial shipping vessels from already making the journey. Nor did it stop the planning for the Arctic's inaugural cruise – a journey that will mark the first case of mega-scale tourism in one of last virtually untouched landscapes left in the world.

As many as 1,700 passengers and crew were expected to be on board the Crystal Serenity, which will transit the Bering Strait and visit Greenland. Tickets for the historic journey started at about $22,000 and went into the six figures. That price doesn't include extras that guests can book, such as a helicopter ride or side excursion to a Greenland glacier.

Despite the cost, the trip sold out quickly, and the company behind it said a second journey is already in the planning.

[What the Crystal Serenity's journey through the Arctic means for Alaska]

The location might be the Arctic, but the Crystal Serenity's 1,100 guests aren't exactly roughing it. The $350 million ship is 820 feet long and has 13 decks and 535 state rooms. It has a driving range and putting green, a casino, a movie theater, half a dozen restaurants, multiple pools and a library with thousands of books, games and DVDs. There's also a spa, fitness center, hair salon and 24-hour complimentary room service.

More than anything, the cruise is a symbol, a harbinger of the tourism and commercial traffic that is likely to fill the once-isolated, ice-choked waters of the Arctic. Many scientists have projected that the ocean could become virtually free of ice during summers at some point, perhaps as soon as the next few decades.

That would leave the passage open to a wave of ships that could transform what, until now, has been among the least traveled places on Earth. Such a scenario has caused angst among those eager to explore the Arctic as well as those who want it protected.

The expedition also has raised safety concerns. The Northwest Passage is extremely isolated and remote. The small towns that dot its shores could hardly handle an influx of patients if there were a major medical emergency. And were the ship to somehow get stranded or need help, sending aid could be dangerous, uncertain and massively challenging.

"If the entire ship – all 1,000 passengers, all 600 crew – require search and rescue, for instance, if the ship sinks, then that would actually break the Canadian search-and-rescue system," Michael Byers, a research chair in global politics and international law at the University of British Columbia, told the CBC news.

"The area is plagued by a lack of adequate nautical charts, virtually no navigation aids, poor communication systems, and a lack of infrastructure," Roger Rufe, a former vice admiral of the U.S. Coast Guard, said recently. The Bering Strait, which includes a passage as narrow as 55 miles in one location, is of "principal concern," he said.

Even as the first cruise begins, the Coast Guard is continuing to study the safety and efficiency of navigation through the strait. A report is expected soon.

"The (Crystal Serenity) is the most recent example of why the Coast Guard's port access route study can't come soon enough. Rules of the road are essential for getting ahead of shipping and preventing accidents and impacts, rather than reacting after the fact," said Henry Huntington, director of Arctic Ocean projects at the Pew Charitable Trusts.

That's not to say there hasn't been huge amounts of preparation for the voyage. U.S. and Canadian government and Coast Guard officials have worked closely with Crystal Cruises to plan for the trip – and for any emergencies that might arise along the way. The ship will be accompanied by an ice-breaking boat and two helicopters.

"Crystal Cruises has safely operated its ships routinely in remote areas, including long trans-oceanic voyages for over 25 years, and, in fact, the Northwest Passage is not as remote as one might expect," said Paul Garcia, director of global public relations for the company. "During the transit, Crystal Serenity will be passing many communities, including ones where commercial jets provide regularly scheduled air service. Furthermore, Crystal Serenity plans to transit during the period of when ice concentration is minimal. … Anticipated ice conditions are within safe operating parameters for Crystal Serenity."

The ship will be getting constant updates from the Canadian Ice Service, Garcia said. It features "two ice searchlights, forward looking sonar, a thermal imaging camera and software to improve the ability to pick up small contacts on the radar such as small amounts of ice."

Yet two researchers told the Washington Post Monday that the passage is hardly ice free – which is not to say that it's anything the ship can't handle.

"The southern route (Amundsen's route) is now fairly clear of ice, but that does not mean no ice at all," Mark Serreze, who heads the National Snow and Ice Data Center in Boulder, Colo, noted by email. "Last I checked, ice could be seen (broken up floes) in … satellite images. Today, it is pretty cloudy in the region, so it's hard to pin down what is going on. However, I expect that the ship will be able to navigate."

Christian Haas, a researcher at York University in Canada, consulted Canadian Ice Service data and added that some ice remained in the southern Beaufort Sea plus Peel Sound and significant ice in Victoria Strait and M'Clintock Channel. "From our surveys we know that the ice in Peel Sound is only first-year ice and will probably disappear soon and completely," Haas said via email. "However, the ice in the other regions are remnants of multiyear ice, and thick chunks of that will very likely survive the summer. Apart from those well defined ice regions, there will be chunks of ice lingering here and there."

But then, perhaps that's just what Crystal Serenity's passengers are paying for.