Could this giant polar bear skull be the legendary 'weasel bear'? 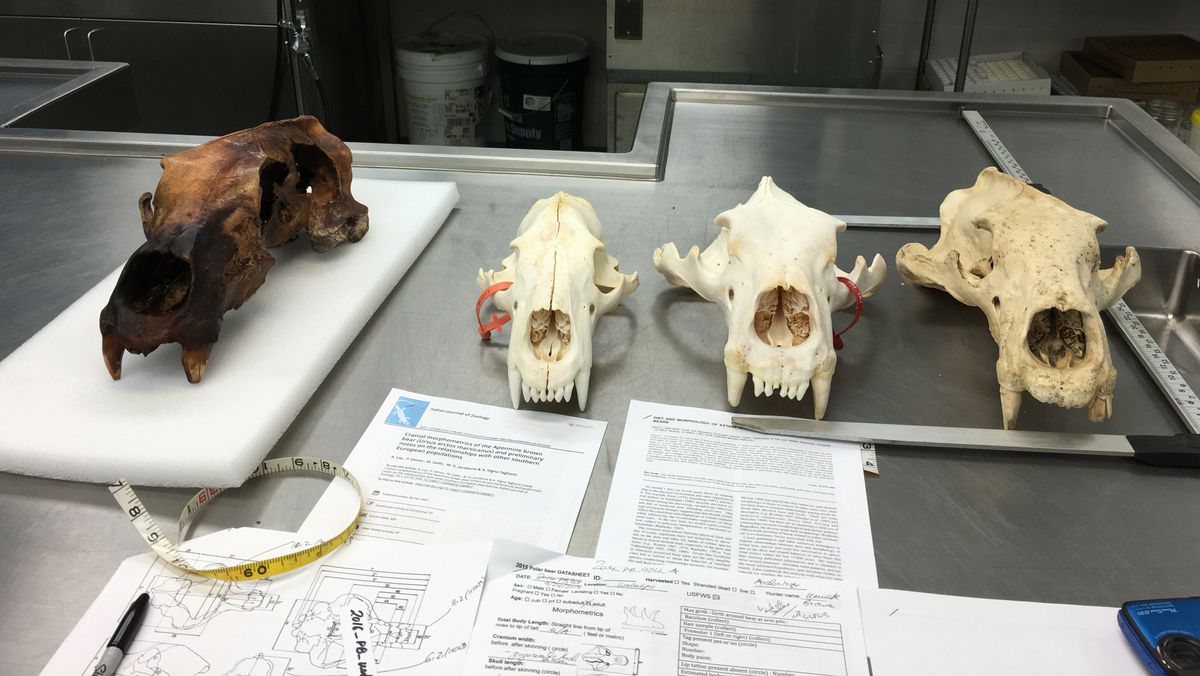 A huge, unusually shaped polar bear skull, left, emerged in 2014 from an eroding archaeological site southwest of Utqiagvik. It is quite different from most modern polar bear skulls, right. (UIC Science)

A huge, unusually shaped polar bear skull, left, emerged in 2014 from an eroding archaeological site southwest of Utqiagvik. It is quite different from most modern polar bear skulls, right. (UIC Science)

Aboriginal hunters from Arctic Canada have a couple of names for what they say is an extremely rare polar bear that is huge, narrow-bodied, fast-moving and lithe: "tiriarnaq" or "tigiaqpak," meaning "weasel bear."

Now the thawing and rapidly eroding Chukchi Sea coastal permafrost has produced evidence that one of these legendary weasel bears — or some other strange kind of bear — roamed Arctic Alaska centuries ago.

A huge, fully intact and unusually shaped polar bear skull emerged in 2014 from an eroding archaeological site about 13 miles southwest of Utqiaġvik (Barrow).

It is one of the biggest polar bear skulls ever found — and quite different from most modern polar bear skulls. It is slender, elongated in the back and has unusual structural features around the nasal area and other areas.

"It looks different from your average polar bear," said Anne Jensen, an Utqiaġvik-based archaeologist who has been leading excavation and research programs in the region.

Through radiocarbon dating and subsequent analysis, Jensen and her colleagues estimate that the big bear skull — which appears to be the fourth largest ever found — is from a period between the years 670 and 800. It is possibly the oldest complete polar bear skull found in Alaska, inspiring a name for the departed creature that owned it: The Old One.

Exactly what accounts for its differences is yet to be determined; genetic testing is needed for that, Jensen said. It could have been a member of a subspecies or a member of a different "race" in genetic terms — similar to the varying breeds that are found among dogs — or possibly something else entirely, said Jensen, who works for the science department of the Native village corporation,  Ukpeaġvik Iñupiat Corp., or UIC.

The Old One's skull was only one of several treasures newly found at the now-eroding site, which is called Walakpa and has been known to archaeologists for at least half a century.

The newly split-open bluff revealed another first-in-Alaska discovery – four mummified seals, naturally preserved in an old ice cellar. Jensen's group was able to retrieve one of them last summer, an adult female that has been given the French name Patou.

The excavated seal was much more modern than the polar-bear skull, dating back to only the mid-1940s. Still, it and the other seals amounted to a startling find: They are the only mummified seals ever discovered outside of Antarctica's Dry Valley, Jensen said.

The retrieved seal is fully recognizable, with its fur and claws still intact. "It's essentially freeze-dried," she said. "Basically, it looks like something that's got really bad freezer burn."

The Walakpa site dates back to the Birnirk culture that arose in about the year 600 and spread from Chukotka, on the northeast of Siberia, to Alaska in subsequent centuries. The Birnirk people, though they hunted whales, were not whaling-dependent, Jensen said. It was only later, in the successive Thule culture, that people became organized and skillful enough at hunting whales to make whaling the center of their lifestyle, she said.

The Walakpa site was excavated initially in 1968 and 1969 by Smithsonian anthropologist Dennis Stanford. For many years, his work, conducted when the climate was colder and the ground was more hard-frozen, was considered to have been utterly thorough. "Everyone had the opinion — I was one of them — that he had pretty well excavated the site and there was nothing left to be done," Jensen said.

The closed-up site was also considered to be intact and relatively safe from erosion and thaw, unlike the crumbling Nuvuk site at Point Barrow, where Jensen has focused her efforts for years. At the Nuvuk site, bodies buried in grave sites dating back to the Thule era have been at risk of falling into the ocean. Jensen has led several field seasons to save the bodies, which are buried in the local Utqiagvik cemetery, and also save other ancient items.

Things changed at Walakpa at the end of summer in 2013.

"The face fell off the bluff and a house popped out," Jensen said. She and a small team were able to excavate only a little bit of the area before conditions became too hostile for further work.

Then In 2014, "there was a huge collapse," slicing about 90 feet of soil away, Jensen said. That was the year that a local resident found the bear skull, though it is not clear when it was exposed.

The following year, Jensen was able to lead a small group to do more work at the site, thanks to some cobbled-together funding. The longest stretch of work came last summer, when Jensen had enough funding and enough time and site help from students to put together a three-week field season. By then the house exposed in 2013 was gone, but much more was revealed.

"The stuff is in beautiful shape," she said. It is "in effect, a frozen tissue archive" with information that can fill in details about Arctic life thousands of years ago, she said.

The good condition of the artifacts is only temporary. As thaw and erosion occurs, items fall into the sea or, if exposed to the air, are at risk of decay.

Even if they are not exposed to air, artifacts can be vulnerable to below-ground degradation, Jensen said. As soils warm, bacteria are better able to decompose bones and other items. Even worse, warming soils can bring the items to a point where they generate their own heat, speeding the decomposition process.

With open water present up to eight months of the year instead of two and with temperatures rising and shorelines crumbling, the threats to the archaeological sites are increasing exponentially, Jensen said. Sites are eroding at a rate that far outpaces the normal grant process used to secure funding for work, and some new emergency approach is probably warranted, she said.

"It's like the library is essentially on fire — now," she said.