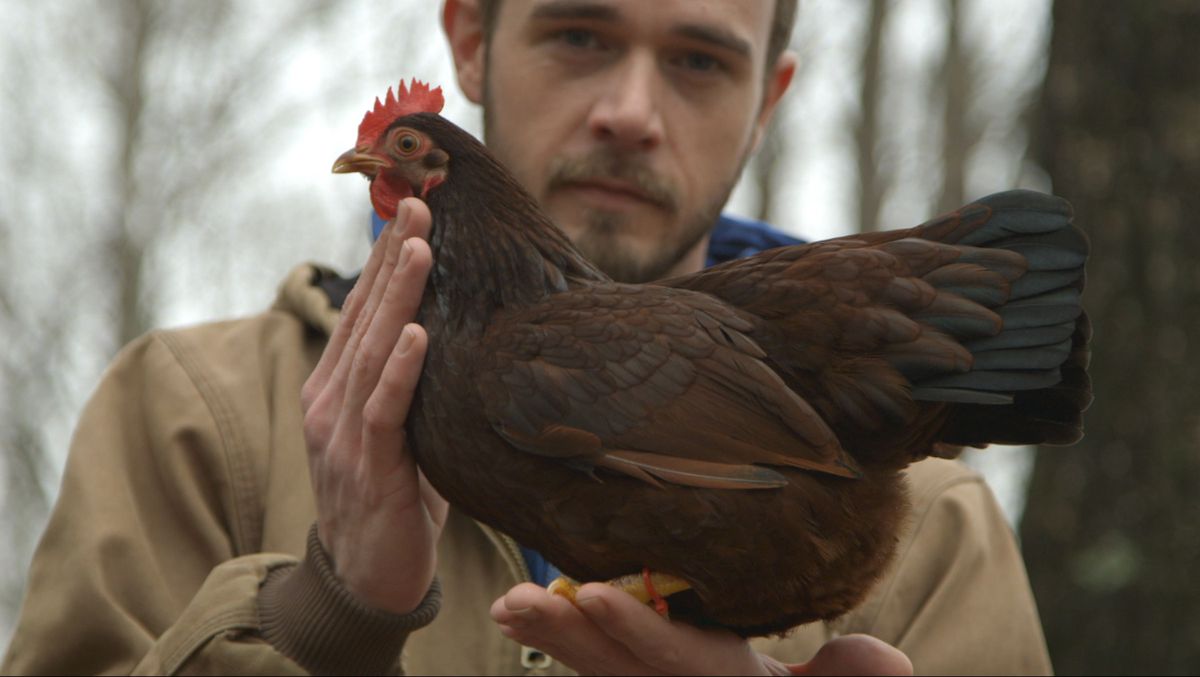 Billed as the biggest showcase for nonfiction cinema in moviedom, Homer Theatre's 13th annual Documentary Film Festival will start on Thursday, Sept. 22. The opening-night gala on Sept. 22 will include a barbecue dinner, preview of films to be screened during the week and a screening of "Maya Angelou: And Still I Rise," the first feature documentary about the poet. It will be shown only once more during the festival, at 6 p.m. on Sunday, Sept. 25.

Other films to be shown at the Homer Theatre — said to be the oldest continually operating movie palace in Alaska — include the Country Music Television's "Chicken People," a fascinating and delightful look at the intense world of championship chicken breeders. It focuses on the huge Ohio National Poultry Show, considered the equivalent of the Westminster Dog Show, except for chickens. The best of the brood rather than the best of the breed.

The rest of the offerings are more or less serious, unless you're among the people serious about chickens as something other than an entree. "My Love, Don't Cross That River," a love story about a Korean couple approaching the century mark; "Music of Strangers," about cellist Yo-Yo Ma's Silk Road Ensemble; "Zero Days," about the origin of cyber warfare; "Obit," about reporters who have the dead beat at the New York Times. There's a film about whaling in the Faeroe Islands ("The Islands and the Whales"), an autistic boy who communicates via Disney cartoons ("Life Animated") and a biography of Norman Lear subtitled "Just Another Version of You."

Following up on last week's item about the vandalism of the Burning Basket temporary art installation on the Homer Spit in 2015, the Homer News has reported that this year's basket was also the target of yobs who tried to torch the construction of driftwood, dried grass, sticks and other combustibles in the early hours of Sept. 10, one day before it was due to be formally ignited in a public ceremony.

The redoubtable Michael Armstrong reported that organizer Mavis Muller and others were camped near the basket but were unaware of any suspicious activity when the fire was set. The vandals succeeded in burning a significant part of the front of the structure, which included a large heart shape, and parts of two sides. The fire burned out on its own and no suspects were identified.

Volunteers quickly made such repairs as they could and the official burning took place as scheduled on Sept. 11. A YouTube video (youtube.com/watch?v=xskbpeH62zE) taken Sunday shows an enthusiastic crowd present for the ignition, which was accompanied by vigorous drumming and cheering as fireworks shot forth from the blaze.

Whale House posts worth the pilgrimage

I missed the Homer hoopla because of a quick road trip to Haines, or rather to Klukwan, the Tlingit village 20 miles north of the city. Since learning of the opening of the Jilkaat Kwaan Heritage Center this spring I had made it a priority to get there as soon as possible to see the ancient carved pillars from the Whale House. The sculptures are 200 years old or older. They were the subject of several well-known photographs made around 1890-1900, and a five-part series published in the Dispatch News some years ago, now available at the Alaska Native Knowledge Network website.

The rational reader may wonder why someone would drive 1,500 miles round trip and go through customs four times to look at some totem poles. But I had been assured by qualified sources that the Whale House posts are no tourist shop curios, but world-class masterpieces.

My sources may have understated the case. The instant I glimpsed the Wormwood Post — only half of it, actually, as I was looking through a doorframe — I froze. I think I muttered something. It was a little hard to breathe for a moment. I'd seen photos, but photos do not begin to capture the glory of the art. The last time I reacted to a work of sculpture like that was when I got my first look at the Apollo Belvedere in the traveling Treasures of the Vatican exhibit 30 years ago.

The four posts represent four episodes from Tlingit lore. The legendary "Strong Man" (aka "Black Skin"), Raven and Salmon figures are familiar, the Sea Creature character less so, perhaps. But the Woodworm story seems specific to the Chilkat culture. The artistic unity, imagination and meticulous execution are unsurpassed anywhere. The imagery ranges from the fantastic to symbolic to startlingly realistic.

The posts are the work of Kadjisdu.áxch, the genius behind the Chief Shakes house carvings in Wrangell. I would not quibble with anyone arguing that they are the finest works of art in Alaska.

The Jilkaat Kwaan center is a new building with historical displays and an impressive wall of Chilkat weavings. There is still significant open space awaiting additional material that is expected to be included in time. The houseposts are set in a special room in the same configuration, though with smaller dimensions, as they would have been positioned in the original Whale House. The exterior features hand-planed planks. The facility has limited hours, but is open year-round. They're getting ready for an influx of eagle-spotters over the next few weeks.

After stopping by the museum I went to the Alaska Native Sisterhood hall for a pancake breakfast. The Klukwan Blueberry Festival was underway. The village has a population of about 80, I was told. The idea that so few have managed to accomplish so much with regard to preserving this art struck me as nothing short of awesome. The entire state owes thanks to the people who have created the center and the individuals and agencies from outside Klukwan who have assisted.

It had been 50 years since I last visited the town. At that time I recall seeing several old houses highly decorated in something like a cross between Victorian designs and Northwest formline art. On this trip I found only one, and it appeared deserted. The loss of this unique architecture made me feel all the more grateful that the Whale House posts have made it to the 21st century and are now safely in a venue where they can stun viewers for many years to come.

While in the neighborhood I stopped by the Sheldon Museum in Haines. It too has a good collection of Chilkat blankets, plus a number of baskets and carved spoons, as well as items from the town's military, commercial and missionary past. The museum is planning for an expansion.

It was all well worth the long excursion (plan on 15 hours driving one way), particularly when the weather turned nice on Sept. 10 and I rolled into Canada through scenery as delicious and mind-blowing as any on the globe. The customs people were all very nice, by the way, and the border checks were swiftly accomplished in a matter of minutes.

The Sealaska Heritage Institute has received a grant of $927,000 from the federal Administration for Native Americans to help pay for mentor-apprentice teams to study Tlingit, Haida and Tsimshian languages over the next three years. The program will connect two students with one mentor to immerse themselves in the languages, transcribe tapes of speakers in the possession of the Institute and participate in orthography and linguistics programs at the University of Alaska Southeast.

The new grant comes on the heels of a previous three-year program that did similar work in Yakutat, Sitka and Juneau, specifically focused on Tlingit. Participants in that program had a graduation ceremony last month.

Stars of the design world speak this weekend

The Anchorage Museum, Alaska Design Forum and several local professional design firms are collaborating on a weekend dedicated to the proposition that an effectively designed environment can make life in the far north a lot more livable.

The opening reception will take place at 5 p.m. Friday, Sept. 16 at the museum store, which fittingly has just finished its own redesign. A second reception will take place at the same time on the museum lawn, where the three top winners in the Alaska Design Forum's Future Tents Challenge will be set up for the weekend. Also on Friday, at 7 p.m. green do-it-yourself specialist Ben Uyeda of FreeGreen.com will talk about his ground-breaking green home designs.

At noon on Saturday museum designers will lead a tour showing firsthand how their ideas become reality. At 7 p.m. Eames Demetrios of the Eames Office will talk about his work and the classic furniture of Charles and Ray Eames, followed by a reception and book-signing. New York jeweler Blair Lauren Brown will be the speaker at 2 p.m. on Sunday.

This short list doesn't scratch the roster of talks on Alaska architecture, landscaping, floral arrangements, fabric art and a pop-up root beer stand that will take place at both the museum and several downtown locations. Some events are free, others are included with museum admission and some require passes to the Design Weekend event itself. More information is available at anchoragemuseum.org.

I hope everyone enjoyed summer as much as I did, but fall arrives next Thursday and, right on schedule, we're able to enjoy a raft of live arts. In the next few days I'll be attending plays at Cyrano's and Out North along with part of the Autumn Classics chamber music series at UAA. Anchorage Community Theatre's production of "Laura" opens on Sept. 23.

The Anchorage Concert Association's season will kick off on Saturday when Big Bad Voodoo Daddy returns to the Atwood stage.

Before the month is out ACA will also present jazz drummer Jamison Ross, the Anchorage Symphony will play its first symphony concert of the season and Perseverance Theatre will start a two-week run of "Peter and the Starcatcher."

We note this uptick in activity to remind readers who may have been putting it off to think about getting tickets. Local boogie-woogie fans will remember that Big Bad Voodoo Daddy sold out the house when they played here in 2011.

The Dorothy Page Museum is again hosting their "Brassieres to Nowhere" exhibit and auction to benefit the Alaska Cancer Care Alliance and is looking for artists to participate in the event. Bring bra-inspired art to the museum in downtown Wasilla between Sept. 27-30. There's a $10 entry fee (free for students) and the art must be ready to hang. The exhibit will be displayed Oct. 10-Nov. 5, with the auction taking place on the final day. More information is available at 907-373-9071 or at cityofwasilla.com/museum.