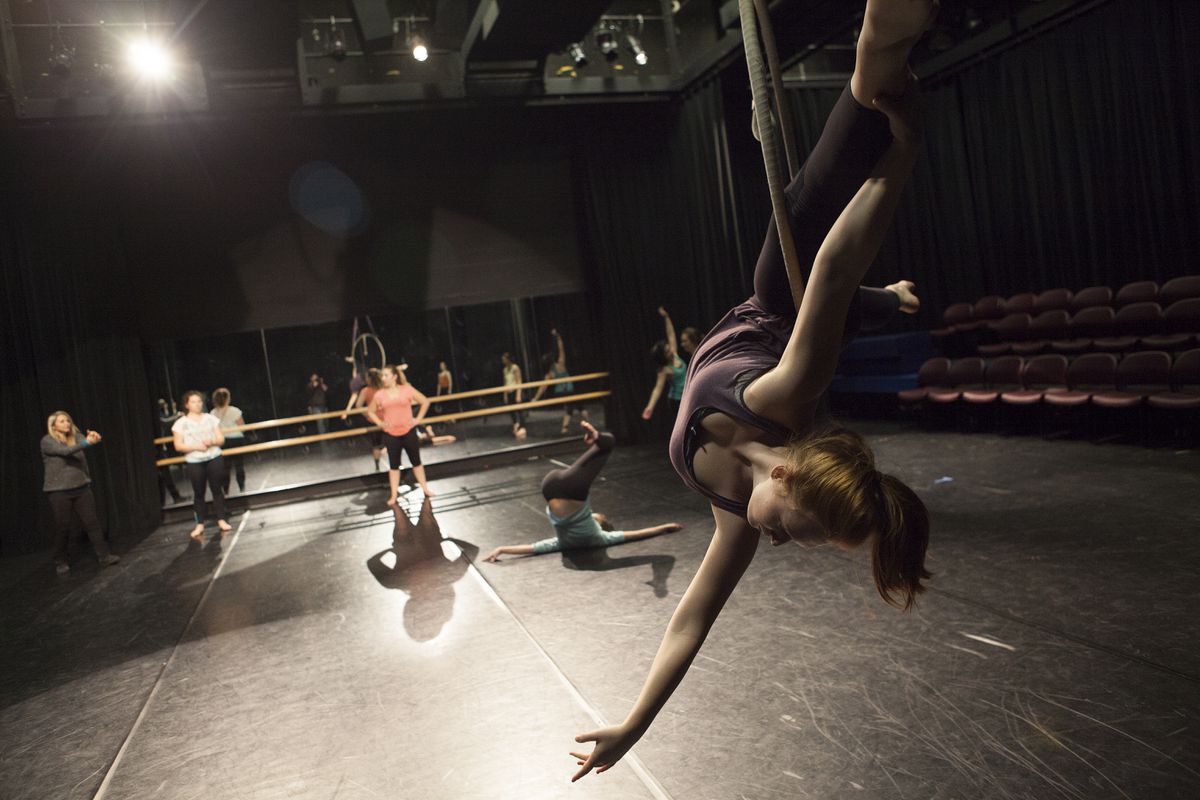 At an early rehearsal of "Reflections" in University of Alaska Anchorage's Harper Studio theater last month, dancer Marissa Citro hung upside down in a hoop suspended above the ground. Her arms gripped the sides, her head dangled toward the floor and her legs formed a "V" pointing at the ceiling. She looked like a human peace sign.

"How do I get down gracefully?" she asked choreographer Leisha Knight.

"Grab the hook, bring both feet into a pike and exit to this side," Knight replied. "Swing out."

Citro made her dismount and another dancer, Carmel Young, took her turn on the hoop. Knight wanted her to repeat a position she'd used in a previous rehearsal. "I remember it," Young said. "But I don't know how I got there."

The rehearsal went along with Knight instructing the performers on the fine points of acrobatic Terpsichore. "Open up into a back bend." "Do a straddle." "Balance your booty."

If it seemed more like a circus act than a modern dance rehearsal, there's a good reason. Knight is a former dancer and trainer with Cirque du Soleil. She's also a former UAA student.

Originally from Birmingham, Alabama, Knight came to UAA on a gymnastics scholarship. Competing first as Leisha Morgan, then as Leisha Jenkins, she earned All American honors and was named the outstanding woman gymnast at the USA Gymnastics National Collegiate Championship at Tempe, Arizona, in 2002.

Along with concentrating on her sport, she also took dance classes at the university. "My sisters were all dancers," she said. "When I completed my gymnastics career, it felt like a natural transition to move to dance."

She was watching a video of Cirque du Soleil, "and I thought, 'I can do what they're doing.' I had professional tumbling and acrobatics experience. So I made a video with my sister and submitted it to them."

A subsequent audition led to nothing — at first.

"Five years later they called me for a second audition," she said. "So I went there and, two weeks later, I was working on 'Love,'" a Cirque show that uses the music of the Beatles.

"I'm always on the road," she said. She'll be spending the winter in Vail, Colorado, and has work scheduled in Yosemite National Park next summer. "I also have addresses in Las Vegas and Alabama."

One of her three sisters (she also has one brother), Melissa Jabaay, also attended UAA, where she is now an adjunct professor of contemporary dance. Because of the family connection as well as school connections, Knight finds herself in Alaska every couple of years.

Her latest trip was to rehearse the UAA dancers for her work, which will open the "UAA Dance in Performance" series that runs Nov. 17-20.

In addition to "Reflections," the program will include six other pieces. Some are by Anchorage choreographers with long resumes. "Sunshine," by Brian Jeffery, assistant professor with UAA's Department of Theatre and Dance and former artistic director of Chicago's XSight! company, is designed to explore the individual personalities of the ensemble members. "Crossing the Line," by UAA graduate Becky Kendall, a driving force in Anchorage's Momentum dance collective, reflects on how conflicts escalate into war.

Other names on the program are less well known. Taylor Hicks' piece, "Cradled," addresses the loss of children and the challenges of protecting children. "The Power of One" by Stephanie Brenner is described as "a look into breaking out from the depths of stress and depression even if it means straying from the pack."

"Ascension" by Courtney Meneses and "Convalescence" by Racin Engstrom round out the announced program.

Of her own piece, Knight said the title is a direct reference to her concept. "The hoop can be a mirror," she said. In her notes, she quotes novelist William Makepeace Thackeray: "The world is a looking glass."

Her brief opportunity to get the choreography into the "muscle memory" of her dancers was a whirlwind process. She was only in town for a few days around Halloween. "It's a long weekend of work," she said, with five rehearsals to "set" the 10-minute piece and another three to "clear things up and get everybody on the same page."

Knight seemed confident, even comfortable, that the seven dancers would get the piece in their heads and limbs in such a short time, even though they were simultaneously working on other dances in the show.

"They all have a strong traditional dance foundation," she said. "And I think Brian (Jeffery) looked for students who might be interested in getting a certain 'circus' flair on their resumes."

Looking less comfortable was the hoop itself, made of an inch-wide tube. Dancer Citro explained that the trick was to avoid setting bone or cartilage in a way that it would take the brunt of the weight. "You're looking for a soft part of the body to set on the hoop."

Meanwhile, Young had climbed onto the device and was spinning with a smile on her face.