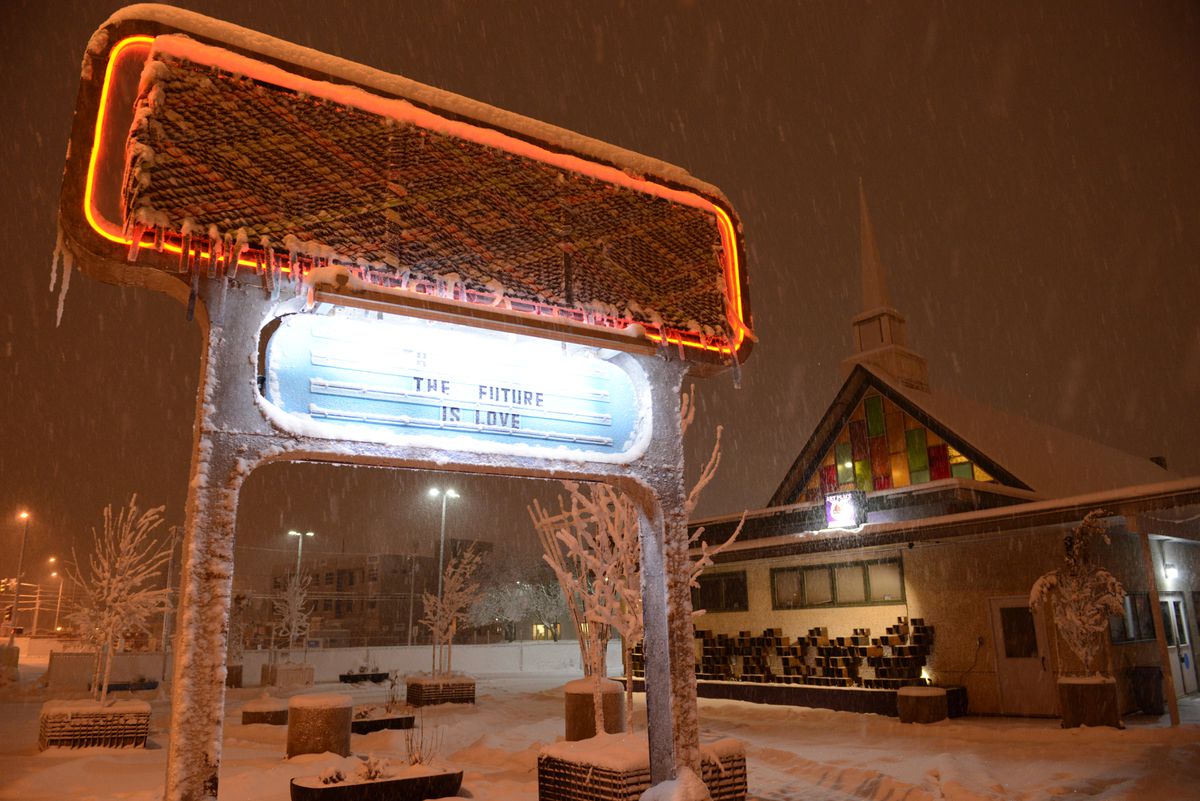 Snow falls on the Church of Love on Spenard Road in Anchorage, Alaska, on Friday, January 13, 2017. The church is the site of the photography show “Spenardia,” which features 7 photographers’ take on the Spenard area. The show opens Friday, Jan. 27 from 6-9 p.m. (Bob Hallinen / Alaska Dispatch News)

Snow falls on the Church of Love on Spenard Road in Anchorage, Alaska, on Friday, January 13, 2017. The church is the site of the photography show “Spenardia,” which features 7 photographers’ take on the Spenard area. The show opens Friday, Jan. 27 from 6-9 p.m. (Bob Hallinen / Alaska Dispatch News)

A photo exhibit displayed in an old church on Spenard Road this month puts a focus on the soul of Anchorage's oldest suburb. Images of people, dogs, well-lived-in houses and trailers, cars without doors and, of course, airplanes without wings parked in driveways, all speak to the homey quirkiness of Spenard and hint at how its personality may change or vanish in the future.

In some ways the venue itself, the "Church of Love" near Spenard and 34th Avenue, encapsulates the history, character and choices Spenard faces.

Originally called the Lake Spenard Baptist Church, it has been part of the cityscape since the 1950s, perhaps earlier. By Anchorage standards, it's ancient.

"We bought this building for the land," said Tyler Robinson, director of development planning and finance for Cook Inlet Housing Authority, the nonprofit organization that now owns the church. "We needed it for parking."

Dedicated to providing low-cost housing, CIHA has filled its main offices next door to the church and needs more space. It's acquired lots around Spenard and 36th, including a former gas station and the site of the once-infamous P.J.'s topless club, south of the offices, as well as the building that once held the Spenard post office, just north of the church.

The idea of immediately tearing the church down to make room for cars sort of got put on hold, however, as CIHA became interested in ways to make their "campus" more of a part of the larger community, Robinson said.

"We've since been able to test this building for a variety of purposes," he said, "a cultural commons, an intersection of arts and community."

In the recent past it became the work space for the "100Stone" project, which created scores of life-size statues of people later placed near the mudflats of Cook Inlet as an installation designed to draw attention to mental illness. Next month a play about homelessness, "Home, but not Less," will be presented in the space. At this time artist Ruby Jones is working in the basement on an installation that will later be brought upstairs for viewing.

The utility of the building for creative purposes stemmed from a $3 million grant from the national ArtPlace organization, which selected CIHA from among 260 applicants in 2015. The purpose of the grant was to "push arts and culture as a core segment of community planning and development," said ArtPlace director of partnerships Prentice Onayemi at the announcement party, held at a Spenard landmark, Chilkoot Charlie's bar.

The often-heard phrase for such visions is "creative place-making."

"Ultimately, the grant was not about art as much as how to visualize what art can do to help understand the community," Robinson said.

ArtPlace put an emphasis on having the grant recipients take the pulse of the neighborhood where they planned on applying it: discover what the needs of the community were, listen to the people who lived there and making an inventory of "cultural assets" in the area.

"You have to find out what is in a community to ask what's missing," said Oscar Avellaneda-Cruz, a photographer who was tapped to create a sort of cultural "map" of Spenard.

"I walked all over the place," he said. "I've lived in Anchorage 30 years. I was brought up here, and I found places I never knew about, trails, creeks, pockets of woods. There's a place behind Gwennies (Old Alaska Restaurant) with a pond and moose. When I stumbled into it I thought I'd found the Kincaid (Park) of Midtown."

Avellaneda-Cruz recruited several other photographers who fanned out and brought back pictures of unique Spenard visuals that became part of the show, "#Spenardia."

"It was like what we call a windshield survey," said Robinson, a process where cars drive through neighborhoods taking pictures through their front windows. "It was just a different way to do it."

In addition to the photos, the team contributed "artists statements" as part of the show.

"Spenard is at an interesting crossroads, experiencing change," wrote Shannon McGuire, one of the photographers in the project. "Places that have defined its reputation are going away. The neighborhood can go one of two ways, either uplifting the lives of those who live there, or displacing them."

The photographers couldn't help but notice the haphazard layout of the area. "Spenard has existed as a community without ever really being planned," wrote Greg Morgan.

"A lot of Anchorage is very rectilinear and rather boring," wrote Clark Yerrington. "In Spenard, streets are irregular and a bit jumbled up."

They also noticed a spirit in the denizens, from a lady famous for her window box flowers to bikers. "Even old vehicles on dilapidated property were in greater shape, or better shape than their surroundings," noted Jovell Rennie. "It seemed to demonstrate the pride people have in this neighborhood."

Spenard's a place where "you can feel comfortable in the local spots," wrote Danny Benesen. "There's lots of friendly people."

Other photographers on the project included Mollie Foster and Charlie Earnshaw.

In addition to the images and the photographer's written narratives about their impressions, the "Photovoice" project collected comments from people who attended the Friday viewings this month and portraits of them taken in a photo booth set up at the exhibit.

The "Photovoice" project is part of a process to get residents to talk about what problems and positives they experience in their built environments, said Sezy Gerow-Hanson, CIHA director of public and resident relations. "We're looking to see if there's a common thread, a theme that comes out."

Promoting art for art's sake is really not the mission of a housing agency, she said. "But we're using arts tactics to get to a non-arts outcome." Planners often grapple with issues like safety, transportation, getting to stores and schools. But they have traditionally spoken with a set group of experts in the individual fields and, predictably, received some fairly standard answers.

And so CIHA has offered the church to creative people at no cost, so far.

"We learn something each time we use it," said Gerow-Hanson. Concerns over lighting, acoustics and electric circuitry are brought up. "The artists are teaching us how to use this space."

At this writing, a wide range of future uses are under consideration. It might house the Spenard Jazz Festival, for instance. Part of it could be turned into small apartments.

Already, CIHA has used the space for meetings and potlucks, taking pressure off their tight quarters next door. The Alaska Humanities Forum held a brainstorming session there.

Eventually, upward of 100 housing units will be built on CIHA property kitty-corner from the church. "We always put a common community space in our housing," Robinson said. "But if we use this building as a community space, a cultural commons, we could put in two more units on the other side."

At this time CIHA is bringing on Asia Freeman, director of the Bunnell Street Gallery in Homer, to help explore the potential art usages of the church. "We're asking what makes sense? What gets people excited?" Gerow-Hanson said.

But the final resolution will also need to answer the question: What can be supported?

"There are a lot of older buildings in Spenard that might be reutilized, but we need to find out where the revenue is going to come from," Robinson said.

Avenues of financial stability, to use Gerow-Hanson's phrase, are required to keep the lights on, make repairs and complete upgrades. Old buildings may have character and utility, but they're often in need of fixing up and usually predate current building codes.

The Church of Love, for instance, which has housed different congregations since Harry Truman was president, is not compliant with the Americans with Disabilities Act. And the bathrooms are seriously out of date, Gerow-Hanson said. If the cost of putting it in shape exceeds the possible benefit by too much, then it's bye-bye Love, hello parking lot.

But the CIHA folks seem hopeful that the old church's higher calling will be realized. The previously vacant building has seen constant activity for the last year or more in a space that would have otherwise been empty, another dead cell in the body of urban blight.

"Creative place-making is a difficult thing to explain to people," Robinson said. He gestured with his hand, sweeping it in an arc in front of the pictures of "#Spenardia" that lined the walls.

"The only way anyone can explain it is to see it."

#SPENARDIA can be viewed at a reception on Friday evening, Jan. 27, at the Church of Love, Spenard Rd. and 34th Ave.