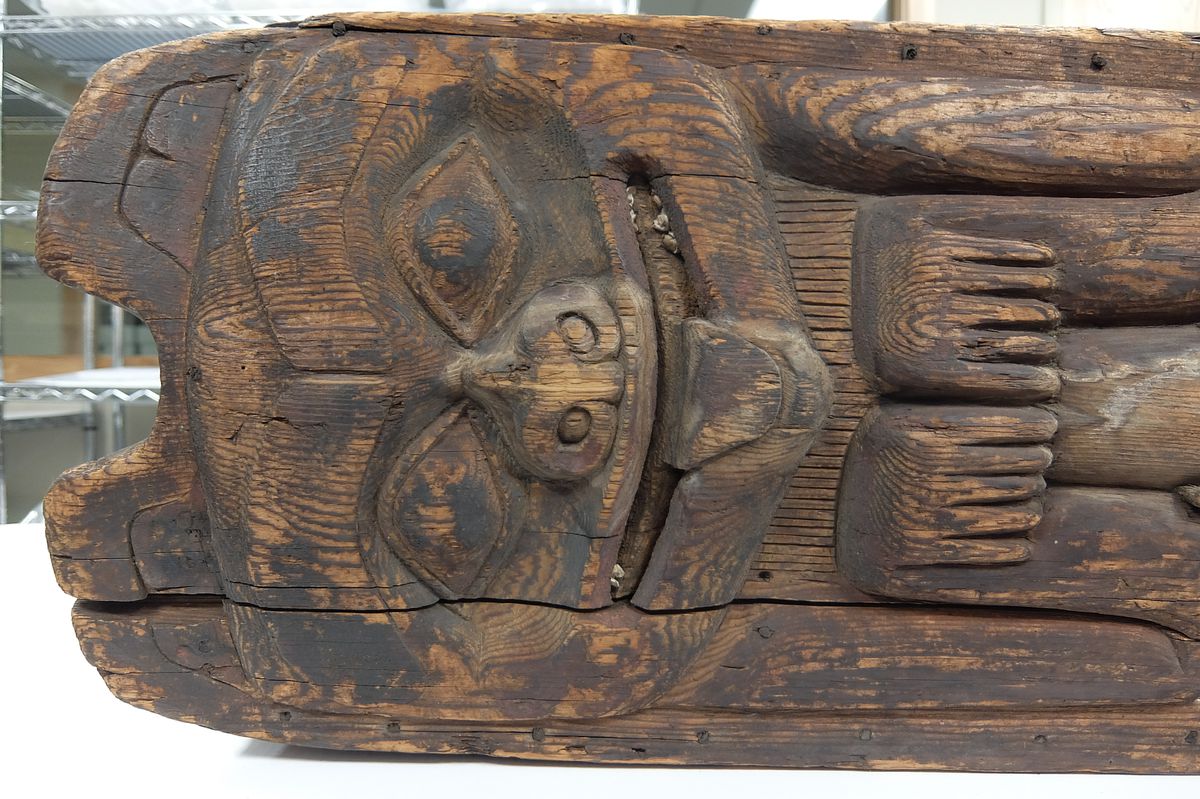 A timeworn Tlingit shaman's box drum dating back to at least the late 1800s may get new life.

The nonprofit organization Museums Alaska just granted Sealaska Heritage Institute $3,868 to get the repatriated object in exhibit-worthy condition and have it scanned by an infrared photographer.

The leader of the T'akdeintaan Clan loaned the instrument to the Sealaska Heritage Institute (SHI) in Juneau in 2016.

"It's a very old piece that is deteriorating so the clan is interested in putting it in a facility like ours that can look after it," said SHI History and Culture Director Chuck Smythe, who added the drum is most likely made of red or yellow cedar.

"We're excited to learn more about this very old, unique object. There aren't many of these drums in the northern Tlingit area."

The drum had mystical meaning, according to Tlingit-American art collector Louis Shotridge, who acquired the object in 1924 for the University of Pennsylvania Museum of Archaeology and Anthropology.

"He reported that it was originally a shaman's drum and represented the time when a T'akdeintaan shaman 'proved his spiritual power,'" Smythe said. "It was carved to represent his helping spirit, 'Old Man of War.'"

Bringing the drum back to how it looked in the days when the shaman played it isn't SHI's aim.

"We don't want to restore it because it has a life of its own," Smythe said. "All we want to do is what we can to have it live as long as it can in its current condition."

SHI has enlisted Skagway-based conservator Nicole Peters, who is currently  conserving objects for the Anchorage Museum expansion and new Alaska Exhibition, to assess and lightly clean the drum and offer treatment suggestions.

Revealing the underlying colors and form-line design will be the job of Brian Wallace, a former Juneau Empire photographer.

"We are hoping the infrared photographs will show what the original painted surfaces looked like," Smythe said. The infrared scans "will penetrate the layers and pull out the pigment."

Right now, the drum "is uniformly dark to black all around," Smythe said. "You can see there's a design on it but its very difficult to make out what it is."

Until Peters and the photographer arrive, Smythe and his colleagues are striving to keep the box drum intact. At the moment, they have to lay it on its side to stabilize it.

"Some of the edges are deteriorating and we're worried that it will break along the corners if we stand it up," Smythe said. "If it's stabilized, something could be put in it and we could stand it up, which would be much more realistic."

The project should be completed by this fall, Smythe said.

If all goes according to plan, the box drum will be housed in SHI's permanent exhibit, "Enter the World of the Tlingit, Haida, and Tsimshian Peoples," in the Nathan Jackson Gallery in the Walter Soboleff Building in Juneau.

Smythe and his colleagues do have a good idea of how the original box drum looked, thanks to German geographer and author Aurel Krause.

Krause sketched the drum during a visit to Hoonah in the late 1800s, and the drawing is in his book "The Tlingit Indians: Results of a trip to the Northwest Coast of America and the Bering Strait."

"We know it was made before 1882 because that's when it was seen by Krause, so its got to be older than that," Smythe said.

But Krause's sketch doesn't tell the whole visual story. It's in black and white and only shows the drum from one angle.

"We don't even know if it's the same image on both sides," Smythe said.

Krause's encounter with the drum was just the beginning of the object's complicated story.

Shotridge collected it in 1924, and six decades later it became part of a campaign to repatriate nearly 50 items back to Alaska from the University of Pennsylvania.

In the late 1990s, The T'akdeintaan Mt. Fairweather House, with the help of organizations including the Hoonah Indian Association, Huna Totem Corp., Huna Heritage Foundation and SHI, fought to retrieve the objects.

In 2010, the parties argued before the Native American Graves and Repatriation Act Review Committee that Shotridge's 1924 acquisition of the box drum and other objects was illegal because the T'akdeintaan Clan never agreed to sell the objects.

A year later, eight of the pieces were returned, including the box drum. The clan is still waiting for the rest.

"Under Tlingit customary property ownership law, these objects belong to the clan, not to an individual, and an individual does not have the right to alienate (sell) them without permission from the clan as a whole," Smythe said. "Somehow, Louis Shotridge acquired the items in 1924, but there is no bill of sale or other instrument that identifies who sold them. This remains a mystery."

Correction: An earlier version of this article incorrectly identified the recipient of the $3,868 grant from Museums Alaska as Sealaska. The grant was given to Sealaska Heritage Institute.