See life and literature through the Portal of Perception 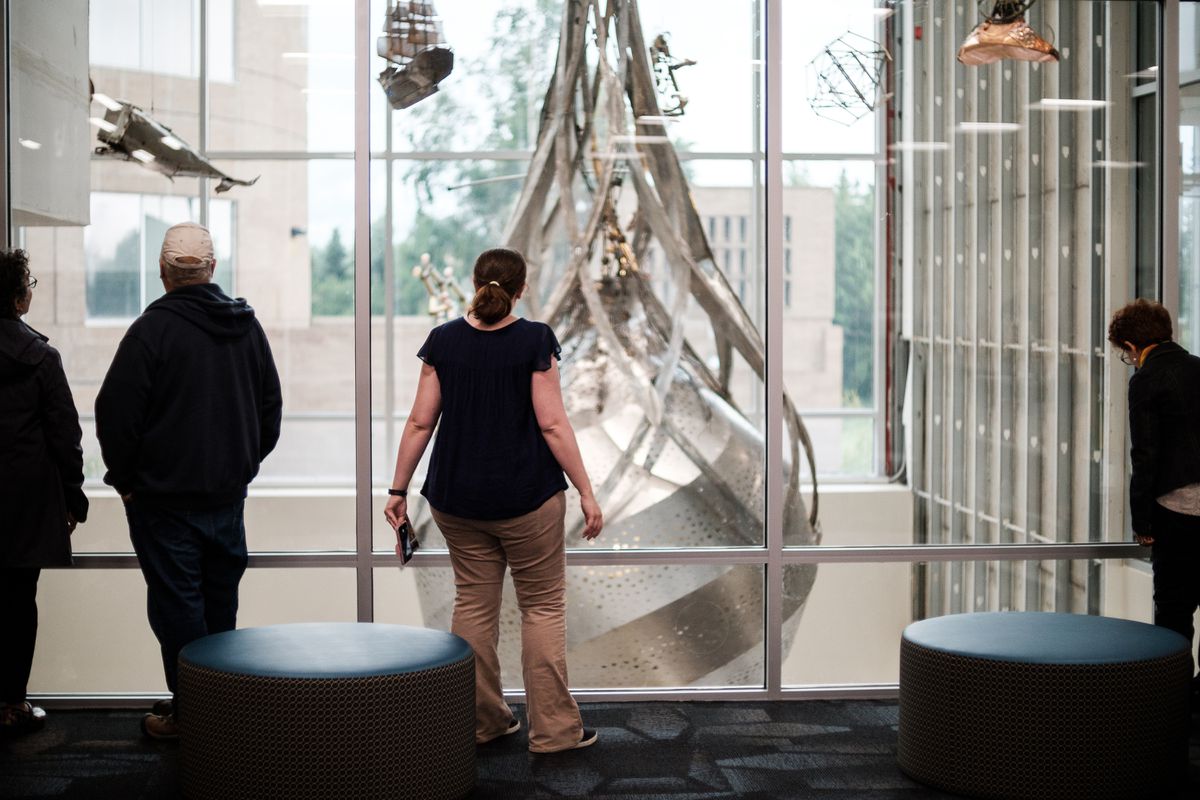 What if you could see what's happening in someone's head while they're lost in a book?

It might look something like the "Portal of Perception," a new hanging sculpture in the renovated Loussac Library.

Among the airborne articles are Moby Dick the whale; a whaling ship; the chemical compound for serotonin; the Alaska state flower, the Alpine forget-me-not; and a basswood and suede kayak made by local artist Andrew Abyo.

"They wanted a portal piece. That's what they were going for. We created this concept with the eyeball and your mind as a portal to other worlds. The whole idea is a neural network, and the little things around it are like ideas that come from books," said one of the Portal's creators, Portland-based artist Richard Crawley. "Out of over 160 applicants they thought our portal concept was the most portal-y."

Crawley made the sculpture with Dallas Swindle and Gustav Sculptor, his partners at Manifestation PDX Art Collective.

"This is our first public permanent piece. We've built a lot of festival sculptures and temporary things for Burning Man (in Nevada), The Symbiosis Gathering (in Oregon) and a lot of West Coast festivals," Crawley said. "The biggest challenge in making the Portal was embarking on a totally new direction and new technique. It was kind of a big gamble. And it worked out."

Each floor of the library offers a different perspective of the sculpture. On the first floor, people can look up into an infinity mirror and see their reflections framed with flashing lights. On higher floors, the floating objects and all the details come into closer view, like Lego men sailing on the ship.

"There are little surprises as you look at it," said the library's assistant director, Virginia McClure. "I'm crazy about the ship."

On Tuesday, when the library officially re-opened after a two-week closure, Anchorage residents Rita Spencer and Carol Morris offered their own interpretations of the piece.

"We were upstairs and we were looking at it trying to figure out what it is," Spencer said. "We thought it looked like a Christmas ornament. I think it's great."

Morris said she also wondered if it was a fishing net.

"What gave me the idea is the whale," she said. "I think it's pretty groovy. It's already growing on me."

The sculpture is one of three public art pieces in the renovated space. Alaska artist Owen Tucker was tapped to create a mural for the Kid's Zone, and Holly Nordlum, also an Alaska resident, was chosen to make exterior perforated panels for the building.

Crawley and his crew aren't from Alaska but tried to make up for it with sincere attention to detail.

"Richard wanted to represent Alaska culture in the objects. They were really mindful," said Enzina Marrari, curator of public art for the Municipality of Anchorage. "They didn't just want to replicate an Alaskan Native kayak. They wanted to work with a kayak maker to authentically portray that, so they commissioned Andrew Abyo."

The artists also worked with the Museum of the North in Fairbanks for help with a wooden skeleton of the duck-billed hadrosaur, which once lived on the North Slope of Alaska.

"Pat Druckenmiller, who discovered it, sent us pictures," Crawley said. He added that his co-artist Dallas Swindle used the photos to create a 3-D computer image of the skeleton.

Marrari said the budget for all the library public art projects was $106,000, with $73,000 going toward the "Portal of Perception."

In summer 2015, the Municipality of Anchorage 1 Percent for Art public art program sent out a call for artists to design pieces for the renovated library. The call said the pieces must have a portal theme.

"Through the concept of a portal or conduit, the library works to bring the outside in and connects the diverse communities within Anchorage and the broader global community," the call indicated.

A jury of nine then reviewed the submissions, and the "Portal of Perception" was a standout among a flood of impressive proposals, Marrari said.

Crawley and his fellow artists saw the completed, installed sculpture for the first time at a reception earlier this week.

"We were stoked," Crawley said. "It is greater than the sum of its many amazing parts."