Guitar hero: Eric Howk of Portugal. The Man is a rock star with a cause 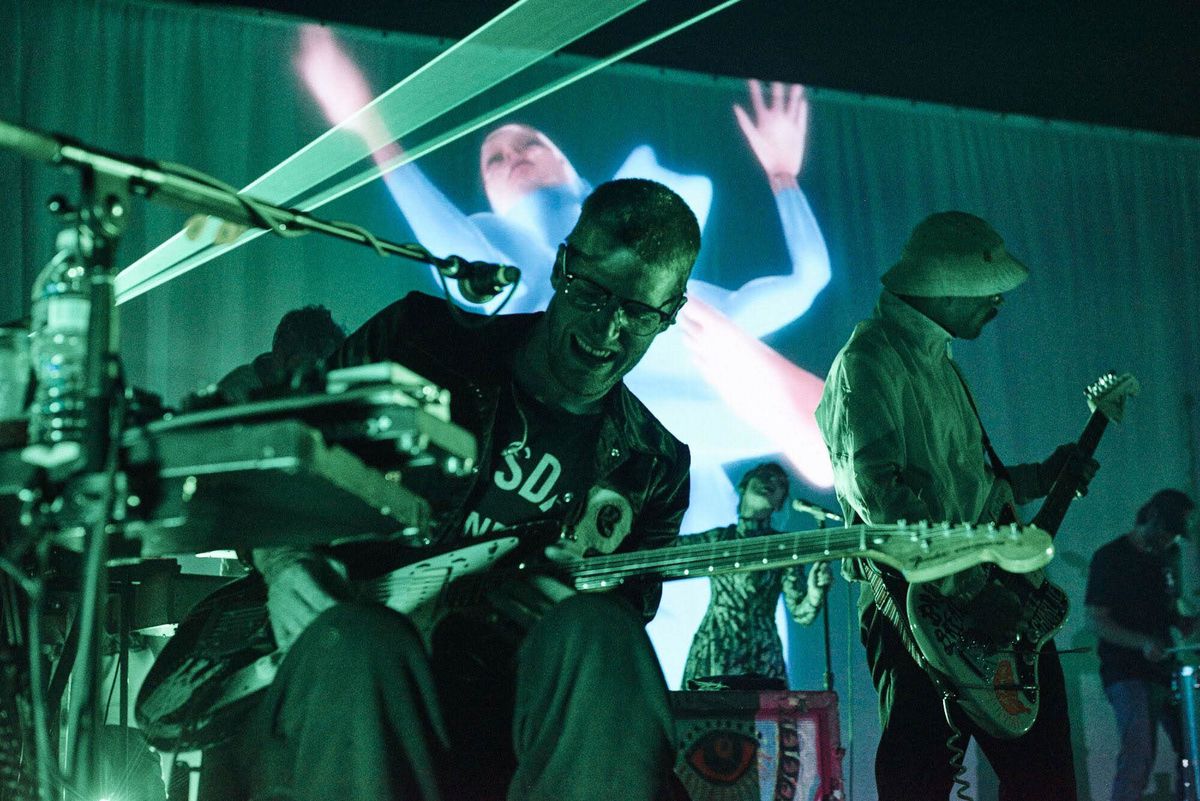 Guitarist Eric Howk, who grew up in Wasilla, was sunbathing before a show at The Orange Peel in North Carolina, when a fan of his band Portugal. The Man spotted him and started shouting.

"A middle-aged gentleman was leaning out the window of a minivan yelling a request to me for the show tonight. He wanted us to play 'Children,' " Howk, 36, said via phone from Asheville, North Carolina. "I don't know if we'll get to that. I'll put it in the hat. I'll make a gentle suggestion."

[Alaska's Portugal. The Man is back in the spotlight with new single 'Feel It Still']

Hailed by Hoda Kotb on national TV, co-opted for Vitamin Water and iPad commercials, and recently performed by the band on "Conan" and "Jimmy Fallon," the certified gold single has transformed the band from a cult favorite to a major musical force.

"The band has made some noise in the past but never had a song that got as far-flung as 'Feel it Still.' It's just taken on a life of its own in a really cool way," said Howk, who currently lives in Seattle. "I couldn't ask for a better group of friends to do this with. I've got two guys in the band that I grew up with. You can't invent that sort of familiarity. We're all going through this insane sort of moment together collectively and doing our best to keep each other in check and keep perspective."

The two guys to whom Howk refers are Portugal co-founders and fellow Wasillians John Gourley (guitar and lead vocals) and Zach Carothers (bass), who formed the band in Wasilla in 2004.

The band, which is now based in Portland, Oregon, and has released eight studio albums, has gone through many member changes since the beginning.

In the midst of the "Feel It Still" moment, Howk, who suffered an injury 10 years ago that left him paraplegic, is using his experience and influence to advocate for fellow Americans with disabilities.

Last week, he and Carothers met with kids at the March of Dimes in Toronto, Howk said.

And earlier this year, Howk was asked to record online and radio PSAs for the National Telecommuting Institute, a nonprofit founded in 1995 that helps connect Americans with disabilities with job opportunities.

The PSAs, which are layered over tracks from "Woodstock," are being broadcast on nearly 40 stations in the Lower 48, according to NTI's Associate Director of Marketing Mike Sanders.

"I had a chance to listen to their music and I thought (Howk) would be a really perfect representative and it could be a good symbiosis between both of us," Sanders said. "He's a very nice person, very laid back, very professional. Through his words he really extends our reach."

Howk said agreeing to do the PSAs was a no-brainer.

"I don't know of many other programs in the country that do what they do," he said. "If you have a voice and you care about something, you sort of have an obligation to use it."

The accident that left Howk paralyzed from the sternum down happened in 2007 when he was 25.

He said he was sitting against a retaining wall in a friend's Seattle backyard when the wall suddenly fell back and took him with it.

Howk dropped 12 feet into a hidden construction hole and slammed against the slab of concrete at the bottom. The pit was shrouded by shrubbery, and there were no markers indicating its presence, Howk said.

He broke three vertebrae in his back and quickly sensed that he may never walk again.

"I think I knew right away," Howk recalled. "That's a hell of a fall."

While he was being loaded into the ambulance and transported to Harborview Medical Center's trauma center, he was completely conscious, Howk said. What he overheard on the ambulance trip confirmed his fears.

"I'm not a doctor, but when you hear things like 'severe spinal trauma' and 'severing of the spine' you kind of put two and two together," he said.

Howk soon started rigorous rehabilitation. His former band, The Lashes, was booked to play a festival in about four months and he wanted to be up to the task.

"There was no question that I was going to play that. No one would even entertain the notion that I wouldn't play it," he said. "I just worked my (rear-end) off in rehab and got as strong as I could and kind of relearned how to play guitar with different posture and different positioning. I have a fairly high injury; high up my back, which means I don't have a lot of stability. So I kind of had to learn how to lean into it and keep myself propped up without flopping over."

"We still don't have an accessible tour bus. It's hard to find one that can sleep 12 people and has a big bathroom and a wheelchair lift," he said. "We sort of managed to find ways to get me on to the bus and onto a bench and comfy to sleep. … This is what I'm supposed to do and I'm very stubborn and there's nothing I won't do to get back to what I love."

Howk is reluctant to label himself a role model.

"Let's not go that far. I can be visible and I can be relatable," he said. "I think (being visible) is probably the most important thing about handling disability in America. It's still sort of taboo and I don't want it to be."