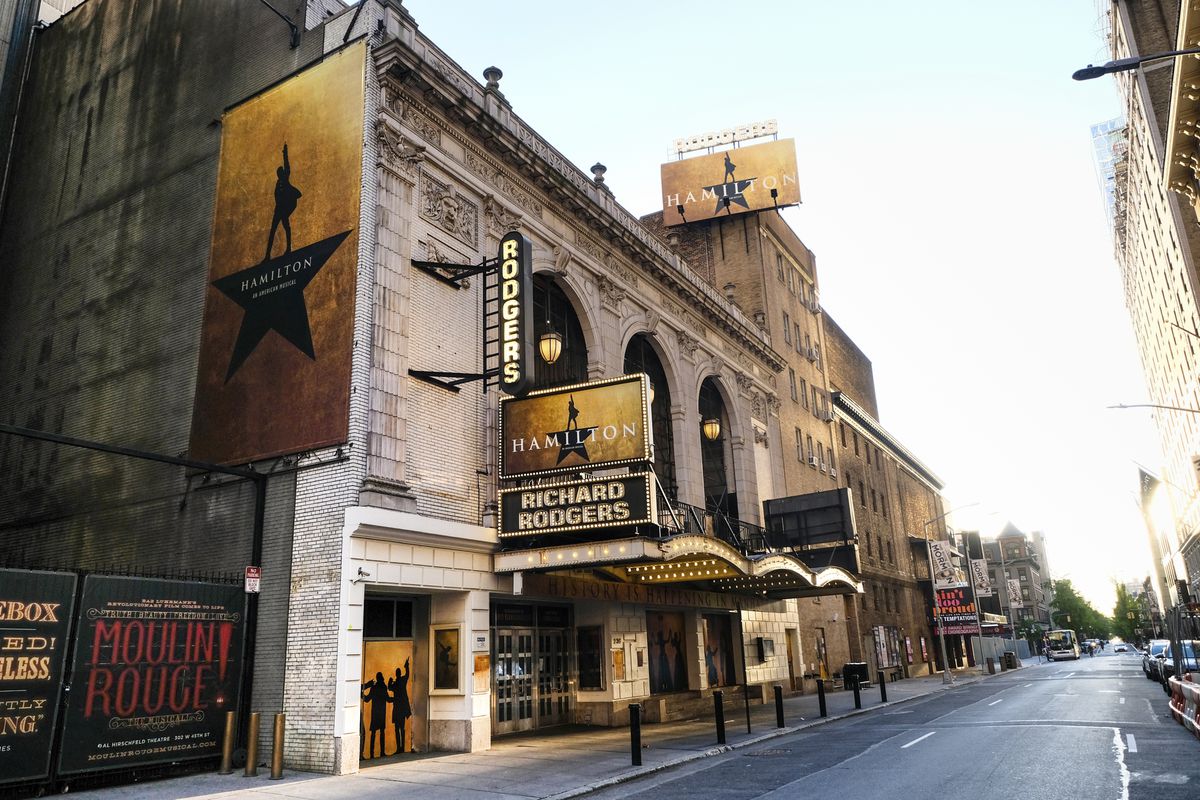 "Hamilton: An American Musical" at the Richard Rodgers Theatre is closed during Covid-19 lockdown, Wednesday, May 13, 2020, in New York. (Photo by Evan Agostini/Invision/AP)

"Hamilton: An American Musical" at the Richard Rodgers Theatre is closed during Covid-19 lockdown, Wednesday, May 13, 2020, in New York. (Photo by Evan Agostini/Invision/AP)

Elizabeth L. Wollman is professor of music at Baruch College, CUNY, a member of the doctoral faculty in the theatre department at the CUNY Graduate Center and the author of several books on the contemporary American stage musical.

More than 32 miles long, running north from the Battery all the way to Westchester County, N.Y., Broadway is perhaps most strongly associated with the 41 professional theaters of 500 seats or more concentrated in Manhattan’s storied Theater District. Run by one of the oldest, smallest entertainment industries in the country, Broadway has weathered film, television, the internet and more than a few global crises.

This is its biggest yet: The pandemic has silenced Times Square, where the marquees of empty theaters glitter strangely at silent side streets. At least there's streamed content to ease theatergoers' heartache, including "Hamilton," now playing at a living-room couch near you. While we await the return of live theater on and beyond Broadway, here are some misconceptions about the commercial theater district worth exploding.

Myth No. 1: Broadway is for old white people.

"Shocker: Old White People Love Broadway," read a 2011 headline in the magazine BlackBook. References to the "blue-haired crowd" have been stock descriptors in theater reviews for decades. The connection between Broadway and whiteness is so strong that one of its oldest nicknames, "The Great White Way" (dating to when a Midtown segment of Broadway became one of the first areas to be electrically lighted in the 1880s), has been repurposed in pointed commentary about how the industry and its entertainments are dominated by, and cater to, a narrow demographic.

A 2019 Broadway League survey shows that the average spectator is white, female and around 42 years old - hardly as diverse or young as fans of other kinds of mass entertainment, but certainly a ways away from senior citizen status. Audiences have gotten younger in recent decades - significantly so since the early 1970s, when the average age of attendees was 55. Audiences are also becoming more racially diverse as productions diversify: In the past decade, the Latino audience has grown by 61 percent, and the 2018-19 season saw a record high for nonwhite theatergoers.

Broadway is constantly accused of abandoning its storied, artistic past in a current embrace of filthy lucre. A 2004 Pittsburgh Post-Gazette article expressed surprise that Broadway hadn't been "entirely" taken over by "commercial entertainments and revivals." In 2018, a New York Post critic accused the industry of catering to spectacle-hungry tourists: "Broadway is looking more like Universal Studios than the epicenter of great theater these days."

Blaming the death of Broadway on money is a tradition; every generation announces that this time, Broadway really is dead. "Today, with the crazily escalating costs involved," one critic wrote in 1979, "... a producer feels it mandatory to play safe. ... At least in previous years we had men like Gershwin, Porter and the other heroes writing the music." Economic historian Alfred L. Bernheim observed a general attitude that Broadway had peaked because "commercially-minded men have wrested control from the artistically-minded" - in 1932.

Each season, Broadway offers a variety of entertainments, from staged versions of beloved films to less familiar, more innovative properties. And as new production models have ushered six thriving theaters owned by nonprofits into the district, who’s to say Broadway isn’t actually less commercial than it has been in days past?

Myth No. 3: It’s impossible to get affordable tickets to the hottest shows.

Before the pandemic shuttered all the theaters, New York travel guides, including Frommers and Moon, warned tourists that they would have to pay "top dollar" to snag "impossible" seats for hits including "Dear Evan Hansen" and "Hamilton." Complaints that tickets to the latter were "impossible" to score ran rampant in its first years on Broadway: New York Times critic Ben Brantley joked that audiences might need to "mortgage their houses and lease their children to acquire tickets."

Broadway tickets are certainly expensive: The average price in 2019 was $124. But with patience and planning, it was possible to get affordable tickets to even the hottest shows before March. On shows' official websites, visitors could register for alerts when new blocks of tickets were released; lower price points are set for seats in the mezzanine and balcony, or on the far sides of the orchestra. Box offices typically sold day-of-show tickets freed up by cancellations, or standing-room and student-rush tickets at lower prices.

Concerns about the "Disneyfication" of Broadway ran high through the 1990s, when New York reached a deal with the entertainment conglomerate to increase its presence in Times Square. Disney's move to Broadway was embraced by a city government long stymied as to how to preserve its storied Theater District while ridding it of adult bookstores, XXX theaters and petty crime. But plenty of residents worried about the death of productions not based on Disney cartoons and warned that Midtown Manhattan would become a sanitized urban theme park. "It's going to cut the life out," lamented New Yorker critic Brendan Gill of the redevelopment plans.

Now it’s clear that Disney’s presence has helped attract millions of tourists from all over the world. Once held up as the epitome of urban decline, Times Square now typically hosts some of the heaviest pedestrian traffic in the city, and when the city is fully functioning, tourists make up about 65 percent of Broadway ticket buyers. This reflects a complete reversal from the bad old ’70s, when locals filled the majority of seats.

While Disney has strongly influenced the trend toward jukebox musicals and expensive spectacles, it hasn't destroyed the industry by crowding out smaller, riskier productions. Independent producers and off-Broadway theaters continue to bring new shows to Broadway each season: For example, the Public Theater, hardly a huge corporation, created the Tony-winning musicals "Fun Home" in 2013 and "Hamilton" in 2015.

Myth No. 5: Shows close because they are bad.

Broadway's biggest hits typically enjoy full houses and lengthy, lucrative runs, while its biggest flops suffer through schadenfreude and speculation as to what went wrong. The answers almost always fall along aesthetic lines: Historians often blame the ugly costumes, unknown cast and confusing reverse chronological order for the demise of "Merrily We Roll Along" in 1981. Critics cited "King Kong's" convoluted plot, forgettable score and one-dimensional characters in explaining its failure in 2019.

According to Variety, a "hit" is any show that makes its initial investment back, while a "flop" is any show that fails to recoup (even if short by only a few dollars). That's a majority of them: Broadway is a notoriously risky business, and most productions that open each season don't make their initial investments back. Viewers, of course, use these terms to assess a show's look and sound, not its financial status. Historically, however, there has been a correlation between a show's popularity and whether it "flopped."

Those distinctions have become harder to make cleanly. Producers have learned to build up reserve funds, so these days, fewer shows close right after they get bad reviews. “Spider-Man: Turn Off the Dark,” “King Kong” and “Pretty Woman” received critical drubbings but closed months or even years later, once audiences lost interest and producers started to lose money. On the flip side, shows that fail to attract audiences on Broadway can take to the road for touring or student productions in hopes of recouping losses. Ultimately, a show’s success or failure has less to do with its artistic components and more to do with how long producers can keep it solvent while devising ways to help word-of-mouth work its magic.