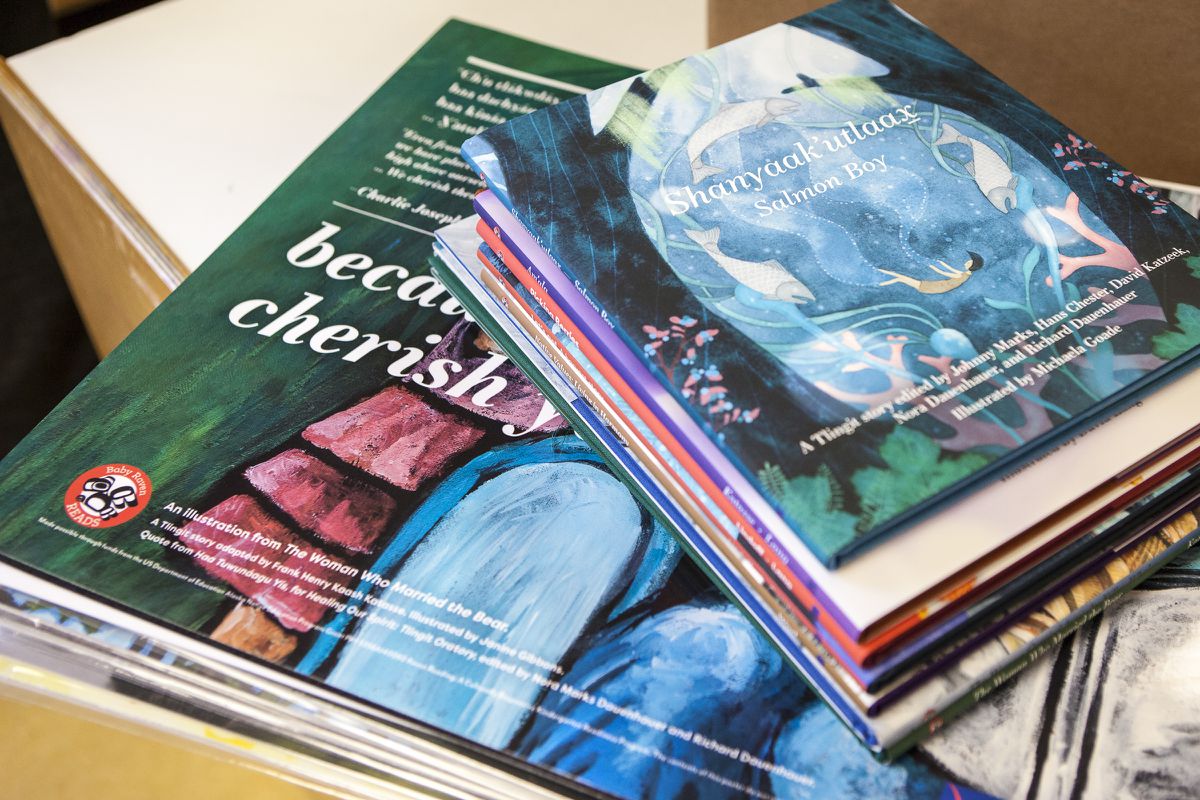 There are currently 19 titles in Sealaska Heritage’s Baby Raven Reads series, with nine more scheduled to be released by 2020. (Photo by Nobu Koch)

There are currently 19 titles in Sealaska Heritage’s Baby Raven Reads series, with nine more scheduled to be released by 2020. (Photo by Nobu Koch)

Baby Raven Reads is a program launched in 2014 by the Sealaska Heritage Institute to improve the academic performance of Tlingit, Haida, and Tsimshian students in Southeast Alaska. Part of the program involves publishing a series of books aimed at these children that highlight their culture while helping establish early reading skills. Written and illustrated by Southeast Alaskan writers and artists — most of them Alaska Native — the books include words from Native languages alongside the English text, an important addition for keeping these languages alive and vital.

The resulting series of board and beginning reading books has drawn national attention and a couple of awards, and deservedly so. While primarily targeted at young Alaska Native children, the books are delightful and offer a wonderful introduction to the ancient cultures that have dwelt along what is now the Alaskan Panhandle and Canadian coast for more than 10,000 years. These books are suitable for children anywhere and are a good vehicle for teaching all Alaska children about the first people who made their homes here.

At present, there are 18 books available from the Institute through its website, exploring a range of topics. Among the board books are "Baby Raven" and "Baby Eagle," which present the two moieties, or matrilineal descent groups, that Tlingit culture is divided into. Each book gives the names of several of the clans that the moieties are further organized by (Beaver, Otter and Sea Lion are among the Raven moiety subgroups, and Mountain Goat, Grizzly Bear and Porpoise are some of the Eagle clans). Black and white clan crests, in traditional Tlingit art style, are drawn by Crystal Worl and presented against a backdrop of somewhat blurry land- and seascape paintings by Nobu Koch that perfectly capture the damp temperate rainforest environment that the Tlingit have occupied for more than 10,000 years. Haida versions of these books are also available.

In "10 Sitka Herring," written by Pauline Duncan and illustrated by David Lang, children learn to count backwards from 10, and also discover the how the food chain works. The book opens with 10 herring swimming about, but one by one they are consumed by other sea creatures, including a salmon, a crab, an octopus and a shark. Some might consider this too macabre for small children, but it's the reality of life and there's no need to sugarcoat it. It's an unexpected twist on a board book standard.

Native legends drawn from oral histories are also found in this series, especially in the beginning reading books. "How Devil's Club Came to Be," written by Miranda Rose Kaagwéil Worl and drawn by Michaela Goade, is based on a traditional story. It opens with Raven worrying for his people because they are falling ill and their shaman has gone missing. Raven spies a giant kidnapping another shaman and sends his niece to defeat him. Raven's Niece encounters the Thunderbird people, whose leader helps her. The story tells of how devil's club resulted from the conflict, and despite its thorny reputation with Alaskans, serves to remind readers that the plant has had medicinal uses among the Tlingit for countless generations.

"Am'ala" is a Tsimshian coming-of-age tale dating back thousands of years. Adapted for young readers by Henry Frank Kaash Katasse and drawn by Lang, it's an enchanting story, told in verse, of a young man believed by his brothers to be lazy since he sleeps all day. Unbeknownst to them, however, he is training at night with a spirit who guides him to become the strongest man of all. Once he establishes himself as such, he discovers his true calling, which he accepts.

Subsistence has always been core to Natives throughout Alaska. In "Let's Go!, A Harvest Story," written by Hannah Lindoff and drawn by Goade, we follow children through a full year in Southeast, gathering plants and animals from the land and sea for food and other uses. A painting by Goade of children walking on the ice in the dark occupies two full pages and presents a magical scene readers — even adult ones — will wish they could enter into themselves.

Kids love berries, of course, and the sweet treats are a mainstay of the subsistence calendar. In "Picking Berries," written by Lindoff and drawn by Lang, children go harvest the treats that the land offers up. The book is primarily in English, with Native names for the berries sprinkled here and there. In the back one finds the words for five different berries in the languages of the Tlingit, Haida and Tsimshian. (And for parents unfamiliar with these languages, books and audio resources on spellings and pronunciations can be found on the same Sealaska Heritage Institute webpage as the Baby Raven Readers.)

This book is illustrated with lively photographs of Southeast Native Alaska life rather than artwork. It's a visually captivating volume that fulfills the goals of the program, which Worl outlined through an emailed statement: "With this series we are aiming to meet the demand for books that reflect the Native worldview, convey positive self identities to our children and give them the tools they need to succeed, while also bringing our culture to the public to build cross-cultural understanding."

On this final point the books succeed with honors. Having grown up at the southern edge of these cultures, I know from experience how intriguing they are to children.

Baby Raven Reads books can be purchased from sealaskaheritage.org and will make great gifts for young children everywhere. Proceeds from the sales go toward continuing and expanding the program.