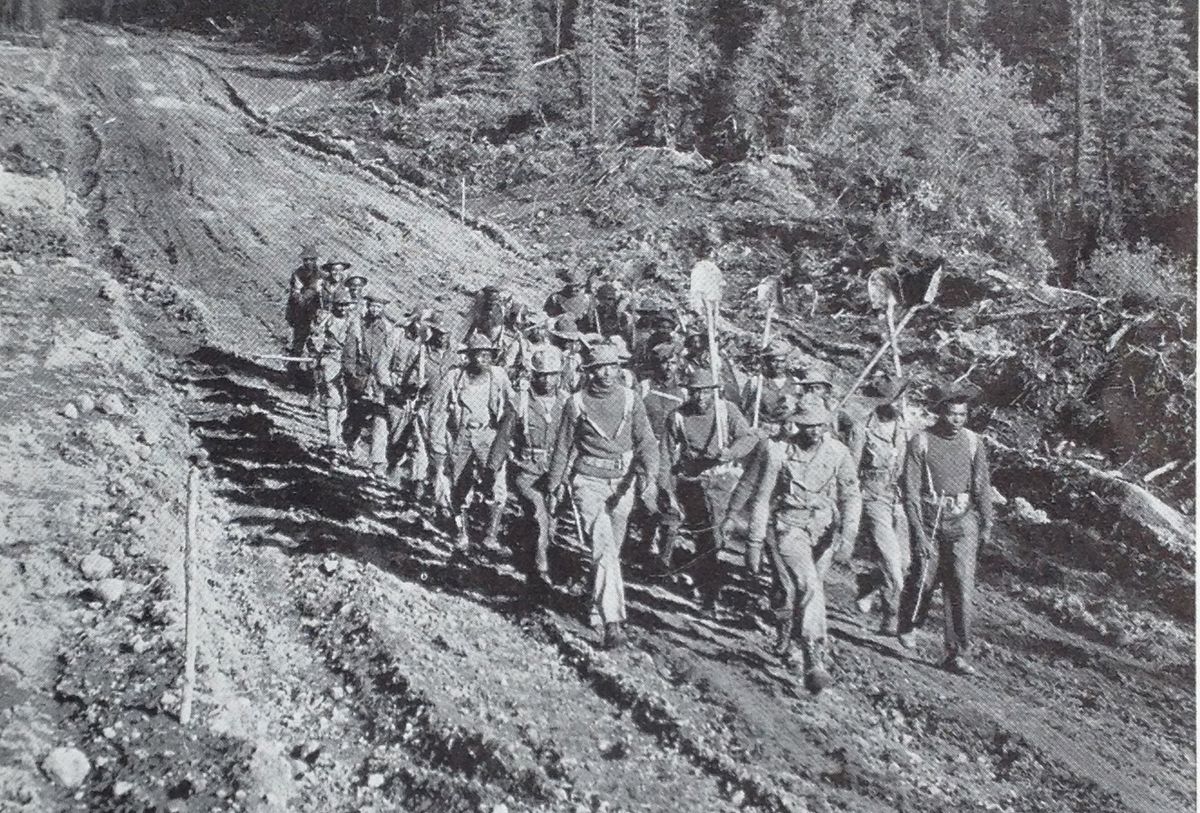 We Fought the Road

It's a bit of a clunky title, but it offers extremely belated recognition to a fact that was officially suppressed at the time and largely omitted from subsequent histories: Black soldiers from segregated regiments performed an enormous share of the labor building the road connecting Alaska to the Lower 48 in 1942. And they did this while enduring the racism then endemic in American culture. Even the military, which had yet to be desegregated, treated them as third class enlisted men at best. Yet despite this, as well as brutal cold that these men — many from warm Southern states — had never before endured, they worked excruciatingly hard and sometimes to death for a country that couldn't be bothered to thank them.

The husband and wife team of Christine and Dennis McClure have co-authored "We Fought the Road," a recent, multifaceted history of the highway's construction. The couples' interest in the topic was spurred after Christine's mother passed away in 2009. Among her papers. they found letters Christine's father, Turner "Tim" Timberlake," had written her mother before they were married, at a time when he was commanding the all-black 93rd Engineer Regiment that worked on parts of the Yukon Territory section of the road in Canada.

Christine had known her father commanded a black unit, but beyond that had little knowledge of what his experiences had been like and of the segregation that existed in the military at the time of the project. This sent the couple, who live in North Carolina, on a personal odyssey up the road to discover her father's past and the broader context it took place in.

This book is essentially three short, interwoven stories brought together into one narrative. On a general historical level, it's about the history of the road building itself. Even before the United States entered World War II, plans were afoot for a joint effort with Canada to build a land connection to what was then the territory of Alaska, and Canada had begun work on a staging route to Whitehorse, the capital of the Yukon.

The attack on Pearl Harbor turned a back-burner initiative into a pressing national security matter, and little more than three months later there were already American troops assembling in the North and preparing to punch a road through.

The second thread of the story covers the experiences of the 93rd regiment, sent to build a stretch in the Yukon. The authors explore how the men were trained in Louisiana, rushing through preparations while being subjected to the Jim Crow laws in the South. The Army considered them of subpar intelligence and fit only for the most menial of tasks. It's true that many of them lacked even high school diplomas, but no one in the upper echelons of the military at that time gave a thought to the horrid social conditions, hopeless economic prospects, and virulent racial oppression that led to this situation. Regardless, the men would show themselves capable of far more than the Army expected of them.

The third part involves the 93rd's commander, Timberlake. The product of a Southern upbringing, he likely took for granted the racial divide, although his daughter said she never knew him to be overtly racist. The authors include quite a few of his letters home to his then girlfriend and soon-to-be fiancee, Hellen May Brian. Curiously, to both the authors and readers, Timberlake simply never mentioned in his letters that the troops he led were black. It's a sign, perhaps, of how this division of white and black at the time was so matter-of-fact that it might not even have crossed Timberlake's mind that it was significant. Additionally, I suspect, that being a young man at the time and in love with a woman thousands of miles away, when he did write his mind was with her, not on the job.

What follows is a book that zigzags back and forth between Timberlake's "three cent love affair" with Hellen (three cents being the cost of a stamp), the travails of building the highway on permafrost and swamp (the route was punched through in a matter of months), and the continued mistreatment of black soldiers doing most of the hard work. Timberlake might not have mentioned this latter aspect, but his daughter wants history to remember.

The soldiers were shipped north, where many residents had never seen African Americans before. Both the military brass and the leaders of the communities they passed through wanted to isolate them from the locals. Midway through the book, the authors include some official military letters that are astonishingly racist by today's standards. It was bad enough that even some of the enlisted white men of the time were disgusted, writing letters home complaining that black troops were treated little better than slaves (when winter set in, black soldiers had to build housing facilities for whites before they could build their own; they were still sleeping in tents long after temperatures plunged below zero).

In spite of this, work carried on apace, and one of the most enjoyable aspects of this book is how the authors manage to evoke the frenzy of the road building with action-filled language: "Johnson's lead companies raced through the wilderness — but it fought back — hard."; "Building from two to four miles of new road a day, the companies were … a moving target … like gypsies, they moved their bivouac every two or three days." The McClures are first-time writers, but deliver vivid prose.

Ultimately though, the book's biggest contribution is matching what the state of Alaska did: lending recognition to the men who made modern Alaska possible. Most have passed on and will never know that their labors are finally receiving their deserved honor, but the moral arc of history is on their side.