Bears are coming for you, says humorist and ‘Bearmageddon’ expert 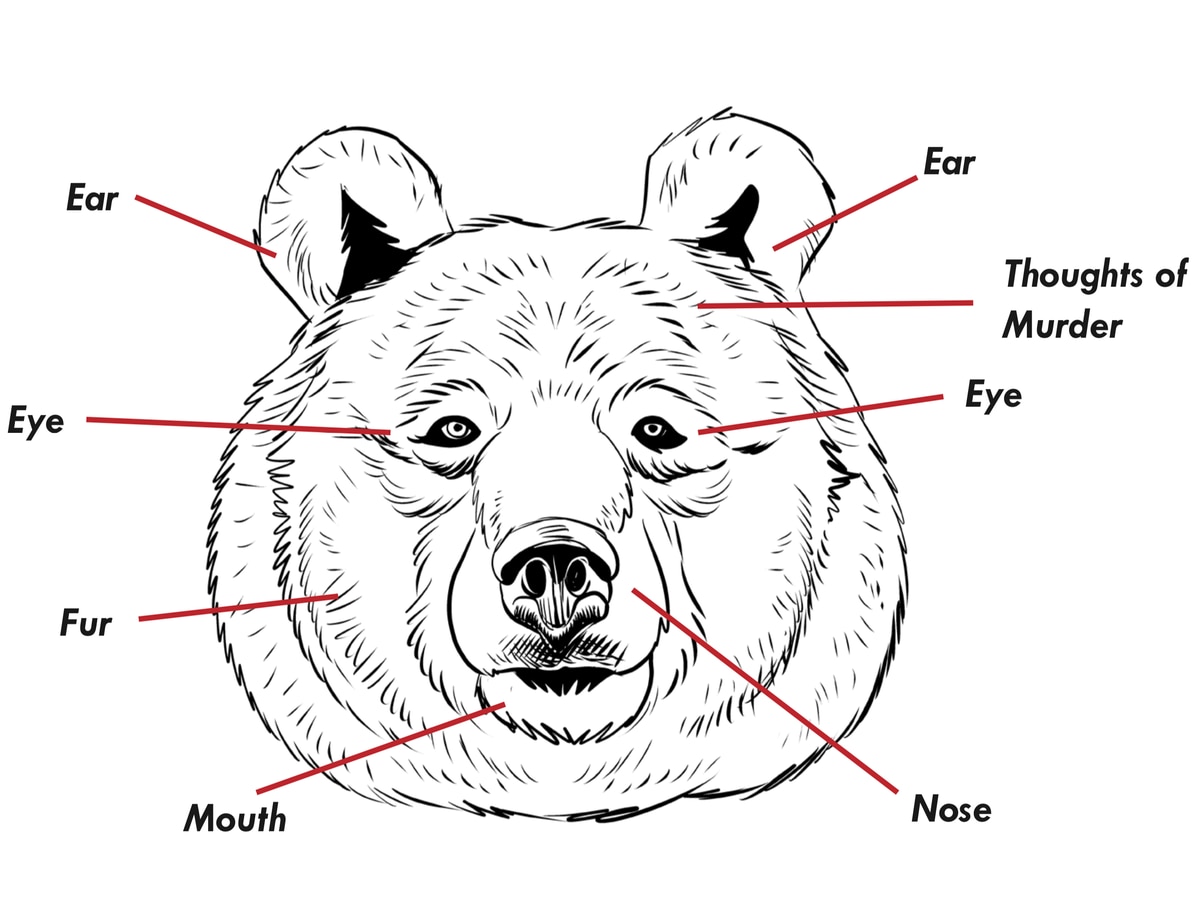 Illustration from "Bears Want to Kill You: The Authoritative Guide to Survival in the War Between Man and Bear," by Ethan Nicolle

Illustration from "Bears Want to Kill You: The Authoritative Guide to Survival in the War Between Man and Bear," by Ethan Nicolle

Bears Want to Kill You: The Authoritative Guide to Survival in the War Between Man and Bear

Nicolle is an artist and writer who has been kicking around the world of comics and animated television programming for well over a decade. His series “Chumble Spuzz” was an Eisner Award nominee in the humor category, and he’s written for “VeggieTales,” “Teen Titans Go!,” “Bunnicula” and “Yabba Dabba Dinosaurs!” His web comics include “Axe Cop” and, since 2011, the ongoing “Bearmageddon,” a satire of the horror and apocalypse genre that depicts a world overrun by bears bent on killing everyone in sight (think Chad and Darin Carpenter’s “Moose: The Movie” in overdrive, with an endlessly expanding population of bears taking the place of the psychotic moose and much a higher body count, but the same level of ridiculousness). He also writes for the satirical Babylon Bee website, and oversees his own deliberately fake news page, Bearmageddon News Network (BNN).

Nicolle’s latest publication, “Bears Want to Kill You,” is drawn from the same well as “Bearmageddon” but stands on its own and can be thoroughly enjoyed whether one has read the web comic or not. It starts from a basic premise: Every bear alive is evil, their collective plan is to wipe out humanity, they cannot be killed (in fact, if you blow them up, each little piece quickly becomes another marauding bear), and there’s nowhere to escape to. Not even outer space. Bears are out there too. And unlike us, they don’t need oxygen.

[What it’s like to bear spray yourself in the face]

Through text, cartoons, Photoshopped artwork, graphs and more, Nicolle spends 240 pages telling us how bears will be the death of us all, and how none of our efforts at fighting back will save us. And remarkably, for a book built on essentially one joke, he keeps it going the whole way through.

The book begins with an introduction to bears, their physical attributes (they inhale souls and exhale sarin gas), size (from microscopic to planetary), habitats (that bear you imagined seeing in the clouds was in fact a real bear and you better run), and diet (yes, that would include us).

Then Nicolle gets into the gist of his book. Those bears don't just want to kill you, they will inevitably kill you, and they'll do so by employing no end of violent tactics (some of them, especially the piledriver, familiar to professional wrestling fans). They also excel at martial arts. Another favorite trick of our ursine enemies is to drop from the sky and smash their prey, a maneuver so effective that even koala bears (who aren't actually even bears, Nicolle reminds us) have gotten in on the act.

Nicolle’s cartoon renderings of stick figures being dismembered, disemboweled and decapitated really shouldn’t be funny. But they are. And it gets even more absurd as bears smash their human prey into the Great Pyramid, roll it over Sioux Falls, or use it as a surfboard. And when all else fails, bears attack their targets on social media. There truly is no safe space.

Surviving a bear attack, according to Nicolle, is simply not an option. So your only hope is to attempt some brave retaliation that will keep you from looking like too much of a fool while going down. And forget deploying bear spray. It's useless and possibly made of essential oils.

Some of the jokes are gimmes. We all know that if you want to survive hiking in bear country, the first rule is to go with someone who can’t run as fast as you can. And he takes swipes at other easy targets, like millennials, kale and Taco Bell. But he does so cleverly, working them into his broader narrative. And most of the ideas spinning out of his head are entirely his own. Like this one, for instance:

“On occasions when a bear is feeling particularly vicious, the relentless animal will go to Asia and capture an elephant, then drag it to Mexico, hollow it out, then turn it into a pinata full of screaming human beings. It will then beat it to pieces with a board.”

If it all sounds completely over the top, it is, and that’s the point. Nicolle has tapped into one our most primal fears — becoming another animal’s nutrition source, thereby getting knocked off the top of the food chain — and taken it to the hilt. And for Alaskans and others who live and travel in places where bears are present, it’s some much needed levity regarding what we know can be a potentially deadly situation (rare is the summer in Alaska without at least one fatal mauling, but who among those of us who head out into the wilds hasn’t cracked at least one joke about being attacked and consumed; humor is one of humanity’s best defense mechanisms against reality).

Yet there's also restraint. As a humorist in a time when comedy can be overly graphic or far too political, Nicolle shows how these tools can be used in limited doses to good effect.

The blood is comical but never grotesque. There are a handful of scatological jokes, but they’re tossed in at unexpected moments and Nicolle doesn’t use them as an easy fallback. Meanwhile, the very few political cracks are spread across the spectrum, targeting vegan hipsters and conspiracy-minded old men, liberals and conservatives alike. This is how political humor is supposed to work. When everyone is a target, everyone can (hopefully) laugh.

If bookstore humor shelves were further subdivided, “Bears Want to Kill You” would be at the top of the Dad Jokes section. It’s that corny. And with Father’s Day looming, it’s a far more bearable gift than a necktie, which a bear would just exploit as yet another weapon anyway.