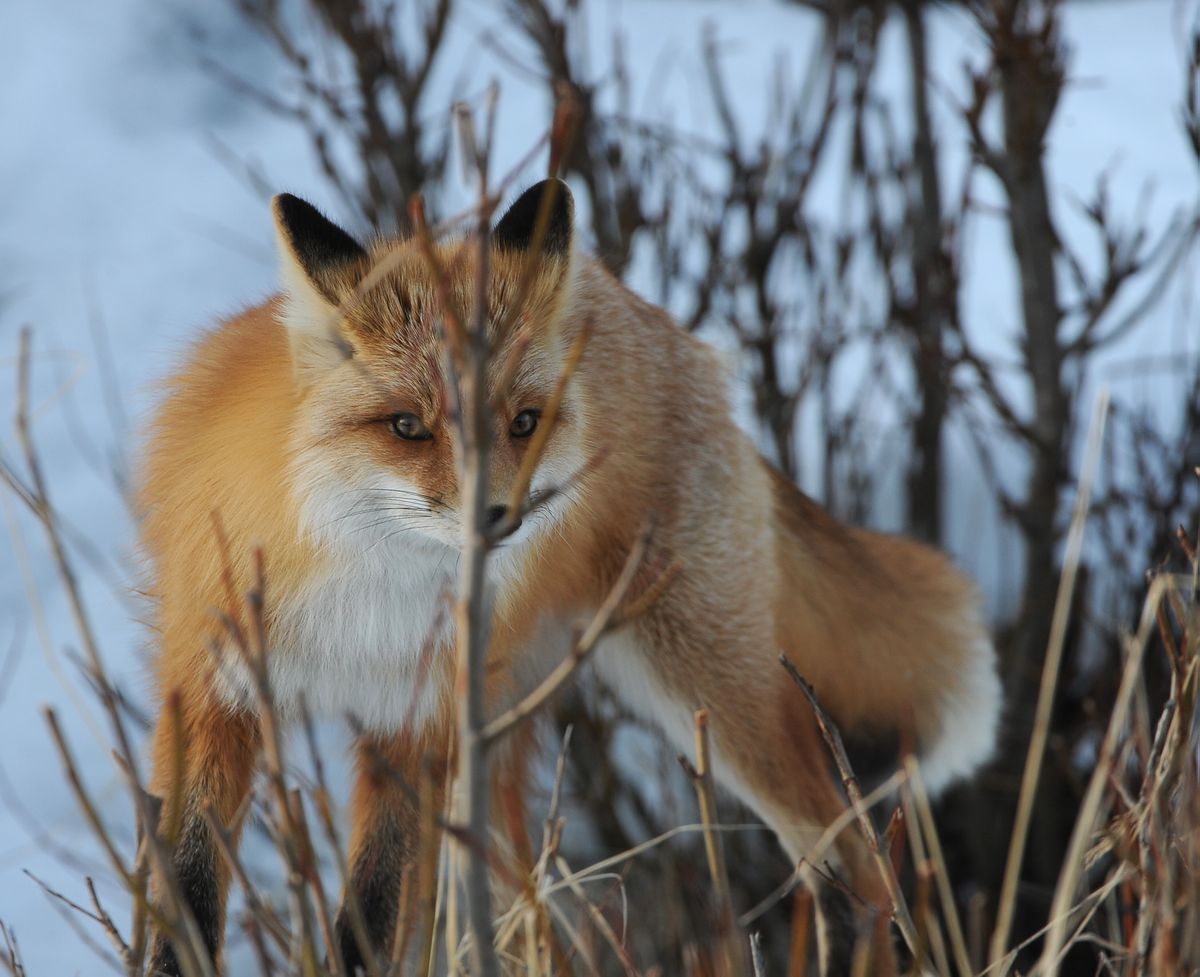 A fox comes out of the brush along the edge of a creek in South Anchorage on March 29, 2018. (Bob Hallinen / ADN archive)

A fox comes out of the brush along the edge of a creek in South Anchorage on March 29, 2018. (Bob Hallinen / ADN archive)

The Hidden World of the Fox

On my first bus ride into Denali National Park and Preserve, less than a week after arriving in Alaska in 1990, I was fortunate enough to see most of the mountain and many of the large animals inhabiting the road corridor. But the memory that stands out 30 years later isn’t my first grizzly bears or a moose or caribou. It was a fox that had captured an arctic ground squirrel. Tilting its head upward, the fox gobbled the frantic critter right alongside the bus, doing away with it in seconds.

It was a lesson on the realities of how nature doesn’t bend to human wishes. Foxes are, by our standards, easily the cutest creatures to be spotted in the park, but they couldn’t care less. They might remind many onlookers of their pet dogs back home, but foxes are wild animals, part of the web of nature, and killing to live is what they do. If this was disturbing to some of the bus passengers — and it was — it was because most dwelt in a modern, urbanized world where nature has been largely shunted aside.

Except sometimes, as is the case with foxes, this is not necessarily so. Like badgers, raccoons, possums and a few other creatures, foxes have thrived in urban environments, resiliently holding their own against pavement. Remarkably intelligent and highly adaptable, foxes patrol city streets from Chicago to London to Tokyo and well beyond, foraging from garbage, human handouts, resident rodent populations and more — including, every now and again, someone’s pet rabbit or cat.

[Behind the lens: An evening with foxes in South Anchorage]

British mammal ecologist Adele Brand has lived among foxes her entire life, and has made them the focus of much of her professional career. In “The Hidden World of the Fox” she introduces us to the natural history and life cycles of an animal many would like to adopt and take home. But, she warns us, this would not be a smart move. They might wander through an open door and right into your home, but you won’t be able to train a fox to be a good house guest.

Brand explores fox diets, reproductive patterns, vocalizations, social interactions, involvement with other animals, and much more in a light and friendly tone that reflects love for these animals borne of decades spent enjoying their presence. She has a well-grounded realism inflected with a sly sense of humor that keeps the book rolling along merrily (among the memorable anecdotes is the story of a footwear-stealing fox that nabbed more than 250 shoes from homes around a village in Germany, earning herself the name Imelda from locals, who took it in good fun).

Foxes, of course, are canids, members of the dog family. Brand explains that the earliest ancestors of foxes emerged from what was then dense jungle in modern-day Texas during the Eocene. As the planet cooled in subsequent millennia, these canids expanded their range, evolving into foxes and eventually reaching every continent excepting Antarctica. The red fox, the most widespread of all fox species, appears to have originated in what is now Hungary about 3.4 million years ago.

Omnivorous and capable of living either solitarily or in groups, foxes are a wildly successful animal by evolutionary standards. Equipped with an ability to thrive under nearly all conditions, foxes thus found their way to the far side of Asia, across the Bering Land Bridge, and from there down through the Americas. Long before homo sapiens had escaped their cradle, foxes had discovered the New World.

As people spread across the globe, foxes appeared wherever they went, and the animals found their way into nearly every known mythological canon. Their cuddly appearance and craftiness as hunters made them favorites for children, leading to appearances in folk tales across the globe. Humans have been watching foxes for many thousands of years. And foxes have often returned the gaze.

Much this book is concerned with the relationship between humans and these animals, and Brand very wisely navigates the narrow passage between the fear that some people hold toward foxes and the distorted anthropomorphizing that others engage in. While foxes, by and large, aren’t endangered at present, Brand wants what’s best for them, and this is not always what people want.

Brand assures readers that foxes rarely attack humans unprovoked. But the key word is rarely. It has happened now and again, including a 2010 incident in London when a fox wandered into an open home and mauled sleeping twin infants. The event prompted fury from both those who wish to see the animals exterminated from the city (a virtual impossibility) and others who mercilessly heaped abuse on the parents via social media.

Neither response was productive, Brand determines, reiterating a point she had made several pages earlier: “we need to consider animal behaviour in a more realistic and dispassionate way. Neither the politician raging that foxes are bloodthirsty vermin nor the animal rights activist protesting that they never cause any trouble helps anyone.”

These are wise words regarding most any human-wildlife conflict, but for Brand the idea reflects her belief that by quietly observing foxes without interfering with them, urbanites are provided an opportunity to learn about nature as it romps across their backyards. Respect is the critical element.

With that in mind, she offers tips on fox watching, something she has done not only in England, but in further flung locales such as British Columbia and Gujarat, India. She encourages readers to pay attention to these animals that can be found nearly anywhere.

Here in Alaska, foxes seem to get overlooked among the charismatic megafauna that tourists come to see. They exist almost as an afterthought, yet are frequently spotted if one pays attention. I see a few bears every summer, but enjoy fox sightings year round. They’re the critters that are practically under our feet while we’re looking for larger animals. Brand’s book is reminder that watching them can be endlessly rewarding.