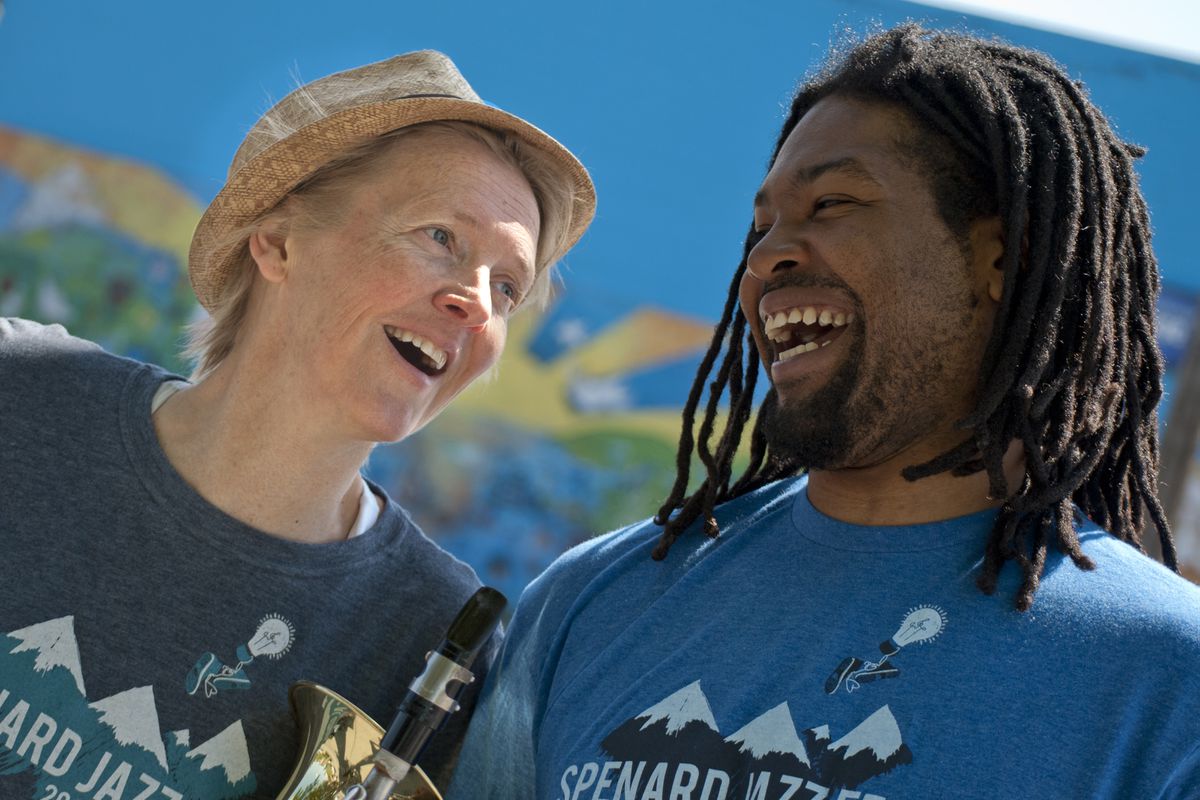 Nearly a decade ago, eight local musicians huddled around a table in Spenard's Organic Oasis following a gig, commiserating about the local jazz scene over fruit smoothies.

Yngvil Vatn Guttu had spent the preceding winter playing trumpet with some of Anchorage's best and was starting to realize the extent of the talent level for both players and composers.

But the group was unanimous in the opinion that there was a dearth of opportunity — and venues to showcase their skills.

The eight of them believed they could easily put together an hour apiece of original music. So at that table, the musicians hatched a plan to create the Spenard Jazz Fest.

"We had a very successful one-day thing," said Vatn Guttu, the festival's director. "It was packed inside. We sold 230 tickets at Organic Oasis, that's like two-and-a-half times capacity. Musicians were coming out of the woodwork and more and more people wanted to be a part of it."

Now in its 10th year, the festival has expanded from a one-day, eight-hour exhibition of original local music into a 17-day celebration of local artists with national guests and headliners.

Despite being a decade old, Spenard Jazz Fest has flown under the radar of many local music fans, rumbling just beneath the surface like a Charles Mingus bass line. Along the way it's developed some intriguing quirks and eccentricities. So on its 10th year, here are 10 cool things about the 2017 Spenard Jazz Fest.

It's hard to argue that there's anything that can't be adopted as an Alaska endeavor if it involves a good hike. Jazz Fest's annual jaunt up Flattop Mountain definitely fits the bill. The festival has established the musical hike as one of its signature events with plans for more extensive outings in the future.

This year's hike features the music of Lenny Pickett and Borneo Horns. Vatn Guttu said they are shooting to reach the top, but it may depend on the lungs of the musicians. Pickett is well known for his treks into the altissimo register, the highest played on woodwind instruments.

"Lenny is an altissimo player, so we'll see if he can climb as high as he plays," Vatn Guttu said.

The average marathon runner can finish a race in between four and five hours. Completing the Jazz Fest Music Marathon may be an even more impressive show of endurance. With 14 hours of music, the event features saxophone player Lenny Pickett, musical director of the "Saturday Night Live" band.

Pickett is the festival's artist-in-residence this year. Perhaps best known as the leader of the horn section in Tower of Power, Pickett is also an accomplished composer and for more than 20 years has served as musical director for "Saturday Night Live."

Vatn Guttu called Pickett a personal idol, and said she is excited to see how the local musicians mesh with him.

"I brought him up so the professional musicians in Anchorage could play with him," she said. "He is so accessible and it's such a learning experience. He's had an incredible career for 45 years and has been on top of the game as a recording artist."

Aside from the musical guidance for "SNL," he's also been involved in delivering some laughs. In a Bill Clinton-era sketch, Will Ferrell, playing prosecutor Ken Starr, subpoenas Pickett in the middle of a sax solo.

This year the Jazz Fest is collaborating with the Anchorage International Film Festival to show the 1928 Buster Keaton silent film "Steamboat Bill, Jr." at Bear Tooth Theatrepub. An original score will be performed by the Seattle-based duo of Miles and Karina. According to the Bear Tooth website, the performance will include accordion, guitar, banjo, viola, ukulele, kazoos and glockenspiel.

5. Jazz on the People Mover

In typical jazz style, Spenard Jazz Fest has specialized in improvisation, especially when it comes to venues. If you're not feeling up for the Flattop hike, you can hop on the city bus. Vatn Guttu said People Mover will have a bus parked outside Spenard's Church of Love on May 27 and June 3.

"On the days in between those Saturdays, People Mover passengers can expect live musicians hopping on their bus and playing," Vatn Guttu said.

Vatn Guttu said jazz musicians have long struggled finding venues that work. So in the do-it-yourself spirit that has seized indie music, the festival has recently put an emphasis on house concerts. The fest's calendar features no less than 10 house concerts.

"It used to be embarrassing to do a house concert 10 years ago," Vatn Guttu said. "Now it's the coolest thing on earth."

7. The kids are all right

Jazz of the Midnight Sun appears to be more like a punk band than a jazz band by the looks of the members' photos on the festival site. But the players, sprouted under the tutelage of local musician John Damberg, definitely have jazz chops, Vatn Guttu said.

"The one thing about jazz musicians that irks you, is they can actually play their instruments," she joked.

Harmonica may be viewed chiefly as a blues instrument, or maybe played in Germanic or folk music or featured in jug bands. But Tom Stryker has taken the harmonica into some unexpected genres. Playing with symphonies and jazz combos, Stryker has also had great international success, performing throughout Europe and Asia.

"The Chinese are really serious about harmonica, Asia in general. He's been the president of the (Society for the Preservation and Advancement of the Harmonica) and is an advocate," said Vatn Guttu of the visiting artist. "He's also been a role model."

Even within the local jazz community, there are big names who have nourished and invigorated the scene for years if not decades. Often those players, like Damberg, Dan McElrath or Melissa "Jazzmom" Fischer head groups or bands. But Vatn Guttu said some of the auxiliary players in the local bands are among the best talents.

She pointed to two percussionists as prime examples. Cameron Cartland is the rhythm backbone of Damberg's Latin Jazz Quartet. Trained at the prestigious Berklee College of Music, Cartland also plays with tribal funk group Pamyua.
Brandon Cockburn is a New Orleans transplant who has played with Rick Zelinsky and Fischer as well as others.

Pianist Rob Cohen is well known, but the Juneau resident may not be often heard by Anchorage audiences.

10. A trip down memory lane

In its 10th year, the festival is taking an opportunity to look back — or perhaps clean house.

Vatn Guttu said she is putting together a retrospective of the Jazz Fest, complete with photos and promotional materials that she will curate from a "carefully sorted" plastic bag. As much as anything, the exercise might provide a roadmap for the next 10 years of the festival.

"It's like an accordion," she said. "Sometimes it expands a lot one year and we pull it in. What I really like doing is emphasize what's happening right now. I'm trying to be fairly current. If we can respond to ideas and initiatives and incorporate them, we'll do it right away. We want to be open."