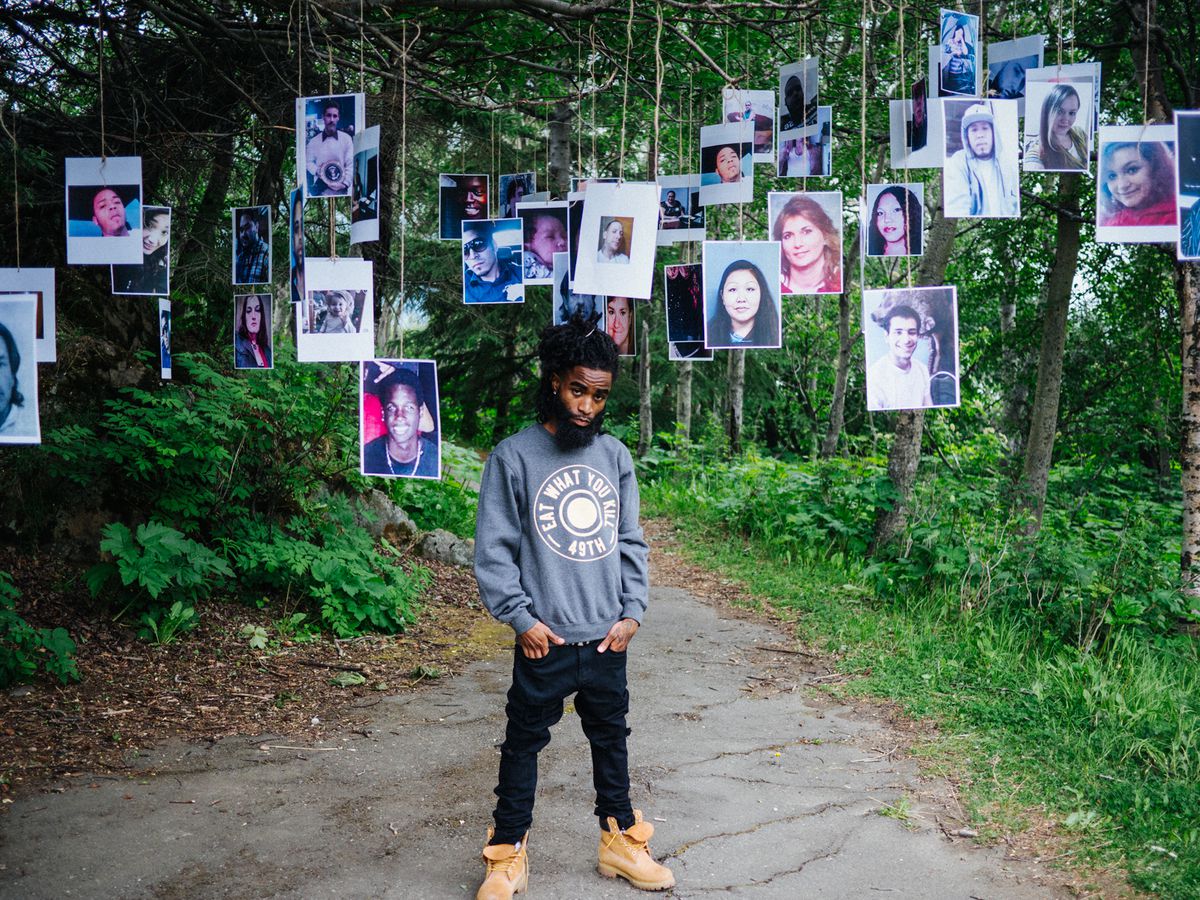 Anchorage hip-hop artist Tayy Tarantino surrounded by photos of Anchorage homicide victims, whom he pays tribute to on his new album, “To Live and Die in AK.” (Photo by Bad Agenda)

Anchorage hip-hop artist Tayy Tarantino surrounded by photos of Anchorage homicide victims, whom he pays tribute to on his new album, “To Live and Die in AK.” (Photo by Bad Agenda)

Tayy Tarantino has carved a career out of being ahead of his time.

"When I started rapping, I was already singing, had cadences, different pockets, and I built songs on that," he explained. "No one was doing that. It wasn't cool. It wasn't relevant. But I stayed in that lane."

As a teenager, that lane led to Sullivan Arena and an opening slot for Ludacris in 2009, who was among the world's biggest music acts. Artists grind a lifetime for an opportunity like that; Tarantino was there to take it.

"That was my first real big thing," he said. "I thrive under pressure, so I went out there and did what I had to do. People saw me, and they remembered me. After that, boom."

Today, the wiry 5-foot-4, 26-year-old performer in skinny jeans is Alaska's biggest hip-hop artist and still refuses to be overlooked. Since his Luda liftoff, he's dropped numerous albums and videos, is an annual favorite for Alaska Hip-Hop and R&B Music Awards, and the first artist promoters call when they need an opener for heavy hitters like Nas, Wu-Tang Clan, Nelly and 2 Chainz.

Some believe he's also on the verge of a national breakout with the Aug. 11 release of his new album, "To Live and Die in AK."

"It's his time right now – whether he wants to sign with a major or do the independent thing, it's gonna happen for him," said Reggie Ward, DJ, producer and host of the long-running Friday Night Mix radio show on KNBA, as well as Alaska's foremost hip-hop historian.

"His music, as a whole, appeals to a wide audience," Ward added. "But for him, and the reason why I know he's gonna make it, he's unique with his delivery and what he raps about. He's really, really versatile with his pen game."

The trademark of Tarantino's writing, singing and rapping remains resourcefulness and variety, which shine on "To Live and Die in AK." It moves from the club ("Shake") to the cypher ("All My Heart" featuring local legend Josh Boots), from a smoky dance-hall singalong ("Blaze Up") to an R-rated bedroom ballad ("Wrong"), and features fan favorite "On Go."

"I wanted to do everything possible I can do with my voice," Tarantino said, "and hit them with a whole lot of vibes."

The heaviest vibe arrives on the title track, an Alaska-laced remake of 2Pac's legendary love letter. This isn't a lazy layup to get heads nodding or a tug at hip-hop heartstrings. Like the original, it's an honest and bittersweet community commentary. For 2Pac, LA. For Tarantino, AK and Anchorage.

It's where Tarantino grew up singing with family at New Hope Baptist Church. Where his parents accompanied him into The Office Lounge so he could perform in front of no-nonsense grownups. Where he played at the Mountain View Boys & Girls Club and graduated from Service High. Where his friends thrive in marketing, art and fashion.

He adds that it's also where drugs and alcohol destroy lives. Where families struggle with poverty and PFD uncertainty. Where crime is a constant conversation. Where escalating murder rates are more than statistics.

"Record homicides back-to-back years in Anchorage and no one was talking about it," he said. "I wanted to wake people up and touch on the things going on in the city. … I feel it's important, you have a voice. You can have fun (making music) but don't be numb to what's going on. … It's still wild out here."

Ward added, "He's very conscious about his environment. He loves Alaska. … Every year that I've known him to be an artist, he's grown musically. A few years ago, he never would have made a track like that. But he continues to grow, continues to evolve. I'm really happy for him and really proud of him."

While Tarantino's music stands out, his intangibles could push him over the top. He's restless and relentless, hungry and hardworking.

His album was available for presale on iTunes, Google Play and Amazon a month early. As his Bad Agenda label team planned an Anchorage release party and strengthened his presence on social media and music-hosting sites, Tarantino was going old school. He worked the East Coast, circulating the record with radio hosts, fellow artists and industry connections. Back home, he delivers music to DJs and performs live at every opportunity, including those opening gigs for rap legends.

At each show, more people are arriving early to see him, rap along and sing his choruses. No crew necessary – he typically takes the stage with just his DJ, BeeOne, and lets his energy fill the space.

"They don't want to just hear your music; they can do that in the car or on a mobile device," he said. "You need to go on stage and touch them. That's your one chance to make an impression. New fans, old fans – I give them something to remember every time."

One moment he'll never forget: unveiling "To Live and Die in AK" in front of thousands as the last song in his opening set for 2 Chainz in January 2017.

"On stage at the Sullivan, under the bright lights," he said. "I gave a little speech. The homicide record. Trump just got elected. People were getting their cars stolen. They knew what I was talking about. I said, 'This one is for the town. If you're trying to make a change, put your lighter or your phone up.'"

As the familiar beat kicked and Dawn McClain sang her twist on the chorus, Tarantino held up an Alaska flag, eight stars of gold on a field of blue, while flashes of white and yellow lit up the dark stadium.

"It felt like the whole city was in there," he said.

Free admission, 21 and over

Josh Niva is an Anchorage freelance writer. He's a former reporter and editor for the Anchorage Daily News.