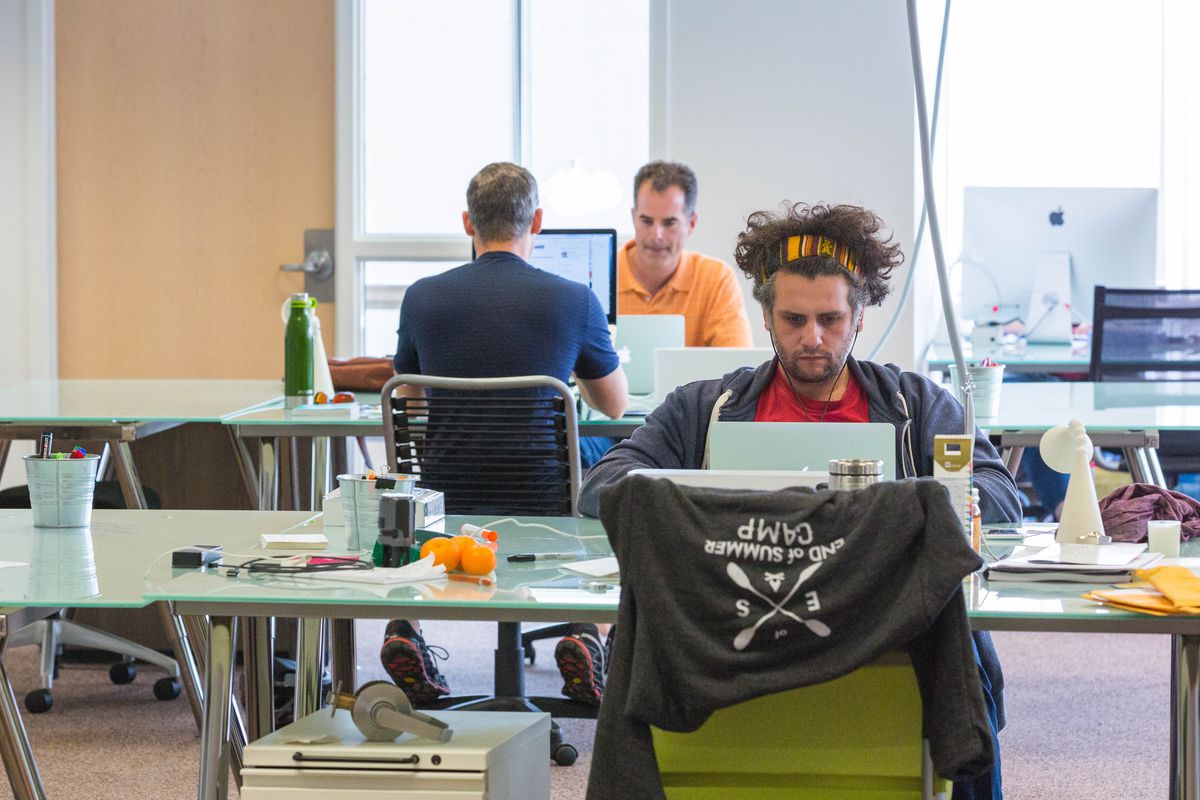 Jak Akdemir, a software engineer working for Tumblr, types away at the Boardroom, a coworking space in Anchorage on Thursday, July 28, 2016. Akdemir has been traveling for six months, and was working in Turkey before coming to Alaska. (Loren Holmes / Alaska Dispatch News)

Jak Akdemir, a software engineer working for Tumblr, types away at the Boardroom, a coworking space in Anchorage on Thursday, July 28, 2016. Akdemir has been traveling for six months, and was working in Turkey before coming to Alaska. (Loren Holmes / Alaska Dispatch News)

Paxson Woelber graduated from college in early 2008, at the worst time in recent memory to try to enter the workforce.

In September of that year, Woelber moved to New York City to look for a job at an advertising agency. But with the country in the throes of the recession, he said, "it was impossible to get good work starting out."

So Woelber, born and raised in Anchorage, started to do freelance jobs. It worked in his favor, he said.

"A lot of companies still needed work but couldn't afford agency rates," he said. "It was actually a good time for someone like me — I could undercut agencies' rates."

Woelber, 32, is now back in Anchorage and is self-employed full time, doing graphic and web design, branding, corporate art and other work. He's one of the people who make up Alaska's freelance workforce. A new first-of-its-kind study from the Alaska Department of Commerce, Community and Economic Development along with the Anchorage Economic Development Corp. has shed some light on what the rest of that workforce looks like.

The survey — which 191 people completed — questioned freelancers living and working in Anchorage, the Matanuska Valley, Fairbanks, Juneau, Ketchikan, Kenai and Sitka about education, work and life balance, health care, their confidence in the future economy and more.

The freelance or "creative class" segment of Alaska's economy has several key differences in contrast to the rest of the country, the results show. Many freelancers in Alaska are older than 55. They are also predominantly female and are more likely to have completed post-secondary education.

There are different types of freelancers — for example, some people freelance full time and others supplement traditional work with freelancing — and the study didn't distinguish between those.

Across the United States, the majority of freelancers are men under 40 who usually have a high school diploma or less education, according to the report.

In Anchorage, you can find these workers doing business at coffee shops like Black Cup or SteamDot, or at coworking space The Boardroom downtown, setting up with a laptop and bringing the office with them wherever they go. They serve a wide range of sectors, from retail to real estate to health care, the survey found, with the biggest concentration in arts- and science-based industries.

Nationally, 53 million people are freelancers, according to the report. The researchers weren't able to nail down a specific number or size of this independent workforce in Alaska because it's a figure that's difficult to track.

More than 60 percent of freelancers currently in Alaska are transplants from elsewhere in the United States, according to the report, and that gives the state and AEDC hope that Alaska can attract more people to the state's outdoorsy lifestyle and a market with less competition.

"There's no reason why this can't be an exportable commodity," said Jon Bittner, vice president of AEDC.

AEDC is working on a strategy to try to attract freelance workers from places in the Pacific Northwest, perhaps using low-cost campaigns through social media.

Gretchen Fauske, business development officer at the state commerce department, said Alaska isn't going to invest in a large-scale attraction campaign right now, not with the state's economy struggling with job losses in some sectors and a massive state budget deficit — but the department is discussing ways to support this piece of the economy.

"This isn't going to solve our problems," she said, "but it's one way of diversifying our workforce."

Jenna Schnuer, 45, is a freelance writer who moved to Alaska simply because she wanted to live in Alaska. (As she puts it, she "fell in love with the stupid place" after visiting in the early 2000s, and loves the outdoors.) A self-described "Anchorage-based New Yorker," she road-tripped here from the East Coast in 2013, using campgrounds along the way as her on-the-road office.

Part of the professional appeal stems from coming to a state with a less bustling creative class than, say, New York City.

"I don't want to say there's less competition … but it does help you stand out a little bit more when you're not a New York or San Francisco writer," she said. "And if I want to go hiking, I can work at night instead."

While being able to make one's own schedule and head to the mountains in the middle of the day might be appealing, there are also cons to the freelance hustle in Alaska. Fast and reliable internet access can be an issue, depending on location. Schnuer said that there's also "not the same energy" around being self-employed as there is in some larger cities.

For some, the cost of health care is also a challenge. Schnuer dealt with that first hand when she was diagnosed with breast cancer at 43, about a year after moving here.

"The monthly premiums here are ridiculous," she said, adding that she pays about $918 per month for her coverage, "and that's before the bills."

She's been clear of cancer since finishing treatment in April 2015.

About 90 percent of freelancers in Alaska indicated in the survey that they have some sort of health benefits, many through a spouse or retirement from working for the state, and from private insurance. That's also a big difference compared with the rest of the country, where a main concern for such workers is lack of health coverage, the survey said.

Woelber also cited the cost of health care as a challenge, and said that while working in Alaska might give someone a chance to move up the ranks quickly and "get incredible clients," he's noticed that cities like Portland, Oregon, and Seattle can attract creative people out of Alaska.

"In a place like Alaska, you're going to miss out on some of the really aggressive, high-end ambitious creative community," he said. "It creates an oversupply there and creates a vacuum in places like Anchorage."

Freelancers who do live here are pretty optimistic about the future. The survey found that most freelancers expect their opportunities to grow or remain stable in the next year. Financing, transportation and physical facilities were some of the biggest barriers facing the state's creative class.

Jim Lottsfeldt is the principal of an Anchorage lobbying and advertising agency, Lottsfeldt Strategies, which does its work mostly with freelancers. He said that the freelancer mindset in Alaska might be one barrier for workers to overcome.

"You get this idea, because of the scale of our market, that we're not as adept as some others," he said. "We've got it figured out way better than a lot of people. … We just need to realize, in the global marketplace, we can compete."