Are newspapers dead? Startups in Girdwood and Eagle River don't think so. 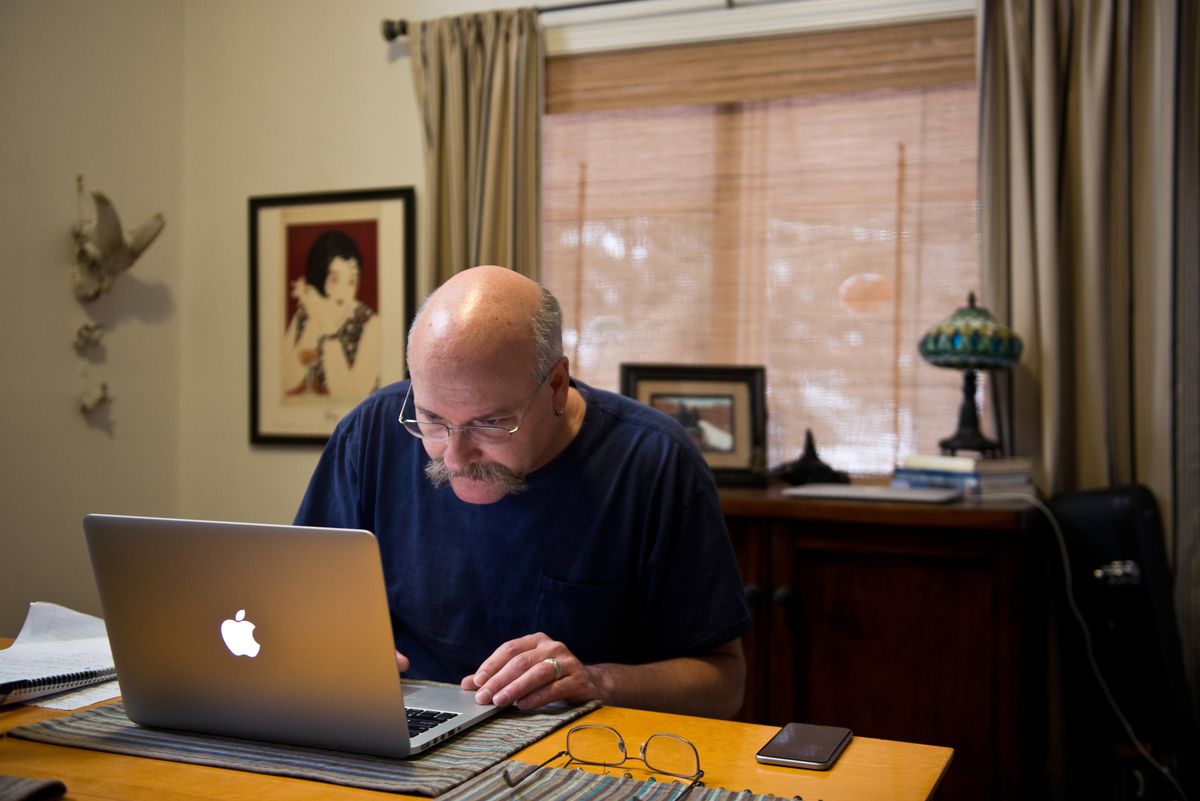 Late in 2015, Marc Donadieu was laid off from his job as an adjunct writing instructor at the University of Alaska Anchorage. Worried about supporting himself and his wife, he chose an unorthodox and somewhat risky means of making a living: starting a newspaper.

The new publication, the Glacier City Gazette, would be going head-to-head with the legacy paper for scoops and advertising dollars in the ski hamlet of Girdwood and nearby communities. A small market, it was the domain of Donadieu's former employer, the Turnagain Times. But he persisted, doggedly building his own relationships with sources and local businesses. Nearly a year after publishing the Gazette's first issue, Donadieu considers newspaper ownership the best job he's ever had.

Newspaper rivalries were once part of the fabric of cities across America, including Anchorage. But between 2004 and 2014, more than a hundred papers folded or were absorbed by former foes, turning even major cities, like Seattle, into one-newspaper towns.

Such daunting national statistics aren't deterring news entrepreneurs in the state's population hub of Southcentral Alaska. This fall, another weekly paper, the Eagle River Chugiak Herald Observer, began publishing, followed by yet another, the Eagle, in a market traditionally held by The Alaska Star.

In Alaska, community newspapers publish a mix of hyper-local and some statewide coverage and are available, usually for free, at coffee shops and other businesses. For Girdwood and Eagle River, both communities unto themselves within the Municipality of Anchorage, the papers aim to inform people about daily goings-on that, while not necessarily remarkable, are nonetheless important to fostering the connections that underpin civic life.

Amy Armstrong took over as managing editor at ECHO News after working as a reporter for the Star since 1999. Armstrong said she has no hard feelings about her former employer, but she and editor-in-chief LJ Kennedy are not shy about pointing out the relative strengths of her new one.

The bubbly duo dismiss the Star's reliance on wire service copy to fill pages. They tout their own paper's coverage of local sports and openness to assigning stories to untested local writers, including high school students and senior center residents.

And they point to local ownership as a competitive advantage. ECHO News is owned by the Anchorage-based Martone family through another business, Eagle River Printing. The Martones had printing facilities and relationships with advertisers through Alaska Cache, a direct-mail marketing mailer they produce.

Morris Communications, a national media company based in Augusta, Georgia, owns the Star, whose publisher, Deedie McKenzie, declined requests to comment for this story.

"The Star did a really good job covering the community," Armstrong said, recalling her years at the weekly. "I think like anything else over the years, the financial commitment to local journalism by a large corporate owner diminishes."

Armstrong's and Kennedy's hackles were raised somewhat more by the appearance in December of the area's newest paper, the Eagle, which is owned by Arizona-based Wick Communications, publisher of the Mat-Su Valley Frontiersman and the Anchorage Press. Wick's Alaska-based publisher, Dennis Anderson, did not respond to several calls and emails for this story.

On the one hand, the existence of three weekly papers in a community of just 30,000 people is further verification to Armstrong that Eagle River-Chugiak is "the center of the universe."

But she and Kennedy also see the new publication as a threat.

"I've heard through the grapevine that they intend to 'blow us out of the water,' " Armstrong said, "I don't mean to be territorial but I want to remind people that we're here and they're not."

ECHO News prints about 5,000 copies each week and delivers to more than 60 locations. It is strict in defining its coverage area as the communities between the Knik and Eagle rivers and views Wick's encroachment as a serious affront and a threat to local advertisers because it promotes rival Mat-Su valley businesses to the Eagle River community. For now, ECHO News has benefited from a flurry of defensive advertising.

"It has helped us," Kennedy wrote in an email. "Our local advertisers have been pouring in to counter the Eagle from taking their business."

In small communities, the pedigrees of relationships, both professional and personal, can be extensive. Former Alaska Star owner Lee Jordan, who was once Armstrong's boss, now writes a history column for ECHO News. Frank Baker, who has also written for the Star, has an outdoors column. Along with Donadieu, the Gazette's graphic designer Matthew Bailey is also a former employee of the Turnagain Times.

The close relationships extend outside the news industry. With small staffs, the so-called "Chinese wall," industry-speak for the separation between news and advertising that ensures coverage remains unaffected by a newspaper's business concerns, is regularly breached out of necessity.

As the Gazette's publisher and editor, Donadieu courts advertisers and covers them when they make news. Armstrong and Kennedy have an ongoing conversation about whether to stick to positive news only, as Kennedy would prefer, or cover everything newsworthy — both good and bad — that happens in the community, as Armstrong is accustomed to doing. In the Turnagain Times and The Alaska Star, marketing and public affairs professionals also have news bylines.

While ECHO News grew into the journalism business from its roots in marketing, Donadieu of the Glacier City Gazette started with a news background and has been educating himself about how to win business from advertisers, which are an indispensable revenue source for all newspapers large and small.

He said is proud of the way he has distinguished his paper from his competitor, with full color, a magazine-style layout and an emphasis on high-quality photography. During the peak summer season, he printed 3,500 copies for distribution to post office boxes and businesses in Girdwood and other communities along the Turnagain Arm.

"We do Page 7, which is a full page of photos. That's one of the first things people turn to. They open it up and want to see the pictures."

He has also decided not to publish opinion pieces, further distinguishing his paper from the Times.

"I've got opinions but I don't push them," he said. "There's plenty of opinion out there and people can get it if they want it."

Like ECHO News, Donadieu touts the benefits of a locally owned paper, saying he is fostering stronger, more cordial relationships with the community of about 2,000 people, and others nearby, than his competitor. Turnagain Times owner Ken Smith, who no longer lives in Alaska, refused requests to comment about the Glacier City Gazette.

Donadieu said the tone of his paper "is generally pretty positive" but does not shy away from the controversial. He said City Council meetings, the Girdwood Board of Supervisors, the Land Use Committee and the Public Safety Advisory Committee are all priorities in his news coverage, as are local business developments.

"Yes, it's to celebrate what we have here, but if difficult stories need to be written, we need to do it," he said. "If difficult issues are handled fairly and responsibly, that's going to go over well."

Whether Eagle River-Chugiak can ultimately support three community newspapers and Girdwood has room for two is an open question. There is precedent for multiple papers in other small Southcentral Alaska communities. Homer already has two community weeklies, and Seward has two, plus an online-only local news source.

Donadieu said a worthy rival provides a valuable opportunity for pushing oneself to improve and believes that his paper will prevail should the market prove too small for both.

"If you don't have competition, you end up getting fat and lazy," he said. "The Gazette is going to be around for a while and will be entering its second year in good shape."