Third quarter jobs down 9,000 from year before; biggest decline since oil prices crashed

Alaska lost 9,000 jobs in late summer 2016 from the number of people employed the year before, the biggest decline yet in the current recession as low oil prices continued to shred the economy.

The job losses, reported by the Alaska Department of Labor and Workforce Development on Friday, extended from July to September. Some decline is normal in that period, as tourists leave and salmon fishermen put up their nets, but other factors made the job picture much worse.

Employment cuts across Alaska have mounted monthly since late 2015, leading to four straight quarters of job decline as Alaska remains mired in recession with the nation's worst unemployment rate.

The oil and gas sector was particularly hammered in the three-month period, according to the report. The industry employed 3,640 fewer jobs compared to third quarter 2015, a 26 percent drop.

While health care and tourism-related jobs were once again bright spots, the loss of higher-paying petroleum positions drained other sectors as oil companies thinned their ranks of contractors and workers spent less at restaurants and shops.

The state expects to see the oil and gas losses slowing soon, in part because producers and explorers have already made giant cuts.

The industry's record employment of 14,800 jobs in March 2015 sagged to 11,700 positions in December, a preliminary estimate.

"They are very dramatic losses and it's happened very quickly," she said. "But in the last five years we had very dramatic gains in the oil and gas industry."

Statewide, employment during the quarter fell by 8,799 jobs, or 2.5 percent. Average employment was 345,549 positions.

Alaska's oil-based economy continued to perform inversely to the Lower 48, booming when oil prices rise and crushed when they fall. Slope crude oil inched up to $55.46 a barrel on Wednesday, about half its value from 2½ years ago when the slide began, but up from the high 20s of a year ago.

[After years of growth, the Anchorage housing market flattens]

The latest state figures show that in December, Alaska recorded the nation's highest unemployment rate at 6.7 percent, one-tenth of a point higher than New Mexico and well above the national average of 4.7 percent that month.

The state has seen four straight years of population out-migration, with more people leaving Alaska than coming, though births have helped offset the drop.

The latest annual migration loss was 4,290 for the year ending July 1, a decline from the two prior years that each recorded out-migration of about 6,500 people.

"The net-migration losses in the last few years have been connected to growth down south," said Eddie Hunsinger, state demographer. 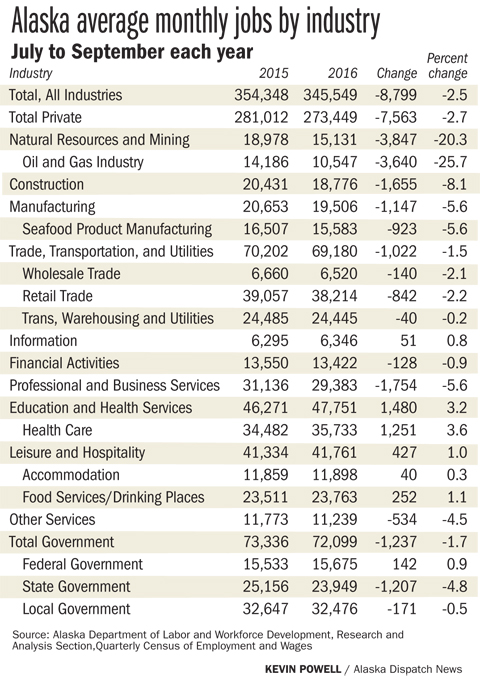 The gainers were led by health care, a subcategory of education and health services, adding 1,251 jobs, a 3.6 percent jump from the year earlier.

"The leisure and hospitality sector also grew with a strong summer visitor season, adding jobs in the food services and arts, entertainment and recreation industries," the department reported.

Though "total government" lost jobs, federal agencies kept growing — adding 142 jobs or 0.9 percent — though more slowly than the first half of 2016.

* Construction jobs fell by 1,655 jobs, or 8.1 percent, as spending slowed in the oil patch and on capital projects.

* The professional and business services sector lost 1,754 jobs, a 5.6 percent decline the agency also linked to the oil industry.

Preliminary estimates for fourth quarter 2016 indicate to Schultz that the loss will come in higher than the third quarter's 2.5 percent.

Economists expect the losses in the oil and gas sector will continue to ripple out into secondary fields that depend on household and business spending, such as retail and grocery stores, said Schultz.

The worst of those effects are probably not over yet, she said.

After surviving a mass shooting in Las Vegas 5 years ago, this Alaskan lost everything. Then he built something new.

The first airplane in Anchorage: From the milestone flight to its tragic coda