Can a new generation of satellites bring broadband to all Alaska? 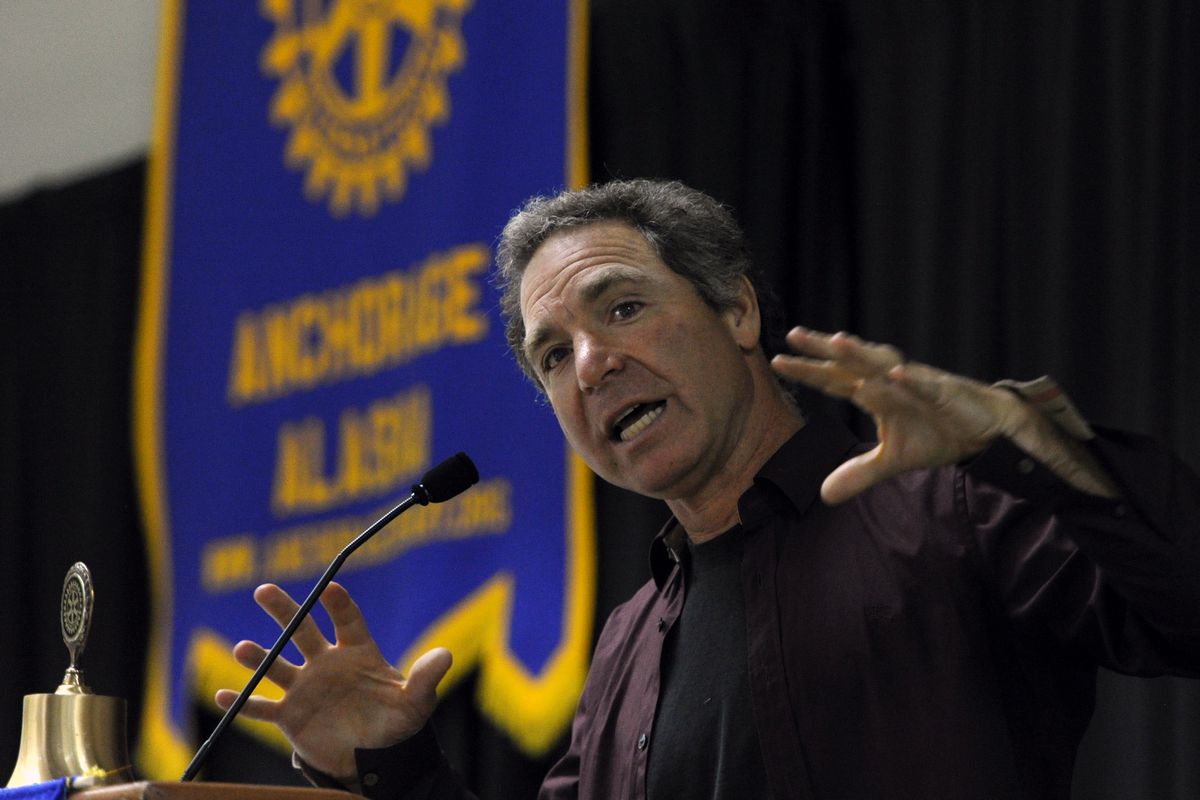 A satellite startup promising to be the first provider of universal internet service plans to use Alaska as a proving ground to show it can bring affordable, reliable broadband to some of the world's most isolated communities.

OneWeb plans to launch a constellation of satellites to, in theory, reach "every square inch of the world" and start bringing an estimated 4 billion people without internet access online, said Greg Wyler, the company's founder and executive chairman.

Alaska would be among the first places in the world to receive the new service, he said. Launching in the small, isolated market would allow OneWeb to test and debug the system without disrupting service to a large number of customers. And Wyler figures that if the system can function in the tough northern climate, it can work anywhere.

"We're looking to do Alaska as one of the early locations because it has a really challenging broadband problem, and if we can solve Alaska, it's a great demonstration of what can be done everywhere else," Wyler said in a recent interview.

No company, satellite or otherwise, has been able to cover the whole globe with broadband signals. Alaska is emblematic of the challenges in trying. Across wide swaths of the state, broadband access is slow, spotty and expensive — or nonexistent. The main relay systems of broadband — fiber-optic cable, microwave towers and satellites — are expensive relative to the number of available customers.

Other broadband projects include a network of microwave towers in Western Alaska called TERRA built by GCI, the state's largest telecom, and a fiber-optic system serving several communities from Nome to Prudhoe Bay built by Quintillion, a company that intends to connect London and Tokyo through the Northwest Passage. And telecoms have agreed to expand broadband service to more than 100,000 new customers in Alaska over the next decade in exchange for continuing federal subsidies.

Wyler, who has an entrepreneur's way of making hard problems sound totally beatable, said OneWeb can have "the Alaska broadband problem solved" in about three years without federal subsidies.

"We could bridge the digital divide in Alaska by the end of 2020, and that means everyone who wants access has the ability to get it," he said. "We're done. Broadband is available."

The prospect of turning more than half the world into a new base of broadband customers has attracted serious backers, including the chipmaker Qualcomm, aeronautics maker Airbus, Japanese telecom SoftBank and celebrity investor Richard Branson's space company, Virgin Galactic. These and other partners are contributing capital, labor and expertise to launch an initial constellation of 900 satellites, at a cost of $3 billion, by 2021.

The satellites will move in procession from pole to pole, some orbiting in opposite directions. From the ground they would appear to rise in the north and set in the south, or vice versa. Close to the poles, their paths would converge like the lines on a beach ball.

Traditional satellites, while they seem futuristic, are manufactured in a way that appears old-school and almost from before the Industrial Age. It's a labor-intensive process in which the individual satellite is carefully handcrafted, driving design and production costs into the hundreds of millions of dollars.

OneWeb claims to have figured out how to dramatically cut costs through automation, mass production and the use of chip technology to produce smaller, more efficient satellites. As of the end of July, the company had started its assembly line in Toulouse, France. Another line will run near one of the company's planned launch sites in Cape Canaveral, Florida.

Wyler describes the system as "a bunch of cell towers in the sky," with Qualcomm's chip technology, used in cellphones, helping make the satellites more powerful, pound for pound, than existing ones. With Airbus, the company has also been able to reduce their size.

The company also says it has solved another vexing problem with satellite broadband: The time it takes for a customer's system to ping a satellite and receive a return signal typically creates noticeable delays while browsing or streaming.

OneWeb expects customers not to notice the lag time on its system because its satellites will travel in low-Earth orbit, 750 miles high, a good 21,250 miles closer than satellites providing broadband today. Wyler said the closer orbit will help deliver speeds that accommodate the timing of natural language — customers will be able to stream video and conduct video calls.

With so many satellites going up, critics have raised concerns about space debris and interference with existing satellites and their signals. But Wyler guaranteed that spent satellites would leave their orbits and burn up upon re-entry into the atmosphere. OneWeb has coordinated with Boeing to resolve collision issues and with other satellite companies, like partner Intelsat, to avoid signal interference and to back up OneWeb's system.

As Wyler tells it, OneWeb appears to be poised for success. In late July, he was in Alaska to talk up the company and its progress in meetings with Gov. Bill Walker and other politicians and members of the state's telecom industry. He gave a lunch presentation to the Anchorage Rotary Club and had dinner at the Crow's Nest, the restaurant atop the Hotel Captain Cook, with Arctic Slope Regional Corp. chairman Crawford Patkotak.

But there is some skepticism in the market that the company can deliver a broadband-for-all utopia.

Other satellite networks have gone bankrupt attempting to achieve worldwide telecom coverage. Iridium, by cellular company Motorola, also had big, credible backers and spent $5 billion on a system that the Smithsonian's Air and Space magazine called "archaic by the time it was deployed." The company went bankrupt in 1999, but continued operating and now provides coverage to clients requiring service in remote areas, including oil and gas, maritime and aviation companies.

Andrew DeGasperi, an equity research analyst who covers data centers and satellites for investment firm Macquarie, said he was concerned about the challenging logistics and how quickly the company would be able to sign up customers and ramp up revenue.

"They're spending several billion dollars and operating in an orbit with a lot of debris and traffic," said DeGasperi, who is based in New York. "And it takes a long time for companies that are new to satellites to generate the revenue required to support some of these capital investments."

Another concern is the percentage of the constellation that will be idle at any given time as the satellites pass over oceans or other areas where no one is using the service.

"Most of the Earth's surface is water. Water doesn't have any income to spend on broadband, so you've got to make your money on the other third of the system and that's a challenge," said Tom Brady, an engineering manager at Microcom, an Anchorage-based satellite retailer.

After the bankruptcies of Iridium and another company, GlobalStar, Brady and Microcom vice president Chuck Schumann said they are "cautiously optimistic" about OneWeb.

"While we're very excited about any new services that are going to cover Alaska, we're also realists because we've been through this so many times," Schumann said. "Someday this is all going to happen, but right now we're just being a little bit careful and don't want to pin all our hopes and dreams on something that's brand-new."

Christine O'Connor, executive director of the Alaska Telephone Association, expressed her concern in a single word: "Price." Cost is a major concern in a state where monthly consumer broadband bills can easily spike into the hundreds of dollars.

"It's never the problem in Alaska that it can't be done, it's that it's expensive," O'Connor said. "If they could turn this one, it really would be transformational for Alaska."

Wyler could not give specifics on pricing, saying that OneWeb will provide service "comparable to a cable modem at comparable prices." It will sell broadband capacity to telecom retailers like Microcom, which would then package it into internet plans for consumers. Alaska Communications Systems was the first telecom in the state to formalize its interest in reselling OneWeb broadband.

There's also risk that another company could beat OneWeb into space. Of the dozen companies that have applied to the Federal Communications Commission to operate similar systems in the United States, OneWeb is the only one with a permit. But SpaceX, O3B or others could emerge as a competitor.

Wyler said the skepticism is understandable.

"It is horrifically expensive, it is really hard to do and you have to really, really want to do it. But when we brief people and walk them through what we're doing, they become more comfortable," Wyler said.

Aside from the potential for lower prices and better service, OneWeb could also upend the telecom market in Alaska by bringing competition to dozens of communities where none exists.

"These people who are trying to cover the rest of world and getting excited and pouring money in are good for Alaska because it will have a lot of choices in the near term," DeGasperi said. "I would be surprised if you don't have a sizable improvement in connectivity in Alaska in five to 10 years."

Correction: This story was updated to reflect the fact that the telecom Iridium continued to operate after it went into bankruptcy court and now provides services to remote locations.