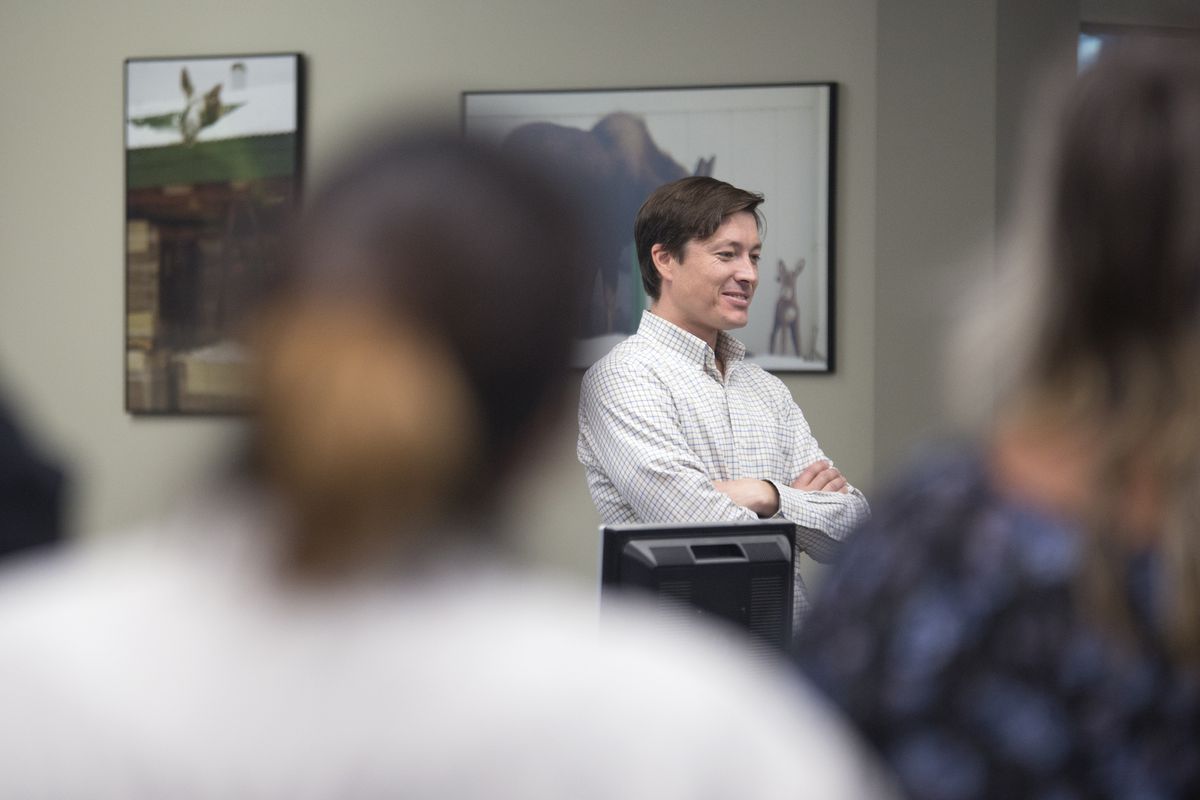 The new publishers of Alaska Dispatch News sought to reassure their staff Monday that the newspaper and news website would continue to publish as it works its way through Chapter 11 protection under federal bankruptcy law.

Ryan Binkley, interim co-publisher of the state's largest newspaper and one of the leaders of a group that is poised to buy it, said in meetings with nervous staff that Alaska Dispatch News will continue its print edition and that he doesn't plan to be involved in editorial decisions — at least for now.

He also said he and the other members of his group have no definite plan for fixing the paper's dire financial situation.

"There are still papers, a lot of them, particularly of this size in a community like this, that are making money," said 38-year-old Binkley. "We're going to be looking under every couch cushion for loose change."

Binkley said he would focus on increasing revenue and reducing expenses — "the only way to get to break even is to increase the one side and decrease the other" —  but he wouldn't say whether cutting costs will include layoffs.

Those details would be decided by the publishers' consultant, Jerry Grilly, the one-time publisher of the Anchorage Daily News, who retired in 2012 from the Denver Post where he served as president and chief executive.

Alaska Dispatch News LLC filed for Chapter 11 bankruptcy protection on Saturday. Binkley said Monday the business lost $4 million in the first six months of the year. The potential buyers' challenge, he said, will be to stop the bleeding.

Binkley said his family has researched the decline of newspapers around the country and doesn't see the print side of Alaska Dispatch News going away.

Weekday print circulation for U.S. daily newspapers dropped 10 percent between 2015 and 2016, according to the Pew Research Center.

"Everyone seems to say the whole future is in digital, and certainly there's got to be a strategy for digital," he said. "But print media's not dead. It's not dead nationwide and it's certainly not dead in Alaska."

It's not yet a sure thing that the future owner of the paper will be Evans' Alaska Media and Binkley's Binkley Co. LLC, the two business entities now in control. The pending sale is complex, and allows for other interested bidders to come forward in the weeks ahead before the bankruptcy process is completed.

Meanwhile, Alice Rogoff — through Alaska Dispatch News LLC — still owns the company. Binkley said two smaller operations developed under Rogoff, the news site ArcticNow.com and the travel site ShowMeAlaska.net, will be spun off from the paper and operated by Rogoff after a sale.

"This is a complicated and sort of tricky process and it's not without uncertainty," Binkley said. He said his group thinks it is "unlikely" that another party will swoop in but it's "not outside the realm of possibility."

Aware that the Binkley family once considered buying the Fairbanks Daily News-Miner, Rogoff approached them in April to gauge their interest in Alaska Dispatch News, Binkley said, and conversations took place over several months.

He also said there was a national search for buyers, and that as of Friday the Binkleys and Alaska Media were the only ones left standing.

"Why are we doing this? That's probably the No. 1 question people have asked me in the last 48 hours," Binkley said to staff. "There's no simple answer to why we're doing it."

Binkley said he doesn't plan to be part of editorial decision-making at the newspaper, "at least here in this short period of time." If his family does become one of the owners, he said that in years to come he would "be much more involved, maybe, as an owner."

His father, John Binkley, president of the Cruise Lines International Association of Alaska and a former state legislator, is a possible 2018 Republican candidate for Alaska governor.

"I can tell you that there's no connection to his possible run for office, if he decides to at all," Ryan Binkley told staff. "That's merely an accident of timing."

The Binkley family is from Fairbanks and made its money in tourism and hauling freight on the Yukon River. Binkley Co. LLC is made up of Ryan Binkley and his siblings Wade Binkley, 35, James Binkley, 30, and Kai Binkley Sims, 37.

Ryan Binkley, who still lives in Fairbanks, said that his family started looking a few years ago at diversifying their seasonal business. Their losing bid to buy the Fairbanks Daily News-Miner when it was up for sale a couple years ago was their first foray into the media industry.

"It's what piqued our interest in this business and in this industry in Alaska," Binkley said. "So we tried to stay very close to it over the last couple of years, keeping track of what was going on."

Binkley said that the failure of the state's largest newspaper "would be catastrophic for a state that is in tough shape right now."

The group has committed up to $1 million in working capital to keep the paper operating through the bankruptcy process, which Binkley said could be expedited and done by winter.

The best case, he said, is that the business will emerge from Chapter 11 in a month.

The goal of a potential purchase is to keep the business going and to make it a viable entity that can "stand on its own two feet," Binkley said.

It's not clear yet how they will do that. More than 200 people work at ADN, including part-time employees.

Binkley told staff that because his family doesn't know a lot about the newspaper industry, Grilly will be in charge of day-to-day operations. Grilly served as general manager and then publisher of the Anchorage Daily News from 1979 to 1993, a period when the paper overtook the older Anchorage Times in one of America's last newspaper wars.

"He was really responsible for moving the Denver Post into the digital space, monetizing it, and he's going to do another magic trick here just like he did there," Binkley said.

Grilly said his new job entails working with departments at the paper to "identify efficiencies that will ensure the future of Alaska Dispatch News." Another part of his work will be to come up with advertising ideas and programs to help generate revenue, he said.

Binkley said it is unclear what will happen to the newspaper's inoperable replacement press, which is in a building on Arctic Boulevard. Construction there has stalled, and the paper's current press is caught up in a lawsuit from telecommunications company GCI, which owns the building at 1001 Northway Drive that houses it.

That suit seeks to evict ADN's operations there and accuses the newspaper of leaving utilities and some rent unpaid.

"Our goal is still, as we stand here today, to be able to print the paper, for the long term, at the Northway facility," Binkley said.

Compared to Rogoff, who is married to billionaire equity fund executive and philanthropist David Rubenstein, the new group's resources are much more limited, he said.

"There's probably nobody that's ever committed the kind of resources that (Rogoff) has to ensuring that an institution survives," Binkley said. "That should be her legacy. Whatever else happened, she committed an amazing amount of resources to this place.