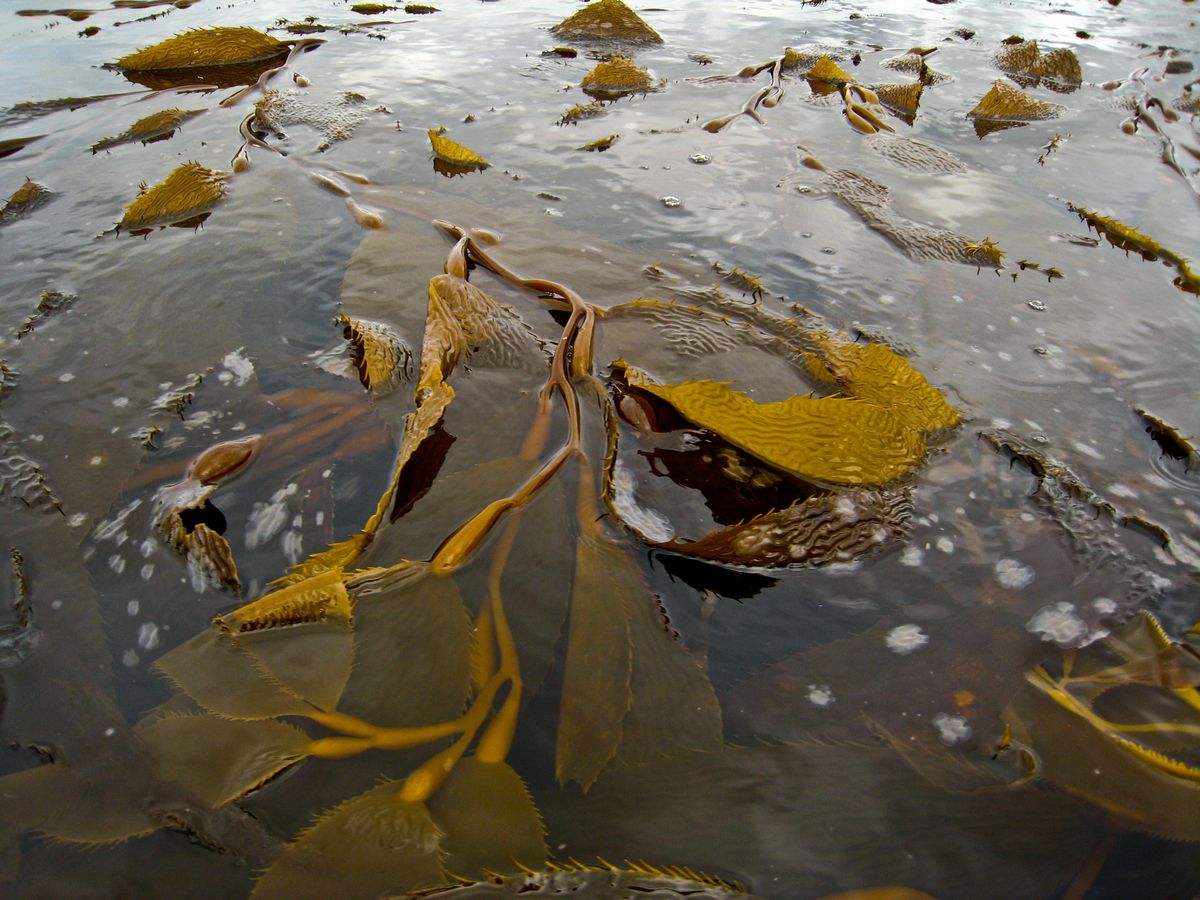 Kodiak is at the center of a national push to produce biofuels from seaweeds.

Agents from the U.S. Energy Department's Advanced Research Projects Agency-Energy recently traveled to the island to meet with a team of academics, scientists, businesses and local growers to plan the first steps of a bicoastal pilot project to modernize methods to grow sugar kelp as a fuel source.

The project is bankrolled by a $500,000 grant to the University of Alaska Fairbanks through a new program called Macroalgae Research Inspiring Novel Energy Resources. It has funded 18 projects to develop new tools to help the U.S. grow into a "world leader" in production of macroalgae (seaweed) as fuel, chemical feedstock and animal feed.

"By further developing this untapped resource, the U.S. could eventually produce enough seaweed to handle as much as 10 percent of our demand for transportation fuel," according to an ARPA-E release. The group estimates the U.S could produce at least 500 million dry metric tons of macroalgae per year, which could yield about 2.7 quadrillion thermal units of liquid fuel.

"The exclusive economic zone of the U.S. oceans (out to 200 miles) is equivalent in size to the nation's whole land area," said Marc von Keitz, ARPA-E program director. "Right now we are at the very early stage and it is a very manual, artisanal type operation. If we want to make large quantities so it is relevant for energy, we need to think about how we scale it up."

In 2014, the world produced 25 million wet metric tons of seaweed through a combination of wild harvesting and highly labor-intensive farming techniques. Current operations are not capable of supporting a viable seaweed-to-fuels industry.

"The vision is to have a demonstration on the east and west coasts showing that we can grow large fields of seaweed in a way that is efficient and cost effective with petroleum and other energy enterprises," said Alaska project leader Mike Stekoll, a biochemistry professor at University of Alaska Southeast in Juneau.

[With state support, mariculture is on the rise in Alaska]

The first ocean tests will be conducted by researchers at the Woods Hole Oceanographic Institution in Falmouth, Massachusetts.

"We are not sure yet what the final design will be, but it will be scalable to any size. These trial areas would probably be a couple hundred meters long and 50 or so meters wide," Stekoll said.

Kodiak's role, in collaboration with the Alaska Fisheries Development Foundation, will be to figure out the most cost-effective way to grow, harvest and transport large amounts of sugar kelp based on technologies applied in the fishing industry.

"One of the things that intrigued us is that you have this very experienced fishing industry and experts who have done a lot of creative and innovative things on a wide variety of vessels," said von Keitz. "We want to take that ingenuity and see if we can apply it to macroalgae. I think it's a big opportunity."

"We are not going to get there in two or three years," he added. "What is important is have a long-term vision and to develop stepping stones toward growth."

Kodiak Island Sustainable Seaweed is one of Alaska's first stepping stones. This year the small growing operation by Stephanie and Nick Mangini produced the state's first successful harvest of 15,000 pounds of sugar and ribbon kelp on a 1-acre parcel.

"It is so cool be a part of revolutionizing the way seaweed farming is done. These 'out of the box' field tests will really make it happen," said Stephanie Mangini.

Part of the overall project will be to assess hazards to navigation and other potential obstacles in offshore and near shore operations.

As far as feelings of "not in my backyard," Stekoll said some places in Alaska are more receptive than others.

"Kodiak is one of the places that sees the value in this sort of enterprise," he added.

Learn more about the potential for a seaweed industry in a new publication by Alaska Sea Grant titled "Seaweed Farming in Alaska."

The proposed 20018 voter ballot initiative aimed at modernizing salmon habitat protections and permitting laws got a green light last week by an Anchorage Superior Court judge after it was rejected by Lt. Gov. Byron Mallott.

The measure, pushed by the group Stand for Salmon, would update state laws for the first time since statehood in 1959.

"I was delighted," Rep. Louise Stutes, R-Kodiak, said in response to the reversal.

She said the pending voter initiative will "fire up" action by Alaska policymakers in next year's legislative session, notably, those on the senate resources committee who she claims are "adamantly opposed" to any move that might curtail or cut taxes on oil and gas development.

"My intent is not to put any resource out of business," Stutes said. "My intent is if you are going to develop a resource, you have to maintain clean habitat for our salmon. It may require additional permitting, but we can work together."

The judge's ruling could still be appealed by the state. Meanwhile, proponents must organize to gather nearly 32,000 voter signatures to put the salmon protection measure before voters next November.

It is possible that legislative action could pre-empt that need.

"I believe that if we get something through the Legislature, the initiative won't appear on the ballot," Stutes said.

For the first time since 2013, Kodiak crabbers might be able to drop pots for Tanners in mid-January.

"I'd say it's the best chance we've had in the last five years," said Nat Nichols, area shellfish/groundfish manager at the Alaska Department of Fish and Game in Kodiak.

Crab stocks must reach strict number thresholds before a fishery is allowed to open. Preliminary data from the summer survey indicate two Kodiak districts might have enough legal-sized males — the only crabs that can be retained — to allow for a fishery.

"We will be looking very closely at the southwest and east side to see if we can get to an exploitation rate that we are comfortable with and also gets us above that minimum 400,000-pound harvest guideline," Nichols said.

The survey showed slight improvements at Chignik and the South Peninsula, but Nichols said no Tanner fisheries will open there.

It takes Tanner crabs six to seven years to reach a legal, 2-pound size. Nichols said he believes Kodiak has a shot at a small fishery for the next two years.

"After that, it looks like we might have a gap for a year or three before we get to the next recruitment pulse that would lead to a fishery," he said, adding that there are encouraging signs for the future.

"We are seeing a good bit of small crab in the water again this year," he said, "but they are several years out from being legal."

Laine Welch is a commercial fishing opinion columnist based in Kodiak. Reach her at msfish@alaskan.com.