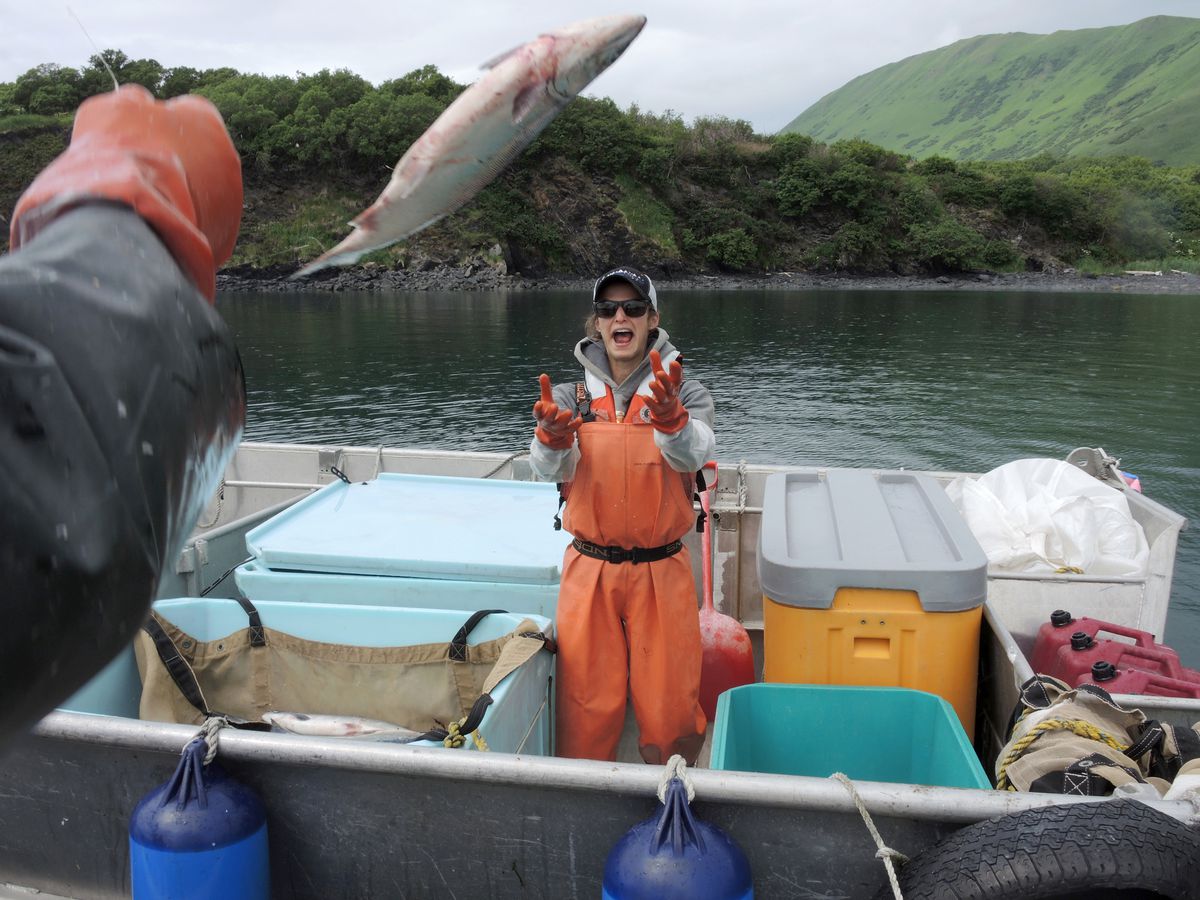 A salmon is tossed to Annie Liotta while readying a load of salmon for the tender in west Kodiak near Larsen Bay, July 2017. (Anne Raup / Alaska Dispatch News)

A salmon is tossed to Annie Liotta while readying a load of salmon for the tender in west Kodiak near Larsen Bay, July 2017. (Anne Raup / Alaska Dispatch News)

It's steady as she goes for the values of Alaska salmon fishing permits, with upticks in the wind at several fishing regions.

As well there should be after a salmon fishery that produced 225 million fish valued at nearly $680 million, a 67 percent increase over 2016.

Bristol Bay drift salmon permits trade more than any other due to sheer volume (1,800), and it's no surprise the value is increasing after one of the best fishing seasons ever. But they are not "rocketing up" in value, said Doug Bowen of Alaska Boats and Permits at Homer.

"They haven't come up at Bristol Bay as much as I would've anticipated, but maybe that's yet to come," he said, referring to potentially strong 2018 salmon forecasts being released soon by state fishery managers.

The trend appears similar for permit values at other major fishing regions.

"It's interesting that some years there can be a huge difference between a drift gillnet permit at Bristol Bay, at Prince William Sound or Area M on the Alaska Peninsula. For whatever reason, this year they are all about in that same $140,000 range," Bowen said.

Elsewhere, the slide in the value of Cook Inlet drift permits reflects three lousy salmon seasons, despite being able to stack permits and fish extra gear.

Meanwhile, more fishing boat action is going on fueled by the extra $200 million or so circulating from a great salmon season.

"We're seeing interest in buying and building new boats or upgrading to a bigger or newer boat," Bowen said, adding "there is definitely movement with gillnetters and seiners."

Wrap-ups of the 2017 salmon season reveal some rewarding paydays for Alaska fishermen, with a few exceptions.

Reports trickling out from regional Alaska Department of Fish and Game offices show that Upper Cook Inlet salmon fishermen were among the losers. A total catch of about 3 million fish was 13 percent below the 10-year average and the sockeye catch was the lowest in 10 years. The preliminary value to UCI fishermen of $23.7 million is down 21 percent.

On the Yukon River, 401 permit holders fished for chums this summer, 388 at the Lower Yukon where the average paycheck was about $4,000. At the Upper Yukon, 13 fishermen each averaged $21,000 for their chum catches – both dock values were above the 10-year average.

The biggest fish bucks went to Bristol Bay fishermen whose harvest of nearly 40 million salmon paid out at $215 million, double the 20-year average.

Prices for catch shares of Alaska halibut remain in the nosebleed area but they've been stanched a bit, at least for now.

"They seem to have stabilized somewhat at high ranges," said Bowen of Alaska Boats and Permits at Homer. "Seventy-some dollars a pound in Southeast, $60 in the Central Gulf and in the $40s in the Western Gulf. The values stair-step down as you move farther west."

A big nosedive in halibut dock prices also has rippled the market. Prices that had for several years been in the $6-$7 per pound range dropped closer to $5 at major ports, and some halibut trips were even being turned away.

"When they don't care if you turn that boat around and drive away, then you have to start taking them seriously that there are issues in the marketplace," Bowen said.

The price pushback coincides with a broadside from millions of pounds of cheaper Atlantic halibut flooding fresh fish markets.

"That has put a lid on the halibut quota share market and slowed down interest," said Osborn of Dock Street Brokers in Seattle. "But it's still a seller's market, within reason. There is quota out there at prices people aren't going to touch. Still, the transactions that have occurred are at lofty prices."

Halibut fishermen will get a first glimpse of potential catches for 2018, and that usually causes a quota share price blip up or down.

"If the survey results show it's really strong for one halibut area or another, you'll definitely see folks trying to buy to get out ahead of any price increases," Bowen said.

Recommended halibut catch limits for 2018 will be revealed by the International Pacific Halibut Commission on Nov. 28-29 in Seattle.

The Fall Fishermen's Expo is set for Nov. 7-9 at Centennial Hall in Sitka. The event, co-hosted by the Sitka Seafood Festival and Alaska Longline Fishermen's Association, offers free workshops, training, celebrations and social gatherings, including a first Fishermen's Job Fair to connect prospective employers and crews.

American Seafoods Co. is accepting applications for its latest round of grants to Alaska projects that focus on hunger, housing, safety, education, research, natural resources and cultural activities. Most grant awards range from $500 to $3,000 from a total pool of $38,000.

Since 1997, American Seafoods has granted more than $1.4 million to Alaska organizations and programs. The company also awards educational scholarships to rural Alaska students.

Applications are available by emailing kim.lynch@americanseafoods.com or calling 206-256-2659. The deadline to apply is Nov. 27.