Frozen seafood gets a bad rap, but a Sitka fishermen’s group is trying to change that 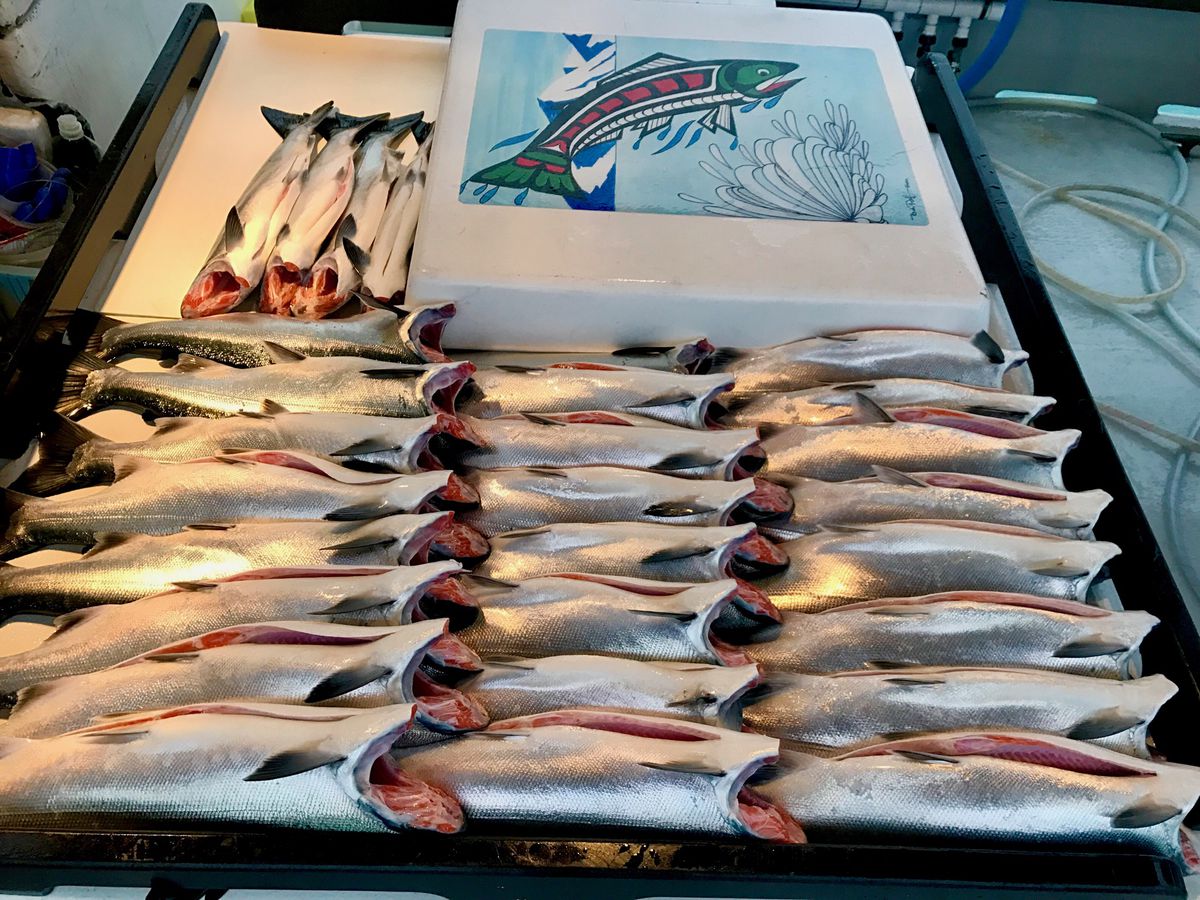 A hatch-full of cleaned coho ready to go down into the Nerka’s -40 degree fish hold. (Tele Aadsen)

A hatch-full of cleaned coho ready to go down into the Nerka’s -40 degree fish hold. (Tele Aadsen)

Alaskans pull home-packs of fish from their freezers all year round and know it will cook up nutritious and delicious. Yet there is still a perception that fresh seafood is always better than frozen.

A Sitka fishermen's group has set out to counter that view, and prove that properly frozen fish has clear advantages over fresh fish sold to consumers.

More than 80 percent of the fresh fish/shellfish enjoyed by Americans are imports and can sit for a week or more before being purchased at retail counters. And most people don't know that a boat may be out at sea for days or weeks before it comes in with fish.

"We want to tell consumers exactly what that fish went through from being caught to being frozen, or being flown fresh to you," said Alyssa Russell, communications manager for the Alaska Longline Fishermen's Association.

ALFA has been promoting the merits of flash-frozen fish since 2009 when it launched Alaskans Own, a Community Supported Fishery where customers can pre-order local catches. "As we started expanding our CSF program and selling our fish in bulk to the Lower 48, we realized it is still a stereotype in many places that fresh seafood is better quality than frozen," Russell said.

The fishing group decided to get backup to prove what most Alaskans know: Unless you've just pulled a fish out of the water, the next best option to preserve its goodness is to freeze it.

ALFA partnered last summer with Ecotrust and Oregon State University to put that truism to the test. Aided by a $100,000 U.S. Department of Agriculture grant from the Farmers Market and Local Food Promotion Program, the team conducted a blind taste test with more than 100 subjects who sampled portions of never frozen and flash frozen salmon and black cod.

"We found was that customers liked frozen fish as much or more than they liked the fresh fish from the local grocery stores," Russell said.

"Not only did consumers prefer the frozen fish, but the flash-frozen products also rated higher in quality and freshness, as measured by the CQR," said the Ecotrust Fresh Look at Frozen Fish report, which called the results "telling."

Nearly one-quarter of all fresh seafood at supermarkets goes to waste, the report said, a figure that would be reduced if more Americans accepted frozen choices.

Russell said ALFA will create a multimedia outreach campaign, including materials for industry members and other seafood stakeholders. The campaign also will highlight how choosing frozen fish directly benefits Alaska fishermen because it gives them more market options.

"It takes a lot of the risk out of the market," Russell said. "They can choose to target a different kind of fish or wait to sell until the market changes, or choose not to fish when the weather is bad because they have more flexibility as to how their fish will be stored."

"The ultimate goal," she added, "is to support small-boat communities, fishermen and sustainable fisheries. We feel that one way to do that is to build recognition that frozen fish is high quality."

[Like a conveyor belt of salmon: A Southeast fishing run to remember]

Alaska is the nation's super power with five Alaska ports ranking in the top 10 for seafood landings and values.

"Dutch Harbor keeps its long-time title, 20 years strong now, as our nation's top fishing port for the amount of seafood landed (770 million pounds), and New Bedford, Massachusetts is hanging strong claiming for the 17th consecutive year the highest valued catch ($327 million) mostly due to the highly valued sea scallop fishery," said Ned Cyr, director of NOAA Fisheries Office of Science and Technology, referring to the annual Fisheries of the U.S. report for 2016.

Other Alaska ports making the top 10 list for landings are the Aleutian Islands at No. 2, thanks to the Trident plant at Akutan, the largest seafood processing facility in the U.S. Kodiak dropped a spot to fourth place, followed by the Alaska Peninsula at No. 7 and Naknek at No. 9.

Alaska led all states in seafood volumes at 5.6 billion pounds and values at $1.6 billion.

Alaska pollock accounted for 30 percent of U.S. fish poundage, and 21 percent of the value. Nearly 97 percent of all U.S. salmon landings were from Alaska.

The U.S. continues to import most of its seafood – 5.8 billion pounds in 2016, up slightly. Whatever its source, Americans are eating less of it.

[A closer look at the value of Alaska's seafood industry]

Shrimp held on to the No. 1 spot for America's seafood favorites, followed by salmon, according to a list compiled each year by the National Fisheries Institute based on per-capita consumption in the U.S. Fisheries report data.

Almost all of the drop was attributable to salmon, pointed out John Sackton of Seafood.com.

"Alaska landed 300 million pounds less salmon, mostly due to a shortfall in pinks. When converted to edible weight, this accounts for almost all the drop in salmon consumption," he said.

The biggest winner is cod, Sackton said, as it has taken an increased share of the whitefish market over the past five years, going from 0.52 pounds per capita to 0.66 pounds.

The Pacific Marine Expo will top the half-century mark when the trade show doors open later this month in Seattle.

"Fifty-one years and still growing. We are looking at having 550 exhibitors this year, which is an increase of 30 more companies," said Denielle Christensen, event director for Diversified Communications, which produces marine events and publications around the world.

The Pacific Expo is her favorite, she said, because it has a "strong community feel."

"A lot of folks only see each other once a year at this event. It's just the happiest group of people," Christensen added.

New this year is an expanded Alaska Hall that will house nearly 50 companies, Expo's main stage, the Fishermen of the Year competition and daily happy hours.

Also debuting: The Alaska Symphony of Seafood will hold its annual new products competition and tasting, along with a hall of fame displaying 25 years of past Symphony winners.

The Pacific Marine Expo runs Nov. 16-18 at the CenturyLink Event Center in Seattle. All events are free with preregistration.

"Before the show opens on Thursday if you use the code FISH you will be guaranteed free registration," Christensen said, "and that includes educational programs, the keynote and everything happening on the floor."

The call is out for participants in the IFISH 5 conference, the largest international gathering of fishing, aquaculture and seafood processing industry safety and health professionals.

"We are looking for session proposals for round table talks or panel discussions, as well as abstracts," said Jennifer Lincoln, director of the Maritime Safety and Health Studies Center at the National Institute of Occupational Safety and Health.

Lincoln said it is the first time in a decade the conference has reconvened. The deadline to apply is Nov. 15. IFISH 5 is set for June 10-13 in Newfoundland and Labrador, Canada. Email ifish@mun.ca with questions.