Alaska’s fishing fleet is graying, and that’s not a good thing. A new report suggests answers. 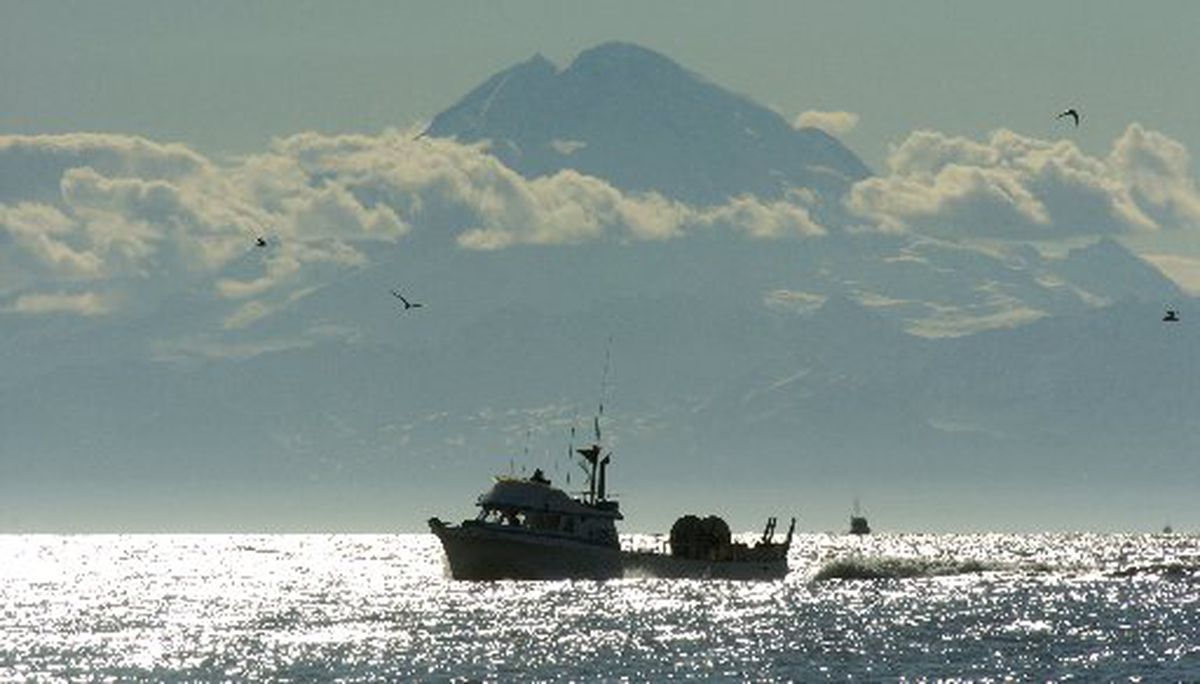 With the 10,197 foot volcano Mount Redoubt towering above in the distance, the 42-foot drift gillnetter “Sosueme” nears the mouth of the Kasilof River during a sunny day in June 2005. (BILL ROTH / ADN archive 2005)

With the 10,197 foot volcano Mount Redoubt towering above in the distance, the 42-foot drift gillnetter “Sosueme” nears the mouth of the Kasilof River during a sunny day in June 2005. (BILL ROTH / ADN archive 2005)

This summer, working as a deckhand on her father's fishing boat in Cook Inlet, Georgeanna Heaverley realized she was right where she wanted to be.

Heaverley, 29, a Soldotna resident and recent University of Alaska Fairbanks graduate in physics, was coming into her own as a deckhand on the fishing vessel Benjana, named for her brother, Benjamin, and herself.

"Being in the middle of Cook Inlet is an incredible experience and something I do not take for granted. It's like nothing else," she said last week. Sometimes, the work seems almost primal.

"The other piece of it is you are feeding the world."

Young fishermen and women like her are an increasingly rare commodity, despite the general health of Alaska's commercial fisheries, according to a series of fishing reports.

For four years, a research team has been examining the graying of Alaska's fleet and what to do about it.

The most recent report, out last week, is called "Turning the Tide." It recommends five steps to reverse what it calls troubling trends of an aging fleet, and a loss of access for rural residents to fish as a career. That goal also underpinned a conference that brought Heaverley to Anchorage, the Young Fishermen's Summit.

Three organizations are leading the studies: UAF's College of Fisheries and Ocean Sciences, Alaska Sea Grant – a partnership between UAF and the federal government to help coastal resources and economies – and the Alaska Marine Conservation Council, a nonprofit that supports fishing communities and works to preserve marine ecosystems.

The average age of a state commercial fishing permit holder now tops 50, up by 10 years from a generation ago, according to state data cited in the new report. Back in 1975, half of rural permit holders who fished locally were 40 or under. Now it's about a quarter.

It's very expensive to get into commercial fishing and to acquire the permit, boat, nets and other essential gear, said Paula Cullenberg, executive director of Alaska Sea Grant and the lead author of "Turning the Tide."

Young people at the summit talked about the near impossibility of becoming a fishing captain. How can a 25-year-old get a $100,000 loan for something as risky as fishing? some asked.

At the same time, the number of permits held by rural residents who fish waters near their communities has dropped by 30 percent, researchers found. In Bristol Bay, it's worse, with half of the permits gone.

Since the state began limiting entry to commercial fisheries in 1975, the number of permits held by local people in rural fishing communities has dropped by almost 2,500, the report said.

Many permits now are held by former Alaskans who have moved out of state, taking their fishing rights with them to Seattle or elsewhere, according to the report.

It's a misconception that most permits lost to Alaska were sold to people out of state, the researchers said.

The new study looked at Maine, Cape Cod, Iceland, Norway, Canada and New Zealand and other places for ideas to help Alaska fishing communities. The researchers suggest these strategies:

— Allow low-cost, low risk ways for people to get into commercial fishing. Commercial fishing in Iceland, for instance, is through quotas consolidated among few owners – corporate fishing that has squeezed out many individual fishermen, the report said. In response, the country now allows individual fishermen to apply for free shares, or quota, of a particular fishery. Iceland also allows local fishermen to catch a certain amount 14 hours a day, four days a week, without having any quota. (That came after the United Nations Human Rights Committee found that the quota system violated the human right to work, the report says.)

— Create districts in which fishing rights or permits must stay, something that Norway and Canada have tried.

— Support on-shore seafood processing and fishing infrastructure such as cold storage units and industrial parks for welders, mechanics and boat builders. Some communities offer seasonal jobs in boat repair, but with the right structure, that could work year-round, the report said.

— Establish a statewide task force to work on the issues.

Meanwhile, some young fishermen are trying to hold on to what they have.

Allysa Apalayak, 29, of Manokotak near Dillingham, said she and her sister inherited a Bristol Bay drift fishing permit from their father. But they don't have a boat – or the needed experience – and haven't used the permit in three years. They were able to let someone else fish under it the first year, through a temporary, emergency transfer.

"We are in fear of losing it," she said. She came to the fishermen's summit, put on by Sea Grant, for help. There were sessions on the business of fishing and the mechanics of it, on fisheries management and marketing. She said she has a sense of what to do next and may try to get financing for a vessel.

Dillingham's Kristina Andrew is 30 and a Bristol Bay commercial driftnet permit holder since 2012. She said she bought it for under $100,000 and had financial help from a loan program run by Bristol Bay Economic Development Corp. She doesn't have a boat, but can use her permit on someone else's vessel, either as the sole permit or as a secondary one that allows a bigger catch.

"There's something very peaceful and very primitive about being out there, and just being able to disconnect from all of it," Andrew says. And at the end of the day, if the catch is good, she's helped to produce something she can see and touch, another rarity in the modern world.

Heaverley graduated with her physics degree in May and figured on getting a tech job, maybe in the Lower 48.

But on the water this year for her third season, she felt she finally had a handle on the skills for fishing a drift gillnet. She was doing work that mattered to her family. Now she wants to keep fishing in Alaska.

"I feel an obligation in the best way to step up and take over, or this industry suffers," she said.