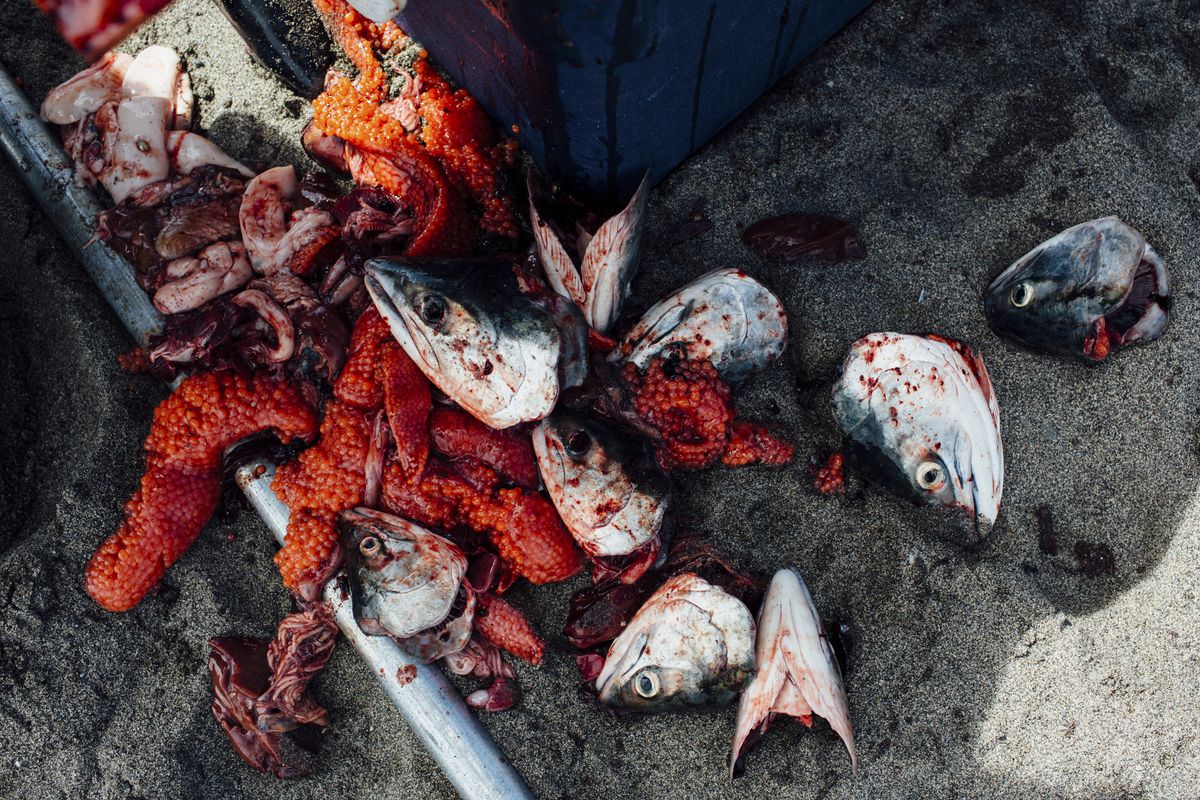 State seafood marketers are rebranding fish parts as "specialty" products and mapping a path for millions more dollars in sales.

Alaska's fisheries produce more than 5 billion pounds of seafood each year. When all the fish is headed and gutted or filleted and all the crab legs are clustered, it leaves about 3 billion pounds of trimmings. Some is turned into meal and oil, but for the most part, the "gurry" is ground up and discharged into local waterways.

"Whether that's heads or guts, milt, or meal or oil or something else, it should be held in high regard," said Andy Wink, a seafood economist formerly with the McDowell Group. "These are products that are out of our normal range but they are specialty items serving niche markets."

It makes the point that Alaska's combined seafood catches, valued at roughly $2 billion at the docks and twice that when processors sell to their buyers, could be worth an additional $700 million or more if so called "specialty" products were added to the mix.

Take fish heads, for example. Alaska produces about 1 billion pounds of fish heads per year, which likely account for most of the processing waste, the report said. Just 1 percent is sold as frozen heads, although a single large salmon head can fetch up to $5 a pound at Beijing supermarkets, according to previous reports. Increasing the frozen market alone could add $100 million to processors' sales, the report said.

Alaska processors produce more than 90,000 tons of fish oil, most of which is burned as a substitute for diesel, or is sold into lower-value commodity markets. A study by the Alaska Industrial Development and Export Authority (AIDEA) showed that fish oil used as fuel rarely must be processed further and is 75 percent as efficient as No. 2 diesel. Fish oil used as fuel in Dutch Harbor offset 13.4 million gallons of diesel fuel in 2015 and saved operators $44 million.

But the payback for fish oils could be much higher. Producing more refined oils for human consumption could help Alaska cash in on the $1 billion supplement market, the ASMI report says, adding that the value of refined fish oil to Alaska could increase to well over $30 million each year.

Arrowtooth flounder numbers have exploded for several decades in the Gulf of Alaska; the fish blankets the bottom of the Gulf of Alaska and competes for food with dwindling halibut. But arrowtooth has little market value because its flesh turns mushy when cooked.

While it is considered a nuisance species, the fish has many unhailed pluses, said Wink. The 81 million pounds caught each year mostly as bycatch in trawl fisheries could provide more protein to the pet food, aquaculture and livestock feed markets. And the pesky flatfish has a pricey trim.

"There is this line of frill meat around the edge of the fish that is a very valuable sushi product called engawa – it can go for upwards of $10, even $20 per pound," he said.

Nearly 70 million pounds of skates are captured by Alaska fishermen each year, but only about a third are frozen flat and stacked in 50-pound boxes for sale. The wings are prized by fish and chips makers in the U.K. and also in upscale French restaurants. Fishermen usually are paid about $0.30 a pound for skates by Alaska processors.

Crab shells have the potential to be one of Alaska's most lucrative specialty products due to high demand in diverse industries. The exoskeleton of crabs contains chitin, one of the most abundant biodegradable materials in the world. Chitin has antibacterial, antifungal and antiviral properties and is insoluble in water. Uses include blood-clotting products, brewing refining agents, pool water clarifiers, food preservation, textile and fabric components, weight loss supplements and agricultural fungicide treatments. Prices for chitin and chitosan, a refined derivative, range from $10 to $3,000 per pound, depending on quality.

Alaska's seafood catches produce 700 million pounds of internal organs such as milt, livers, stomachs and enzymes. Salmon milt is being used as a substitute for silicon in computers and in LED lighting.

A suggested solution, Wink said, could be a cooperative approach.

"Co-ops could be a way to bring the raw material together, share the investment costs and hopefully, bring down the break-even point on a lot of these things," he said.

Side note: Andy Wink has left the McDowell Group after seven years to open a research and consulting practice that will focus primarily on the seafood industry.

Kodiak's Tanner crab fishery opens Monday, Jan. 15 for the first time in four years and Alaskans can pre-order the tasty crab for pick-up in Anchorage.

"Our plan is to have the crab put up a few days after it opens, ship it to Anchorage and have it available at our office on Jan. 29," said Theresa Peterson, Kodiak outreach coordinator for the Alaska Marine Conservation Council.

AMCC has offered seafood "Caught by Alaskans for Alaskans" since 2010. Its Catch 49 "boat to plate" program is a community-supported fishery that offers pre-orders of seasonal local catches and creates more awareness between customers and fishermen.

"The story of where the seafood comes from and who caught it accompanies each box. It tells a little bit about the fishermen who are involved in the program, and provides pictures of the families and boats and recipes," Peterson said. "It also tells about the fishery and its importance to the community of Kodiak."

The 400,000-pound Tanner fishery will go fast since the cod crash has pushed more boats toward crab, which has a reputation for being especially tasty.

The Kodiak crab is the first of several Catch 49 offerings made throughout the year.

The group "Yes for Salmon" will deliver ballot initiative petition booklets signed by an estimated 40,000 Alaskans to the Division of Elections in Anchorage at 7:30 a.m. Tuesday, Jan. 16. The group is pushing to update the state's law governing development in salmon habitat. The law has not been changed since statehood in 1959. If the signatures are verified by state officials, the question will appear on ballots before voters in the November election.

The Trump administration plans to offer 19 offshore oil and gas leases for sale from Southeast Alaska to the Arctic starting next year. One public meeting for Alaska is set for 5:30 to 9:30 p.m. Jan. 23 at the Dena’ina Center in Anchorage. The Interior Department has said it could remove some areas from the final plan depending on public feedback. Public comment on the leasing plan is open for two months.