With start of demolition, Ship Creek condo development gets underway 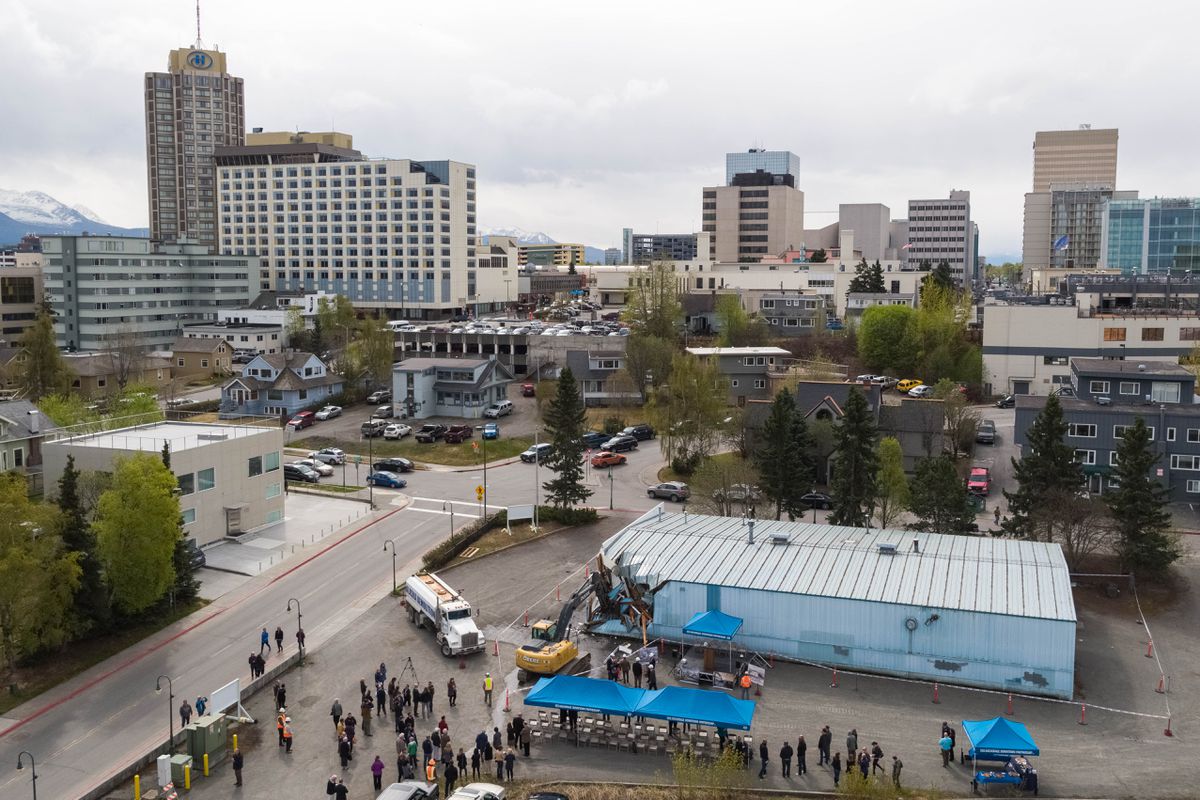 A backhoe begins demolishing a building during a groundbreaking event Wednesday at the future Downtown Edge townhouse-style development in Anchorage. (Loren Holmes / ADN)

A backhoe begins demolishing a building during a groundbreaking event Wednesday at the future Downtown Edge townhouse-style development in Anchorage. (Loren Holmes / ADN)

Demolition started Wednesday on an old building at the northwest corner of West Second Avenue and Christensen Drive by the industrial Ship Creek neighborhood, in a spot where luxury condos will go.

The project is called Downtown Edge. It's on land owned by the Alaska Railroad Corp., and will consist of up to 35 townhouse-style condominiums.

At an event Wednesday to herald the demolition and coming construction, Anchorage Mayor Ethan Berkowitz held up the project as "a sign that downtown is on the way to being revitalized."

Those involved with the project are touting it as the first new housing development of its size in downtown Anchorage in 20 years.

Prices for the condos start at $420,000 and range up to $575,000. The first building will have eight units and will take eight to nine months to build, said Bob Petersen, president of the Petersen Group, a developer on the project.

So far there are nine buyers lined up for condos in the first phase of development, which will involve 19 units, Petersen said. Three buyers are lined up for the second phase.

"At the moment, we have a lot of new prospects," Petersen said. "There's a lot of folks on the fence right now."

[Ship Creek development leaves some worrying: What if there's an earthquake?]

The Downtown Edge condos are the first phase of a larger 11-acre development called The Rail, which eventually aims to draw commercial tenants as well.

"This is just the beginning of a larger project to bring residential development to downtown Anchorage," said Jon Cook, chair of the Alaska Railroad Corp. board of directors, at Wednesday's event.

The Municipality of Anchorage's building safety department approved the geotechnical aspects of the project after two engineering firms authored reports on soil and stability at the site, which is rated as having high or very high susceptibility for ground failure in an earthquake.

The total value of the Downtown Edge development is about $17 million, Petersen said. Financing for the project comes from First National Bank Alaska.

The timeline for the completion of the whole Downtown Edge development is "a moving target," Petersen said, depending on sale activity.