Another prank retail sign has popped up in Anchorage, this time for Tesla 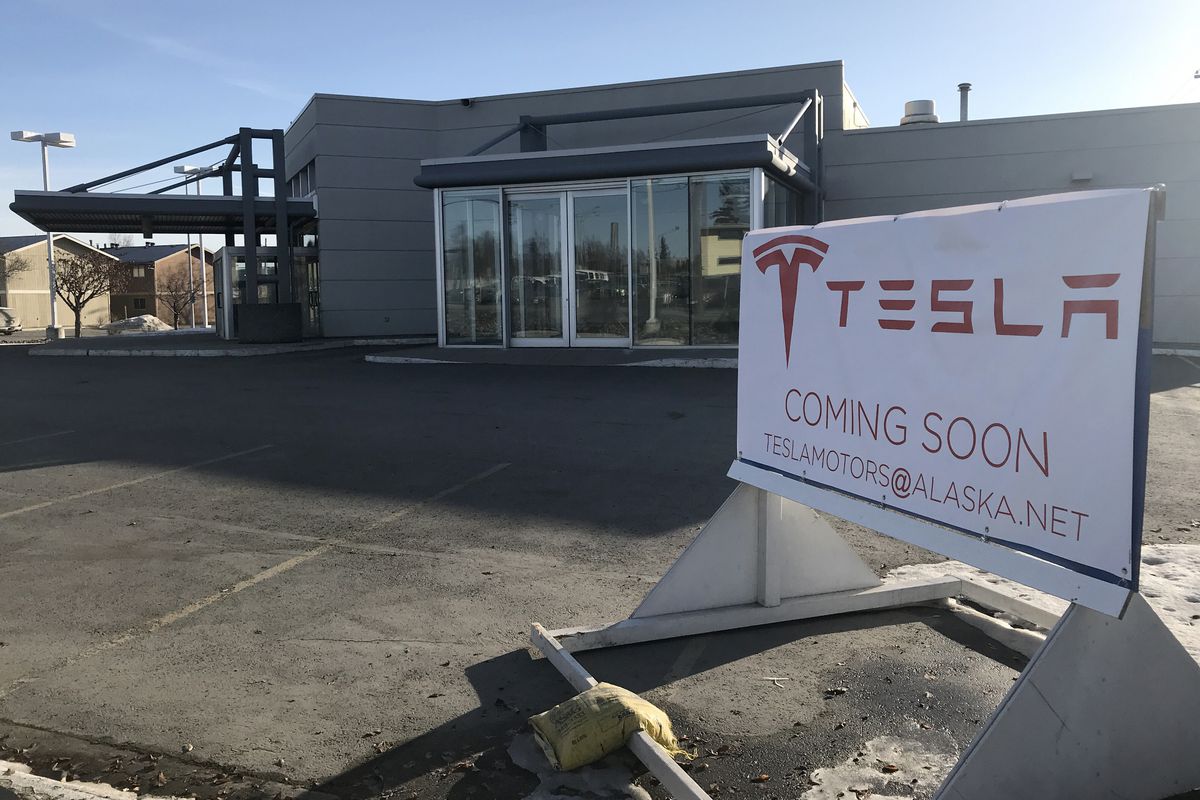 A Tesla sign on Gambell Street near East Ninth Avenue in front of a former auto dealership in Anchorage March 26, 2019. A person reached via the email address on the sign confirmed it’s a prank. (Annie Zak / ADN)

A Tesla sign on Gambell Street near East Ninth Avenue in front of a former auto dealership in Anchorage March 26, 2019. A person reached via the email address on the sign confirmed it’s a prank. (Annie Zak / ADN)

If you’ve driven down Gambell Street in Anchorage this week, past Ninth Avenue, you might have seen it: a white sign that reads “TESLA COMING SOON” in the parking lot of a vacant building.

But if you’re a fan of the electric car company, don’t get too excited. It’s a prank.

That’s according to someone responding to emails Tuesday from the address listed on the sign. What’s more, the same group of people who put the Tesla sign there is also responsible for other spoof signs that have shown up around Anchorage in recent years, the person said.

In 2017, a Whole Foods sign popped up on a fence near downtown Anchorage, proclaiming a location was on its way. It wasn’t. When a Starbucks on Minnesota Drive near West Northern Lights Boulevard was under construction in 2017, a fake sign on the fence there indicated that an In-N-Out Burger was coming. Fans of the chain’s animal-style fries were left disappointed.

Others have included a Lego store banner on a vacant lot downtown, and a Trader Joe’s banner on the Northern Lights Hotel before it was demolished.

The person who said their group put the signs up, corresponding via the email address teslamotors@alaska.net, wouldn’t divulge their name. They referred to themselves only as “WFC," and said they’re not a Tesla representative.

They said they put the Tesla sign up late Thursday night, along with two other people.

“Usually we put them up Friday nights, operating under the assumption that the sourpuss that cuts them down is off on weekends,” the person wrote.

The banners get at Alaskans’ desire for national brands that don’t yet have a presence in the Last Frontier, which is often a later stop for big-name retailers as they expand around the country.

So, why put the signs up?

“We do it for a couple reasons,” the person wrote. “1. We find it hilarious. 2. It draws attention to more unsightly or otherwise neglected parts of the city."

Tesla did not respond to an email with questions about the sign by the time this story published. In February, the company announced it would close many of its stores and shift to online sales. Then, earlier this month, Tesla said in a statement it would “keep significantly more stores open than previously announced.”

The sign is at 720 E. Ninth Ave, a former car dealership space that is currently empty. The property has been up for lease for about six to eight months, said Rick Morrison, who owns the building.

"I would assume it’s a prank,” he said Tuesday. Other than his son-in-law calling him a few days ago and asking about the sign, he doesn’t know anything about it or who put it there.

“Nobody’s talked to us” about the sign, Morrison said.

The property is listed with Jack White Commercial real estate. Nancy Johnson, an assistant there, said her office also didn’t know who put the sign up.

There are plans for another sign, the person who wouldn’t give their name said via email. That one will be downtown, they said, but they wouldn’t say which business it’s for.

The person has had “the occasional accusation of vandalism," they said, adding that the group is careful never to deface any property. The person also has decided “not to respond to any email inquiries directed at Tesla,” they said.

“I have a canned 3-4 paragraph response I had planned on sending out,” the person said, adding that they sent it out once.

The signs cost about $130 each with expedited shipping, the person said, adding that they’ve made so many signs now that they get a discount.

“The company I get them from has started offering larger sizes and I have been considering it ... those run about $390,” the person said.