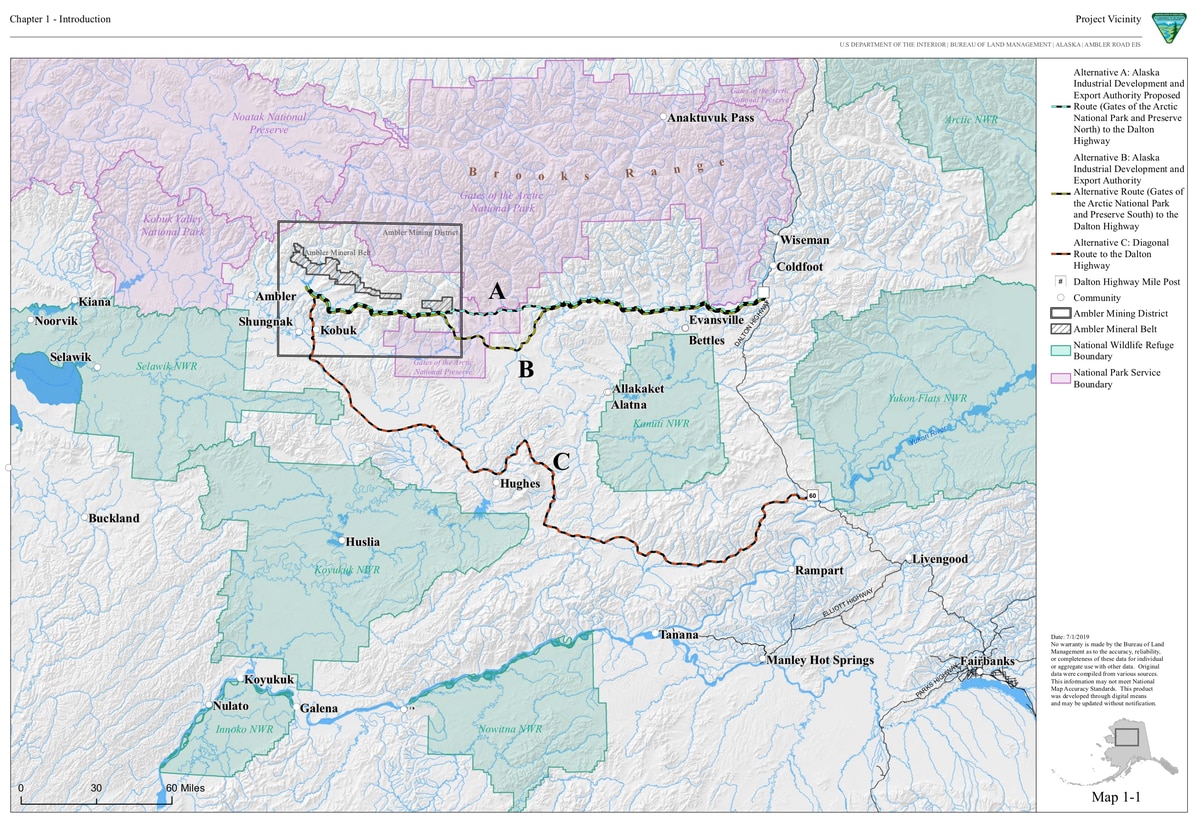 A state proposal to cut a roughly 200-mile mining road through the Northwest Alaska wilderness came under frequent fire at a hearing in Anchorage on Tuesday that launched a series of public meetings statewide.

Hunters condemned the proposed Ambler Road because it would be closed to the public. Conservationists said it would hurt caribou and other wildlife needed by villages in the region.

Close to 20 people spoke against the road. A few people expressed support, saying it would create jobs and state revenue.

The event, organized by the Bureau of Land Management, was the first of 22 public meetings over the next month in Alaska and Washington, D.C. Many of the meetings will be held in villages that could see significant impacts to subsistence hunting, the agency said.

The long-discussed project would link Alaska’s skeletal road system north of Fairbanks to the mineral-rich Ambler Mining District, ending near Ambler and other villages.

The Alaska Industrial Development and Export Authority, a state agency promoting economic development, applied with the BLM for a 50-year right of way across federal lands. The Ambler district is home to one of the world’s largest undeveloped copper-zinc mineral belts, according to AIDEA’s project web site.

The BLM recently released a draft environmental report that says the two-lane gravel road will cost at least $500 million, though opponents said the costs would be much higher. The report is a first for the road after the state began studying it a decade ago.

AIDEA funds and bonds could be combined with private investments to pay for the road, with the costs of construction paid back with road tolls as mining companies haul minerals to market, the state agency says. AIDEA used that plan successfully for a road to the Red Dog Mine in Northwest Alaska, one of the world’s largest zinc mines, according to the project web site.

Canadian mining company Trilogy Metals, which holds mineral leases in the region, would be one beneficiary of the Ambler road.

Melvin Grove, president of the Alaska Outdoor Access Alliance, criticized the federal agency’s decision to hold hearings in September while many Alaskans are hunting. The road would cross state lands, not just federal lands, and should be open to the public, he said.

“I’m all for development and mining, nothing against it all,” he said. “But to do this for a select few, and leaving out the rest of Alaskans, I totally oppose it."

The state should “fund the education of our youth, senior benefits" and programs that have been cut, instead of supporting profits for a foreign company, Frankevich said.

These "resources could and should be developed and produced here in Alaska where operations are strictly regulated and best management activities are employed to avoid and minimize impacts,” she said.

Peter Douglas Sr., originally from Ambler and now living in Anchorage, said that if a road is built, it should not be open to the public, to keep out bootleggers and drug smugglers. He’d only support a road that helps villages in the regions with additional revenue and jobs.

“Only for mining and only if it’s going to benefit my people,” he said after the meeting. “A lot are really struggling.”

John Gaedake, who lives seasonally in the region the road would cross, at his family’s wilderness lodge, said AIDEA has spent many millions of dollars studying a “private driveway” without any certainty that mining companies will pay the costs back.

Karsten Rodvik, a spokesman for AIDEA, said after the hearing that the agency would not help pay for the road without a commitment from mining companies that they will repay costs.

The agency has said a scenario involving operations at four potential mining sites could support thousands of jobs. It would about $1.1 billion in state revenues over the life of the mines, from mining license tax revenues, mineral royalties and corporate income taxes.

“We are in the permitting phase. We are not going to build the road until there is a commitment in place with the industrial users,” similar to how the road to the Red Dog mine was built, Rodvik said.

“When the bulldozers are ready, that’s when there’s got to be a financial plan and commitments in place,” he said.