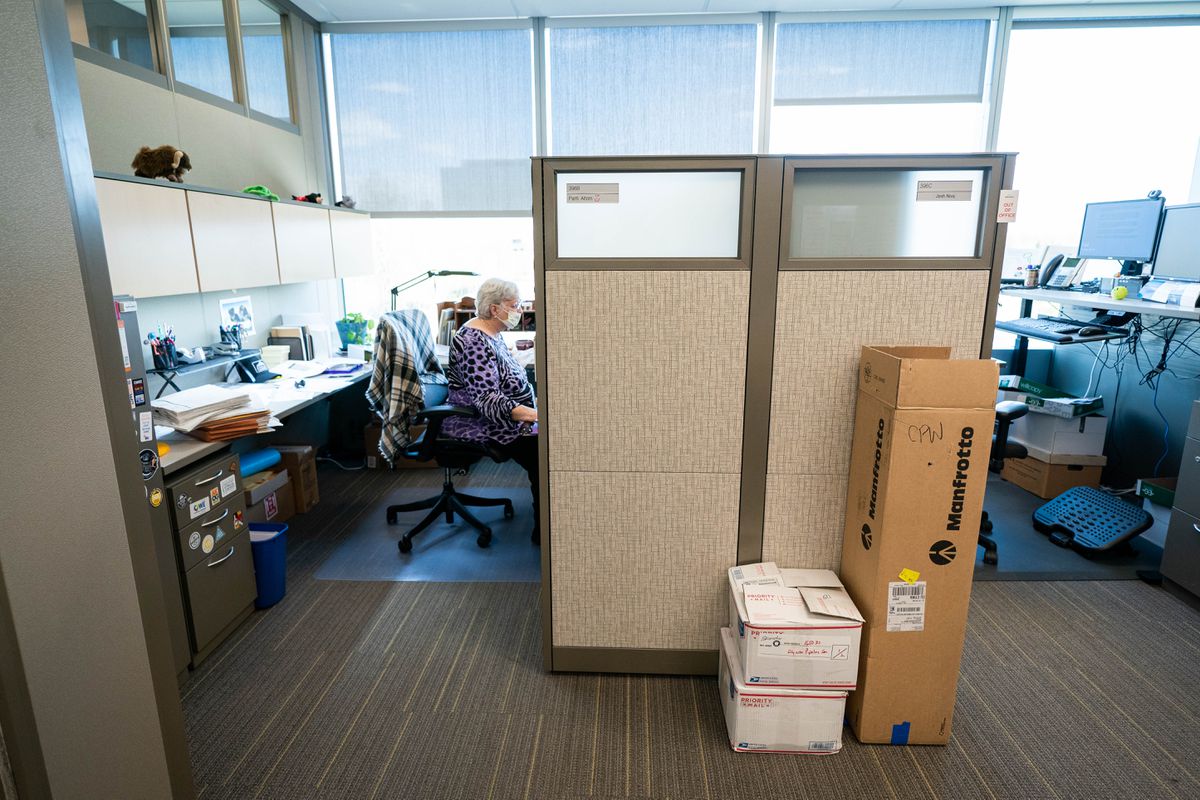 Patti Altom works in a mostly empty office at Alyeska Pipeline Service Company on Thursday, May 14, 2020 in Anchorage. The company is allowing, but not requiring, up to 33% of their office workers to return to work in the building. (Loren Holmes / ADN)

Patti Altom works in a mostly empty office at Alyeska Pipeline Service Company on Thursday, May 14, 2020 in Anchorage. The company is allowing, but not requiring, up to 33% of their office workers to return to work in the building. (Loren Holmes / ADN)

As COVID-19-related restrictions are eased, companies in Alaska are beginning to discuss how workers can return to office buildings.

On May 8, Gov. Mike Dunleavy lifted a state mandate and allowed nonpublic workplaces like office buildings to bring employees back.

But doing so is a challenge: How do you gain the benefits of a community workspace while avoiding close contact that could put employees at risk of the coronavirus? For some businesses, it could be as simple as masks, spreading out desks and leaving the communal coffee pot turned off. But for others, the transition back to a normal work setting is shaping up to be a long, arduous process.

Handyside said GCI is currently surveying employees to gauge their comfort level on returning to the office, as well as figuring out what the benefits of a home office have been. Many employees say they’ve been very productive at home, she said.

However, many felt the move to home was abrupt, and they miss being around coworkers, she said.

Handyside said long-term office employees could have the option to work from home more than they did before, or potentially in smaller work spaces distributed around the city rather than in a large building.

“Now that the employees are working from home, we really want to be thoughtful about bringing them back,” Handyside said.

[US, European leaders weigh reopening risks without a vaccine]

Like GCI, Alyeska Pipeline Service Co. has a large office staff that was sent home due to the pandemic. Last week, supervisors returned to the office and were tasked with finding out how employees can safely come back.

It was the first in a five-step process, spokeswoman Michelle Egan said. Supervisors talked to subordinates to see who wants to return and who would rather stay at home.

In addition to working out the logistics, such as moving desks apart, instituting more rigorous cleaning policies and making sure employees have masks and hand sanitizer, as laid out in state guidelines, companies are also considering employees’ vast range of comfort levels and circumstances at home.

Some might be scared to go into the workplace, or are worried about infecting an immunocompromised loved one. Others may be stir-crazy after two months of quarantine and are anxious to get back into a communal setting.

“Everyone’s circumstances are different,” Egan said. "There are people that have health issues, or maybe family members they are concerned about, so they have reservations.”

Eventually, she said, the plan is to get a third of the workforce back into the office. If more than a third want to come back, the company will likely put in place alternate schedules where people rotate days in the office.

“It’s more of an invitation to return, with these restrictions, and a cap on the number of people we are comfortable having in the workplace,” Egan said.

Ke Mell, a project manager for the University of Alaska Southeast in Juneau, is awaiting that invitation.

“If I could go back to work now, I would," she said Friday.

Mell started working from home March 25. Logistically, it’s been fine. She occasionally goes to the office to print or scan something, but otherwise has everything she needs at home.

Mell, 62, said while the quality of her work isn’t suffering, her quality of life is.

Even for someone who doesn’t describe herself as social, it’s taken a toll, she said. The video conference meetings are just not as satisfying as face-to-face interactions.

“I do find it extremely isolating, because the contact I used to have is essentially gone,” she said.

Sheri Buretta, interim CEO for Chugach Alaska Corp., said the Alaska Native corporation is taking a very cautious approach to moving people back into the workplace. Formal discussions have been happening for months, but there is no date to transition workers back.

She said the situation is different for each employee: Some want to work from home permanently, while others don’t have a good home office setup and want to get back into the office.

Despite all that, she said, the transition has gone well. Recently, they had 300 workers on a call.

“It’s fascinating, the shift we’ve been able to make," she said.

She said Chugach also is open to making permanent changes, such as implementing more video conferencing or allowing people to work more from home.

There has been some tension in Alaska over working in an office during the pandemic. Alaska’s largest public-employee union sued the state in March, alleging it was failing to properly protect workers, in part by having them stay in the office. A Superior Court judge sided with the state, which argued that the workers were providing essential services.

Several private companies told the Daily News that they are luckily afforded flexibility in deciding when and how to bring workers back into the office.

Oil company ConocoPhillips is also going with a phased plan for its Anchorage office, said spokeswoman Natalie Lowman. A team started working on the plan in late April, when emergency orders started to be lifted.

The first phase started Monday with 25% of the workforce coming back to the office. The second phase will bring 50% and the third phase will see all employees return. There are no dates set for the final two phases.

“In making the decision about which employees return to work, we will be flexible and consider the lack of child care facilities, employees who may be at high risk or who live with family members who are at high risk, and other factors which are unique to today’s environment,” Lowman said.

Alex Hofeling, general manager of TOTE Maritime Alaska, said the company is just starting to discuss bringing employees back to the office and is in no rush. Working from home has its challenges, he said, but the company has been able to keep up production.

“We’re in a good place as far as barriers,” he said. "We can move at our own speed.”

Hofeling said TOTE is leaning on guidelines from the World Health Organization and the U.S. Centers for Disease Control and Prevention in deciding how to bring people back in, but he doesn’t know what that will look like. It could involve more options to work outside of the office long-term.

“I don’t know if we will ever get back to exactly the way it was before, but certainly there is a camaraderie and culture that forms with people working close together,” he said.