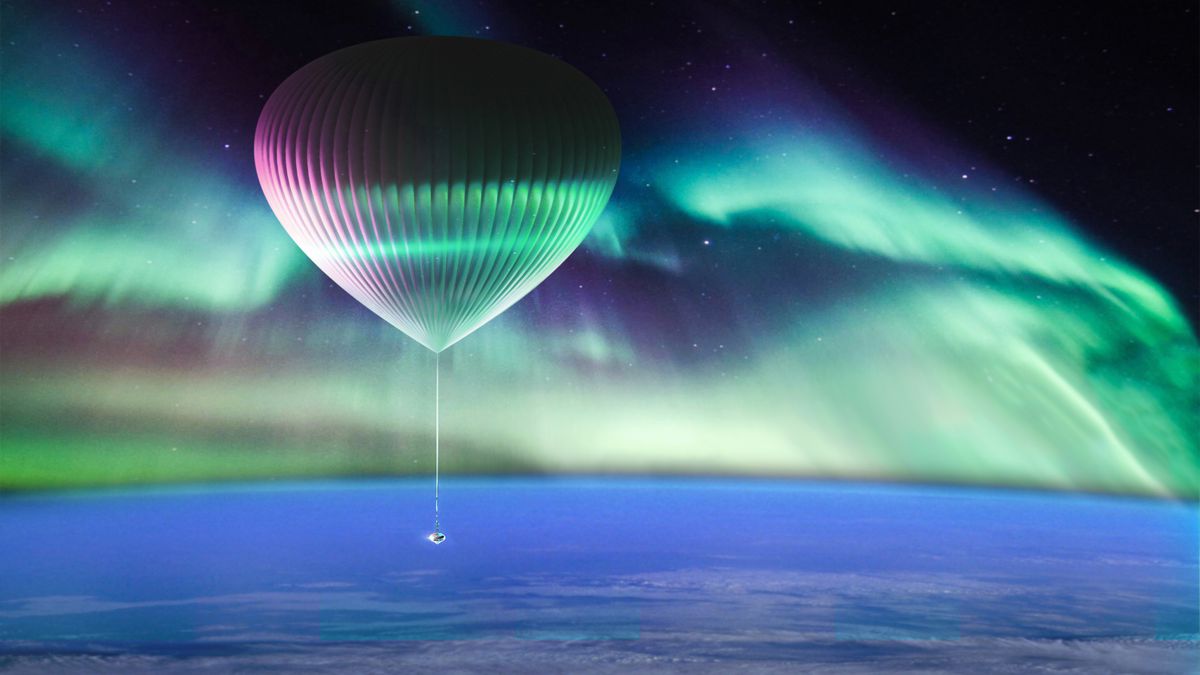 An artist rendering of the Space Perspective Neptune spacecraft viewing the northern lights from the edge of space. (Image courtesy of Alaska Aerospace and Space)

An artist rendering of the Space Perspective Neptune spacecraft viewing the northern lights from the edge of space. (Image courtesy of Alaska Aerospace and Space)

Alaska’s aerospace agency has lined up its first client, which aims to carry passengers from Kodiak to the lofty edge of space.

Florida-based startup Space Perspective plans to provide rides with eight passengers and a flight crew in a pressurized capsule suspended beneath a hydrogen-filled balloon the size of a football stadium, the firm announced last week.

The company said it plans for the Pacific Spaceport Complex in Kodiak to serve as one of the launch sites for the vehicle, called the Spaceship Neptune.

Mark Lester, CEO of Alaska Aerospace Corp., said the high-altitude rides will be available from Kodiak in a few years. Each passenger could pay an estimated $125,000 for a six-hour journey.

The opportunity will support tourism in Alaska among other economic benefits, Lester said.

“You will have people from around the world who want to come to Alaska and see the northern lights from the edge of space,” he said. “It will be an exciting, once-in-a-lifetime thing.”

Next year, Space Perspective plans to complete an unmanned test flight from the Shuttle Landing Facility at NASA’s Kennedy Space Center in Florida.

Once passengers can board the flights, they will start with a two-hour ascent, ending about 19 miles above Earth. There, they can post about their experience on social media or send data, the company said.

The vehicle is intended to provide the only “near-zero emissions” path to the doorstep of space, Alaska Aerospace Corp. said.

“Neptune then makes a two-hour descent under the balloon and splashes down, where a ship retrieves the passengers” along with the capsule and balloon, the company said.

In Alaska, the “post-flight capsule recovery” would occur in the waters around Kodiak Island and the Aleutian Island chain, depending upon the seasonal wind patterns, the aerospace agency said.

Leaders of Space Perspective have experience with balloon flights.

“They did the StratEx flight in 2014 that took Google executive Alan Eustace to 136,000 feet under a balloon to break the world record for the highest balloon flight and spacedive,” the company said in an email. “They also founded World View Enterprises that uses stratospheric balloons for remote sensing and communications.”

An artist’s rendering of the capsule shows it looks like a giant Christmas ornament. The balloon design is derived from technology that NASA has used for decades for flying large research telescopes, the company said.

Space Perspective co-founders Jane Poynter and Taber MacCallum once lived inside and designed air, food and water systems for Biosphere 2, a prototype space base and research facility in Arizona, the company’s website says.

“We’re committed to fundamentally changing the way people have access to space — both to perform much-needed research to benefit life on Earth and to affect how we view and connect with our planet,” Poynter said.

The venture and plans are not pipe dreams, Lester said.

“Having a bigger capsule like the Spaceship Neptune is still to be developed,” Lester said.

But the technology is there.

“This is development of a capability they have already demonstrated,” he said.

Alaska Aerospace and Space Perspective will work together to test and refine spaceport operations and secure spaceflight licenses from the Federal Aviation Administration, the agency said.