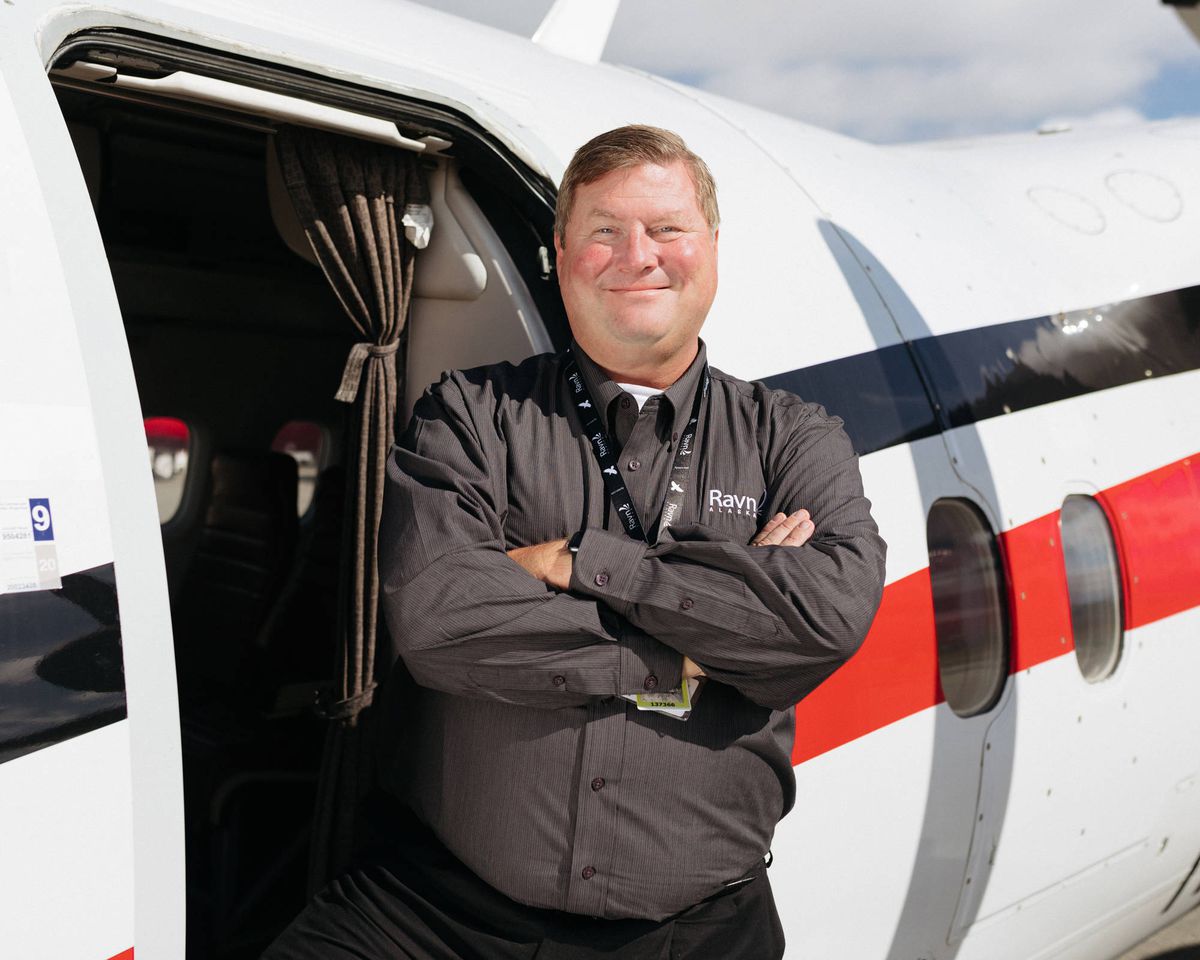 Rob McKinney, the new CEO of Ravn Alaska, is a pilot with experience working in Alaska. He said in an interview that customer service and safety will be the top priorities as the carrier works to restart operations after the previous owners filed for bankruptcy and suspended service in April. (Photo courtesy Ravn Alaska)

Rob McKinney, the new CEO of Ravn Alaska, is a pilot with experience working in Alaska. He said in an interview that customer service and safety will be the top priorities as the carrier works to restart operations after the previous owners filed for bankruptcy and suspended service in April. (Photo courtesy Ravn Alaska)

The new leadership team at Ravn Alaska is hopeful scheduled service to many of the hub communities the grounded airline used to serve can resume in mid-September with a renewed focus on customer service.

Ravn Alaska CEO Rob McKinney said in an Aug. 18 interview that there is no set return-to-service date because the approximately $9.5 million bankruptcy asset sale closed Aug. 8, meaning the group could not dive into what it had earlier agreed to purchase until then.

Restarting the Part 121 business — scheduled service with large aircraft — will require mechanical inspections that became due for several aircraft over the five-month period after it stopped flying; it was by far the largest passenger airline based in Alaska and Ravn’s people will be taking refresher courses before getting back in the air as well, according to McKinney.

“Virtually every flight crew is being sent back to training, so everyone’s going to be going to flight safety. All of the flight attendants are going to train from scratch just because of the length of time (since Ravn suspended operations),” McKinney said. “We just want to make sure we err on the side of being conservative.”

Ravn Air Group Inc. filed for Chapter 11 protection in Delaware Federal Bankruptcy Court April 5, three days after grounding its fleet of 72 regional and commuter aircraft. Airline leaders said at the time they were forced to shutter following a roughly 90 percent drop in passenger demand at the outset of the coronavirus pandemic.

Before closing, Ravn employed approximately 1,300 people and served 115 communities across the state. McKinney said Ravn will need about 400 employees when it starts flying. The Anchorage-based carrier is actively recruiting both former and new employees on its website.

Having purchased the Federal Aviation Administration Part 121 flight certificates for both Ravn and Penair, which was purchased out of bankruptcy by Ravn in 2018, McKinney’s group also acquired the associated Ravn-branded aircraft: nine De Havilland Dash-8s.

He said service will be added over several weeks after it initially starts and the plan is to eventually operate in all of the hub communities Ravn previously served with the exception of Kodiak and Kotzebue — also served by Alaska Airlines — at least for the first year.

“We’re not going to be able to roll out 14 cities on Day 1, but by the end of week three or so we hope to be over 10 cities that we’re service and be back to probably all 16 cities within six weeks or so,” McKinney said.

Ravn won’t be refunding previously booked tickets for unfulfilled flights but passengers can re-book the reservations for future flights as they become available.

Unalaska and St. Paul are the “top two” communities on Ravn’s list to serve first primarily because their remote locations mean limited transportation options, he added.

Last October, a Penair Saab 2000 aircraft operated by Ravn Air Group skidded off the end of the runway at Unalaska, killing one passenger. Ravn immediately suspended service to Unalaska, which left the major fishing hub without scheduled flight service.

The company resumed service after nearly a month on Nov. 14 with the smaller Dash-8 aircraft after experts’ preliminary conclusions that the Saab 2000 overshot the 4,500-foot runway while attempting to land in a swirling tailwind. The pilot also had relatively little experience in the Saab 2000, according to an initial National Transportation Safety Board report on the crash.

McKinney noted that Ravn will be flying its Dash-8s to Unalaska when it resumes service.

McKinney was part of the group that started Float (Fly Over All Traffic) Shuttle, a Southern California air taxi largely focused on serving Los Angeles and San Diego-area commuters. When state and local coronavirus travel restrictions forced Float to suspend operations, the group began searching for opportunities amidst the most severe downturn in the history of the passenger airline industry and quickly focused its attention on Ravn because of prior time in Alaska, he said.

Both McKinney and new Ravn Chief Commercial Officer Dan Kitchens had worked in Alaska aviation before; McKinney for a Southeast carrier and Kitchens for multiple operators in the state, including Ravn.

“As soon as we saw in April that they filed for bankruptcy we went to pursue this because we just knew from our experience what an opportunity it was. We knew how much the communities depended on the service to connect them to the city and medical and shopping as well as the rest of the world. We felt that of every airline in the country, Ravn had the best opportunity because so much of the business is freight and people really have to travel regardless of whatever happens to be going on in the world,” he said.

While in the process of permanently relocating to Anchorage, McKinney, who has flown extensively as a commuter pilot and managed flight operations for several carriers, offered a common refrain as to why he has come to favor his work in the city over his prior time in Alaska: “Southeast…it rains a lot,” he said.

Getting enough people to fly with Ravn again will also require repairing an image that is damaged in many communities. Increasingly unreliable service from Ravn often accompanied with multi-day waits following non-weather-related cancellations in the year-and-a-half after purchasing Penair pushed residents in Bristol Bay-area communities to petition for year-round service from Alaska Airlines, which the major carrier started this summer.

Ravn said in statements issued last year that airline leaders reduced scheduled flights in an attempt to right-size the Bristol Bay market specifically following the acquisition of Penair, a former competitor, which at times resulted in more demand than available seats.

McKinney acknowledged that a question from the Journal regarding the perception of Ravn statewide was one of many he has received in the same vein.

However, he doesn’t believe it would be a worthy investment to rebrand the airline.

“I think that’s just needlessly spending money painting airplanes and changing out signs when really people know it’s the same company. They’re going to see a lot of maybe the same employees, but I tell you what — when you come in here with a new message to the employees that customer service is the most important thing and — and I think that if we’re transparent and we publish our completion stats and our on-time performance, I think over time people will see that it’s a new Ravn and we really do care about the customers that we serve,” McKinney said.

“It’s not just about doing what hits the bottom the best, but actually making sure that we’re taking care of our customers as best we possibly can and that will pay us dividends in the long-run.”

Ravn’s new leaders conducted detailed modeling to determine what business outcomes will be necessary to be successful, but the airline will also be aided greatly by its ownership structure of one, according to McKinney. California entrepreneur Josh Jones is the airlines’ sole investor and he will be patient as Ravn rebuilds its operations, McKinney said.

“(Jones) is not a private equity guy. He’s done well for himself. He’s been an incubator of other businesses and started and sold several businesses of his own but just a really, really sharp guy and he saw an opportunity here and saw the vision that we have, so yeah, we have to keep one guy happy, which makes life a lot easier,” McKinney said, adding that Jones wants Ravn to offer free wi-fi at all of its facilities.

“He’s very, very customer service driven and believes strongly that if we take care of our customers they will take care of us.”

Ravn’s prior majority owners were the New York-based investment firms W Capital Partners and J. F. Lehman and Co., according to bankruptcy filings.

Attempts to reach Jones in time for publishing of this article were unsuccessful.

“We really are a different Ravn; same planes and the same paint but we have such a different attitude towards the people that we serve,” McKinney said. “We truly care about the communities and we want to be a part of their lives that they can depend on.”