The Trump administration repealed the ‘Roadless Rule’ for Alaska’s Tongass forest. What’s next? 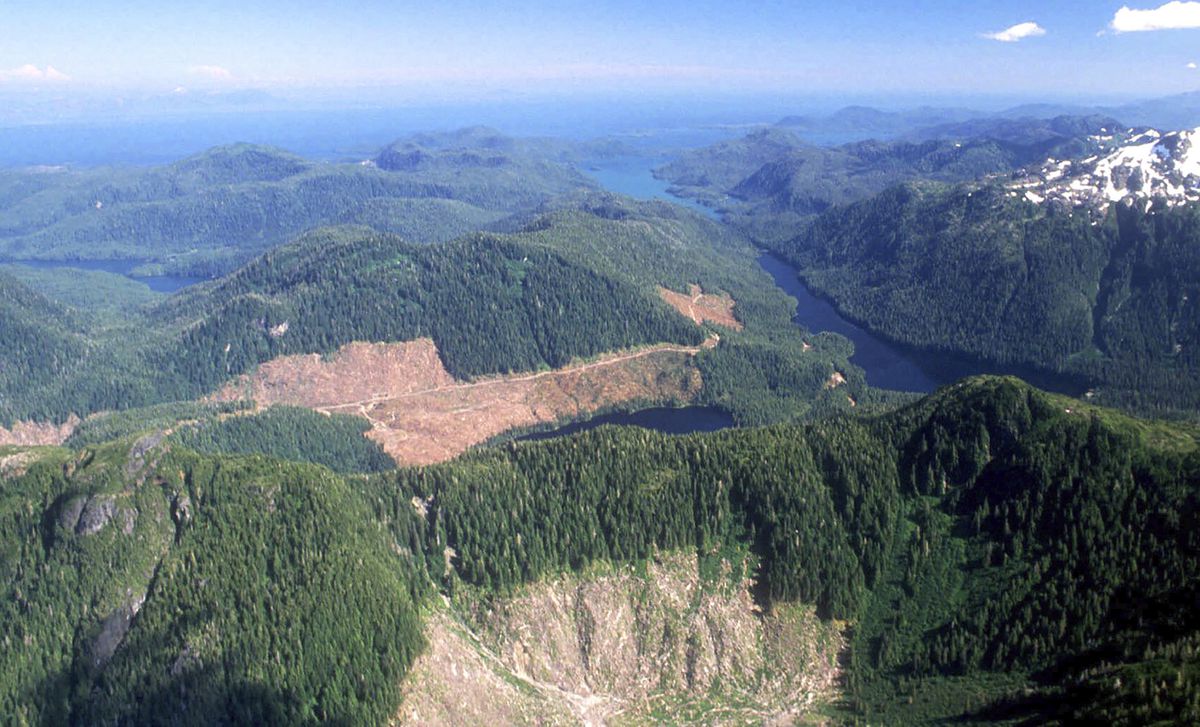 FILE - This 1990 aerial file photo, shows a section of the Tongass National Forest in Alaska that has patches of bare land where clear-cutting has occurred. The U.S. Forest Service announced plans Wednesday, Oct. 28, 2020, to lift restrictions on road building and logging in most of Tongass National Forest, a largely pristine rainforest in Southeast Alaska that provides habitat for wolves, bears and salmon. Conservation groups vowed to fight the decision. (Hall Anderson/Ketchikan Daily News via AP, File)

FILE - This 1990 aerial file photo, shows a section of the Tongass National Forest in Alaska that has patches of bare land where clear-cutting has occurred. The U.S. Forest Service announced plans Wednesday, Oct. 28, 2020, to lift restrictions on road building and logging in most of Tongass National Forest, a largely pristine rainforest in Southeast Alaska that provides habitat for wolves, bears and salmon. Conservation groups vowed to fight the decision. (Hall Anderson/Ketchikan Daily News via AP, File)

The Roadless Rule survived nearly 20 years of legal challenges in Alaska but not the Trump administration.

U.S. Department of Agriculture officials published a new regulatory framework for Southeast Alaska’s Tongass National Forest in the Federal Register Oct. 29 that exempts the massive forest from the national rule established during the final days of the Clinton administration in early 2001.

The Roadless Area Conservation Rule, which originally prohibited new roads across roughly 58 million acres of forestland nationwide, largely put a stop to new infrastructure across approximately 9.4 million acres of the Tongass. At about 17 million acres, the Tongass is by far the largest national forest in the country.

The basic conservation versus development debate surrounding the oft-contentious Roadless Rule is as old as public lands, but what really happens next?

According to many proponents of the repeal, actually very little. That’s because lifting the development impediments imposed by the Roadless Rule is about far more than restoring Southeast’s now niche timber industry to its glory years, they say.

Sen. Lisa Murkowski, who chairs the Senate Energy and Natural Resources Committee until the new Congress convenes in January said in a joint statement from the Alaska delegation that the repeal of the Roadless Rule improves the ability to develop lower cost energy sources and public infrastructure for the region’s 35 mostly isolated communities.

“A full exemption from the Roadless Rule means access to more affordable and renewable energy to power homes and schools, access to technology at a time when more Americans are logging online for health care and education, and access for transportation and recreation jobs and economic activity in the region — all while ensuring continued good stewardship of our lands and waters,” Murkowski said.

Robert Venables, executive director of the Southeast Conference, a regional development group that has supported revising the Roadless Rule also wrote via email that energy projects — which often means hydropower in the Tongass — stand a better chance of being developed in the future and mineral exploration could continue to increase with easier access under the new Forest Service rules, but he stressed there is no money in the agency’s budget to suddenly start building roads.

“There is no master plan or pent-up project list ready to explode its way through the old-growth forest,” Venables wrote.

However, he also stressed a belief that the primary reason for the lack of ready community development projects is the inability of regional leaders to set long-term plans while the legal battles over the Roadless Rule have played out.

“The uncertainty with the Roadless Rule has been a debilitating factor for the last 20 years and I do not see that ending unless the courts put a stop to it — the political revolving door will keep it in play as long as there are elections,” Venables wrote.

The Alaska exemption from the Roadless Rule is specific to the Tongass, meaning the rule remains in place over the 5.5 million-acre Chugach National Forest in Southcentral where historical timber harvests have been minor.

The State of Alaska first secured an exemption from the Roadless Rule for the Tongass as part of a 2003 court settlement to a lawsuit over the rule’s applicability in the state with the Bush administration but that exemption was overturned by a Federal District Court of Alaska judge in 2011. Subsequent appeals and other attempts by the state and resource development groups to have the Roadless Rule invalidated proved fruitless.

Timber industry advocates also contend that even the complete exemption will not enable the widespread clear-cutting of old-growth stands that many Roadless backers fear in part because the forest-level land-use plan doesn’t call for it.

The Tongass Land and Resource Management Plan finalized in 2016 by the Forest Service allows for roughly 188,000 acres of timber to be harvested across the Tongass without the Roadless Rule, according to the record of decision.

A 2019 Alaska Forest Association analysis of the impact of repealing the rule on the available timber supply commissioned by the State of Alaska determined about 165,000 of those newly harvestable acres would consist of old-growth stands.

“No matter the (exemption) alternative selected in the record of decision for the ‘Rulemaking for Alaska Roadless Areas’ at least 82 out of every 100 acres of suitable old-growth forest within the Tongass National Forest will not be available to maintain the existing timber industry through transition (to completely young-growth harvests),” the AFA analysis states.

As a result, AFA leaders have pressed the Forest Service to also start the lengthy public process to again revise the Tongass Management Plan.

Southeast Alaska Conservation Coalition Tongass Program Manager Dan Cannon said in an interview that the group expects the Forest Service to start planning timber sales in previously roadless areas soon, particularly if President Donald Trump wins reelection, and the commercial fishing, eco-tourism and other industries that benefit from intact forestlands will have to adapt.

“The true economy (of Southeast) is really going to have to pay attention and navigate the potential impacts” of additional logging and development, Cannon said.

Roadless Rule supporters regularly note that tourism and fishing have provided about one-quarter of the region’s jobs in recent years, while the timber industry — more than 4,000 workers strong at its peak — now accounts for less than 1 percent of current Southeast jobs, according to Southeast Conference data.

Cannon also dismissed the notion that doing away with the Roadless Rule is necessary to facilitate public infrastructure projects that would otherwise be noncontroversial, pointing to Forest Service exemption decision documents that state the agency approved nearly 60 projects in Roadless-designated areas over the years.

“There’s a lot of talk about it being a problem and that’s not the reality,” he said. “The Roadless Rule was well-designed and you can see that by the exceptions that have been made.”

Timber harvesters and project developers emphasize that while the rule did not explicitly prohibit activity in roadless areas, it ostensibly did by requiring more complex logistics, transportation and added time to project construction.

According to Cannon, compromises were made in the 2016 Tongass Management Plan approved under the Obama administration after stakeholder input. The plan calls for a faster transition to young-growth timber harvests than industry leaders say is practical.

The Southeast Alaska Conservation Coalition is among the groups contemplating litigation to reverse the Tongass-specific repeal of the Roadless Rule, Cannon said.

“We will do whatever we need to reinstate the protections of the Roadless Rule,” he said.

According to Venables, the sudden swings of full repeal or fully Roadless make it difficult to reach a consensus that everyone could plan around. He was also part of a working group formed by former Gov. Bill Walker’s administration to draft recommendations for crafting an Alaska-specific Roadless Rule, though the USDA indicated early in the process it intended to move forward with a full repeal.

“The Tongass Forest Plan, along with other conservation measures, will continue to guide management decisions, allowing roadless area values to play a role on the Tongass while offering additional flexibility to achieve other multiple-use benefits,” Anderson wrote in an email.

She added that the agency currently has no plans to revise the Tongass Land Management Plan.