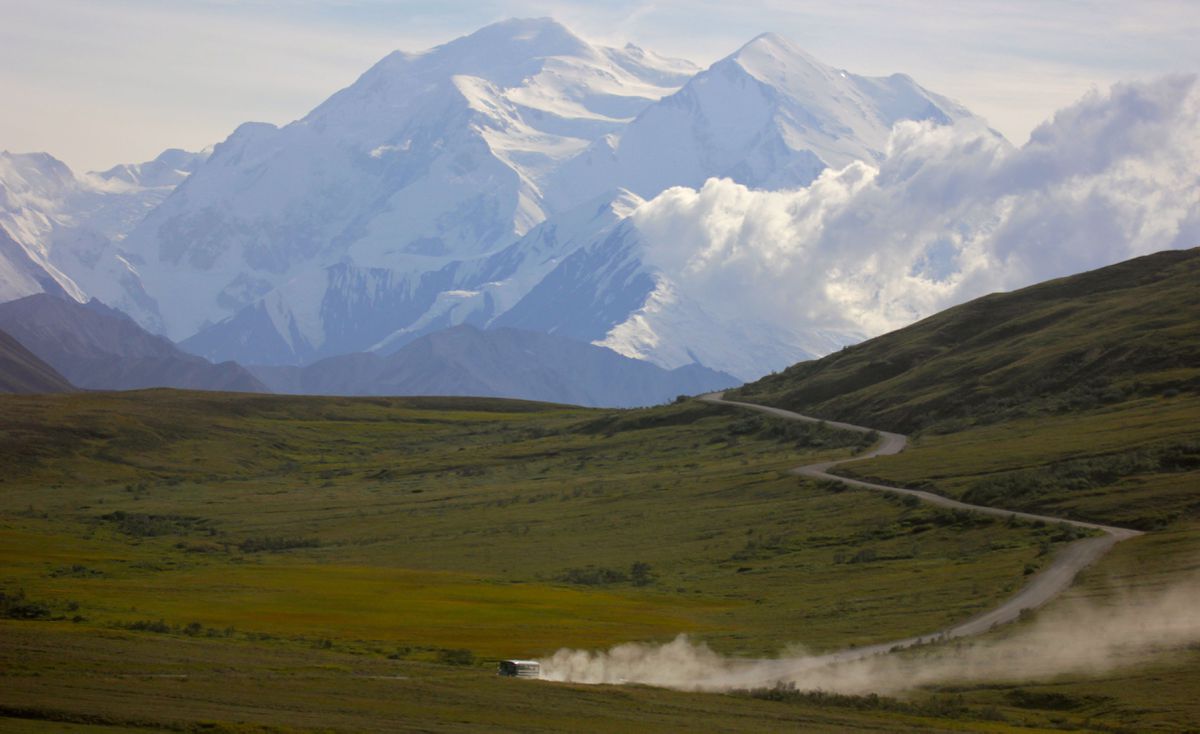 A tour bus kicks up dust during a sunny day at Denali National Park in Alaska as Denali appears in the background in 2013. (AP Photo/Manuel Valdes)

A tour bus kicks up dust during a sunny day at Denali National Park in Alaska as Denali appears in the background in 2013. (AP Photo/Manuel Valdes)

At the start of last week, Kyle Davis had been looking forward to summer and planning to hire as many as 50 workers for his tourism business outside Denali National Park.

He operates Denali Park Adventures, running Jeep tours down the Denali Highway, ATV tours in the backcountry, and zip line trips through the forest.

On Thursday, he started revising his plans.

Earlier that day, Canada’s government announced it will ban all cruise ship travel in Canadian waters through February 2022. That ban, combined with an American law, will effectively cancel most of Alaska’s cruise ship season for a second straight year.

Alaska’s congressional delegation and members of the state Legislature have said they will try to fix the problem, but similar efforts last year were unsuccessful.

More tourists arrive by cruise ship in Alaska than by any other means. This year, the expectation had been for something better than 2020, but the Canada decision, coupled with a separate ban on cross-border land access, will block hopes for a rebound.

Instead of 50 employees, Davis is now planning to hire around 30 to 35. Other businesses are making similar moves as employers lower their already lean expectations.

“Just based on what I think now and what happened last year, it’s going to be devastating, not only for the Denali area, but for Alaska as a whole,” Davis said.

Many said they do not expect summer tourism to be as slow as it was in 2020. COVID-19 vaccination rates are growing, and there’s hope among some that independent travelers in large numbers may still come to Alaska by air.

But interviews this week with people directly involved or familiar with the tourism economy say they fear whatever upsides exist will be outweighed by another overall lean summer. In a letter to the Alaska Legislature, Daryl and Tara Frisbie wrote that they have drained their life savings to support their business, the Denali Lakeview Inn, “and are now hanging on by a thread.”

“If travel mandates continue and visitors are deterred from coming to Alaska, we will not survive,” they said.

Suzanne Rust, co-owner of K2 Aviation in Talkeetna and Rust’s Flying Service in Anchorage, which offer flight-seeing tours, said she thinks people will want to travel in the U.S. this summer, opening the door to independent travelers here.

“But we have to think Alaska will be hit hard,” she said.

In Skagway, the Southeast Alaska town of 1,100 people with a heavy summer cruise-ship presence, Mayor Andrew Cremata said that since Thursday’s announcement, he’s been contacted by multiple people who have said they now intend to leave. The town’s largest employer, the tourist-oriented White Pass and Yukon Route Railroad, laid off 27 workers, he said.

The railroad’s executive director, Tyler Rose, declined to confirm the layoffs but said, “the economic impact of this pandemic has had devastating effects on our business as well as all of Skagway. We are doing what we must to survive.”

“Skagway is at risk of ceasing to exist as everyone knows it,” Cremata said.

“This is the oldest incorporated city in Alaska. We need help, and we need it now,” he said.

“It seems unlikely 2021 will be as bad, given how bad the shock in 2020 was, but this is very bad news,” said Karinne Wiebold, an economist with the Alaska Department of Labor and Workforce Development. “The magnitude of this is still very much to be determined, but it’s going to be a drag on unemployment growth.”

Leisure and hospitality has already been Alaska’s hardest-hit economic sector during the pandemic, losing about 10,000 jobs, or 25% of its workforce, between 2019 and 2020, the state labor department reported.

The lack of cruise ship visits last summer was a big factor in those losses and another season could add to the pain, experts said.

Kevin Berry, an assistant professor of economics at the University of Alaska Anchorage, said a second canceled cruise ship season would be “catastrophic” for tourism-related businesses.

“Do they need to get hit again?” Berry said.

Bars and restaurants have already gone through one summer without tourists, plus pandemic-related restrictions on businesses, as well as customers who stayed home to avoid catching the virus.

“I was sick to my stomach when I heard it,” said Paul Thomas, chairman of the board for Alaska CHARR, a trade group representing hotels, restaurants, package stores and bars.

“The restaurants, the bars … they’re all going to all see it in a just sledgehammer-type impact,” he said.

Laile Fairbairn with Locally Grown Restaurants, managing four Anchorage restaurants, said the businesses were holding their breath in hopes that tourism would improve sharply this summer.

“But the payoff won’t be the same now, for sure,” she said.

Cruise ship travelers often stay at downtown hotels, and companies that provide services to downtown restaurants and hotels will also be hurt, she said.

“It will have a devastating impact,” she said. “My small restaurants will tighten their belts and invite locals in as much as we can. But we won’t as busy and neither will the hotels, and that has a big ripple (effect) throughout the city.”

In most Southeast Alaska cruise ship towns, ships pull directly into downtown districts. Thomas lives in Juneau, which in 2019 saw 1.3 million cruise passengers — a huge volume for a city with fewer than 32,000 year-round residents.

He speculated that for members of his trade group, the ban will represent a “50-plus percent” drop in revenue.

He fears that the impact will be worse for tour operators, some of whom lost 100% of their revenue last year.

“I’m really afraid that a lot of those guys, if we don’t see a change to this Canadian plan or some kind of fix to it … I don’t think we’re going to see them around,” he said.

Susan Bell, president of McKinley Research Group, said before the pandemic hit, tourism businesses were expecting record growth in 2020. Small-business owners had invested in planes, boats and other items. Some then were faced with new debt payments but no revenue to pay for it.

A second season with diminished business would be a “double-whammy,” she said.

It’s possible that more leisure travelers arrive by air this year, as the vaccinations expand, she said.

Of 2.2 million summer visitors to Alaska in 2019, 60% arrived by cruise ship, 36% arrived by plane and 4% arrived by highway or ferry from Canada, Bell said.

“I think we’ll see some recovery in the air-travel market as vaccinations roll out, but it will take a long time for full recovery,” she said.

Some of Alaska’s towns are almost entirely dependent upon summer tourism. In Skagway, Mayor Cremata said “everyone here has a seasonal job for the most part,” including himself.

Without those seasonal jobs, there isn’t enough employment to compensate for a high cost of living.

“We’re talking about survival here, so I certainly hope our federal delegation and our representatives here understand the situation,” he said.

In the Denali Borough, the local hotel bed tax pays for local services.

“The bed tax declined over 90%,” Borough Mayor Clay Walker said of last year’s figures. “I don’t know of any other county in the country that had their main revenue source decline over 90%.”

Two years ago, the National Park Service recorded 601,152 people entering the Denali National Park, as measured at Mile 14 on the park road. Last year, the park didn’t open until July 1, and only 54,850 people entered.

Walker and Davis each said they’re worried about cutbacks by the Alaska Railroad, which has tentative plans to reduce its number of weekly passenger trains from 14 per week to two, they said.

Tim Sullivan Jr., a spokesman for the railroad, said nothing has been finalized, but this week’s announcement does hurt.

“It’s going to make a big hit financially. We see upwards of 200,000 passengers that cross our docks in Seward, not to mention all the ones that come through Whittier,” he said.

In 2020, the railroad earned just 8% of its expected passenger income, and even before Thursday’s announcement, it had not been expecting that to significantly improve.

“(A canceled cruise season) will affect every single tourism business in Alaska,” said Julie Saupe, president of Visit Anchorage. “This could be a fatal blow to some businesses, especially coming off the worst year ever.”

In summer, close to half of Anchorage’s overnight leisure travelers are due to cruise ships, she said. But the impacts will be even greater in Southeast communities, with their heavier reliance on the industry, she said.

In 2019, Southeast Alaska fishing charter boats dropped about 107,000 fishing lines into the water, according to figures from the Alaska Department of Fish and Game.

“And last year, because of the cruise ship ban, they saw 48,000 lines used. More than half of their clientele didn’t fish,” said Garrett Lambert, president of the Alaska Charter Association.

Southcentral Alaska saw about a 30% drop in charter fishing, according to Fish and Game estimates.

If that pattern continues in 2021, it creates an existential threat for parts of the charter fishing industry, Lambert said. In general, “you don’t make any profit until the last few weeks of your season,” he said, with 65% to 75% of a business’ clientele needed to cover operating costs for a season.

“They do have a challenging road ahead of them again,” he said.

Saupe said there are “green shoots” of opportunities, though they won’t offset the loss in business from cruise ship customers. There’s pent-up demand for travel, and her group plans to place an even greater emphasis on marketing that can draw independent travelers, she said.

After the news Thursday, travel agents called frequently, saying their cruise ship clients still wanted to experience Alaska and were looking for land-tour packages in the state.

“Our phones blew up yesterday morning with those kinds of calls,” Saupe said. “Not that we can make up the (lost) volume that way, but it’s nice to know there’s still an opportunity to sell.”

Visit Anchorage said it’s working with industry and political leaders to find a solution to the ban, according to a statement on Friday.

Cremata and others said Canada could lift the ban early, or the American federal government could intervene by waiving the U.S. law that was affected by Canada’s action. Alaska’s congressional delegation issued a joint statement saying, in part, that they are “exploring all potential avenues, including changing existing laws, to ensure the cruise industry in Alaska resumes operations as soon as it is safe. We will fight to find a path forward.”

“This is going to be devastating, especially for small communities on the cruise run.”