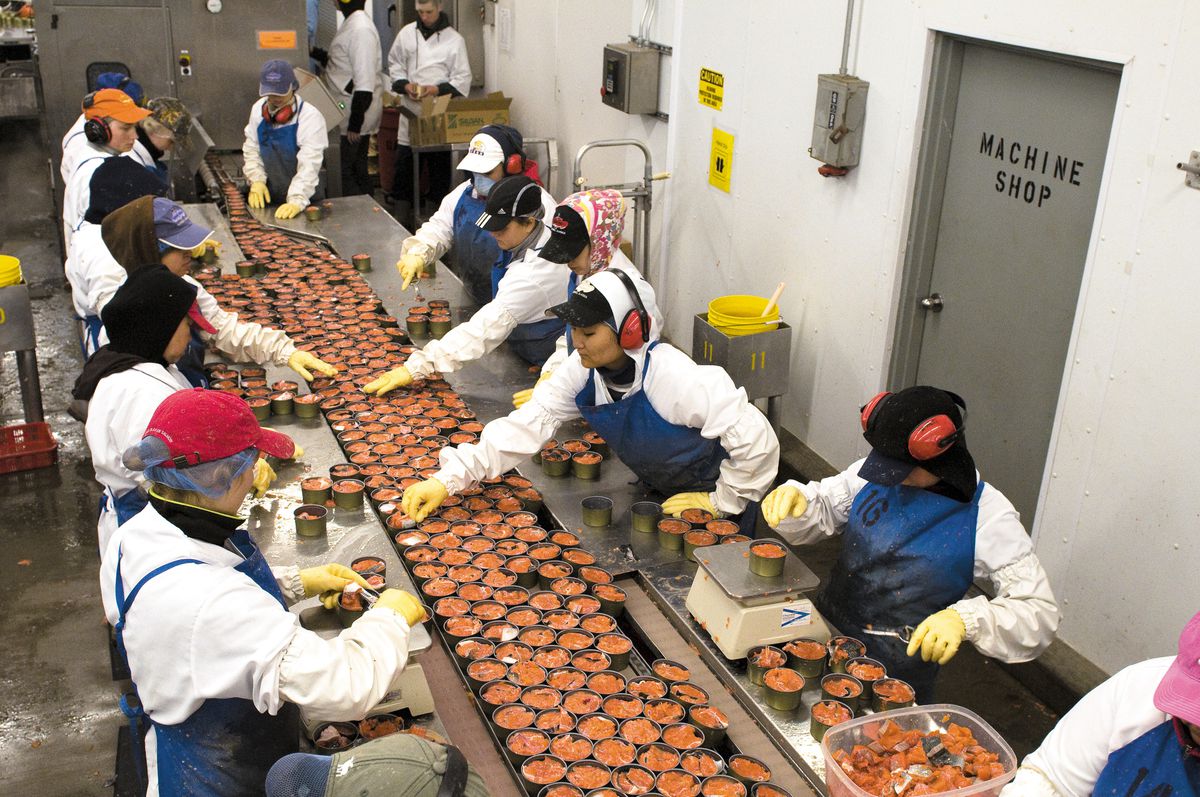 It’s back to the future for Alaska canned salmon as more Americans choose it for its health benefits and as an easy-to-use ingredient for sandwiches, salads and more.

Salmon canning in Alaska started in the 1870s, and by the early 20th century it was the state’s largest industry, generating 80% of the territorial tax revenues. Its position then in the state economy is one that oil enjoys today.

The COVID pandemic has pushed record sales for the pantry shelf product, and canned salmon sales soared by 30.3% in 2020 to $286 million.

“Suddenly, there was double the demand for an item that’s normally very predictable,” said John Daly, manager of domestic canned sales for OBI Seafoods, Alaska’s largest producer of canned pink and sockeye salmon at nine plants across the state. “It’s not like the seafood counter at grocery stores. The canned fish business is the grocery business. It’s a center store aisle item. The best ability is availability, and that was really important because consumers were willing to buy anything and everything that was shelf stable and canned.”

Daly said canned salmon “ticks all the boxes” that people want during the pandemic.

“The conscious consumer is looking for things that are healthy, that are sustainable, that aren’t loaded up with questionable ingredients, they know where the fish comes from,” he explained. “Canned fish is one of the cleanest items in a grocery store. There’s two ingredients on the label, salt and fish.”

Demand was so high it was a challenge last year to keep the retail shelves stocked.

“We only fish for salmon three months out of the year and in March 2020, we were working off the last bit of the 2019 inventory and there’s not mounds of canned salmon lying around at the time of the year,” he said. “So it was an interesting time for salmon producers to react quickly to make sure they could keep their product in front of people but also not run out.”

Sales have slowed to more normal levels, Daly said, adding that “normal isn’t pre-pandemic levels anymore. It’s about a 10% increase from that. That obviously means that canned salmon has gotten in front of more people and they’ve made repeat purchases.  We want to capitalize on that.”

Canned fish today accounts for only about 5% of Alaska’s salmon products. Of that, about 20% is canned sockeye which goes mostly to Canada, Europe and Australia. The bulk is pink salmon which for over 100 years has predominantly been sold regionally across the U.S.  Most of the sales have been driven by older Americans; Daly said a goal is to broaden appeal to younger buyers.

“A longer term goal is to produce an item that’s more in line with what a younger consumer’s looking for. Maybe it’s a pouched grab and go snack, maybe it’s flavor added,” he said.

Daly is convinced that Alaska’s oldest salmon product has the staying power to remain as one of the state’s most well-known tastes of history.

“There was an article two years ago that said millennials don’t even own a can opener, so how is that going to go for canned fish?” he quipped. “Ever since I’ve been in the industry, I’ve heard that canned salmon is dying. And here we are with record numbers.”

AK salmon gets swamped - Alaska wild salmon accounts for only about 13 percent of the global salmon supply and competition will ramp up this year from other producers, notably Russia.

Alaska is expected to produce a total harvest this year topping 190 million salmon, adding up to 880 million pounds. Global seafood supplier Tradex reports that a harvest of 300 million salmon is projected from Russia, topping 1 billion pounds. Much of that Russian salmon will compete with Alaskan fish in supermarkets across America and with international customers.

Last year the U.S. imported nearly 38 million pounds of Russian-caught salmon products valued at over $14 million. Of that, 2.3 million pounds was sockeye salmon, valued at nearly $9 million. Yet Russia has not purchased one pound of any U.S. seafood since 2014.

Meanwhile, Tradex president Rob Reierson said even more wild salmon will be added to the pack from other nations.

“Globally, a veteran wild Pacific salmon expert projected an estimated 930,000 metric tons (over 2 billion pounds) of Pacific salmon to be harvested from all countries including Canada, Japan, and Korea in 2021.”

But the numbers for wild caught salmon pale in comparison to farmed fish, which now captures nearly 74% of the world’s overall salmon production.

Salmon farmers, led by Norway and Chile, are expected to produce nearly 6 billion pounds this year. And global reports say farmed and wild-caught combined are not expected to come near to satisfying the world’s demand for salmon.

Herring ho-hum - It’s a big year for Alaska roe herring fisheries, but lackluster interest by both harvesters and processors is an ongoing story.

The fishery at Sitka Sound opened on March 27 after a two-year stall due to small fish and a weak market. The seine fleet this year has a harvest of 33,304 tons (nearly 67 million pounds), but managers predict low participation and limited processing capacity.

Ten or 15 boats could fish starting April 1 at Kodiak for one of its biggest fisheries in decades at 7,895 tons (16 million pounds).

Togiak at Bristol Bay is Alaska’s largest roe herring fishery, this year with a whopping 42,639-ton harvest (over 85 million pounds). Last year only three boats and one buyer showed up there during the May fishery.

The reason?  The herring market has tanked over two decades by disinterest from the single buyer, Japan, where tastes and buying policies have changed. In the 1990s, Alaska fishermen fetched $1,000 a ton or more, and while product from Sitka today might pay out at a few hundred dollars a ton, at Togiak the price has been $50-$75 for several years. Alaska’s herring catch in 2020 was so low that all data remain confidential.

“It is maybe the most extreme example I’m aware of how a major Alaska industry could be dependent on an extremely specialized foreign market,” Gunnar Knapp, a retired University of Alaska fisheries economist, told KDLG in Dillingham.

Robert Heyano, who has fished at Togiak for over four decades, added that “the industry needs to find other ways to sell its herring, such as bait or food.”

Waste is another issue.

Herring is frozen and usually shipped to Japan, where the roe is extracted. The male fish have almost no value and are mostly turned into fish meal, sold as bait or ground up and dumped. That’s also the fate of the female carcasses after their roe is taken.

It’s estimated that only 12 percent of Pacific herring is used for human consumption. A report by the Alaska Seafood Marketing Institute claims that if the discarded herring was instead turned into fillets, it would increase the first wholesale value by $11 million a year.

Alaska’s herring fisheries have been managed for sac roe since the 1970s but today the fish is far more valuable as bait. At Dutch Harbor, for example, bait herring pays out at over $500 per ton; at Cook Inlet it brings at least $1 per pound for fishermen. Ironically, many Alaska fishermen purchase herring for use as bait from the East Coast.

Forrest Bowers, deputy director of the state commercial fisheries division, agreed that it could be time for a change.

“Those are regulations that the Board of Fish could modify,” he said. “If a person said we want to increase this opportunity or provide an additional opportunity to obtain their own bait, that is something the board could take a look at. And if we are in areas where the harvestable surplus isn’t being taken in the sac roe fishery, why not allow it in a different fishery.”