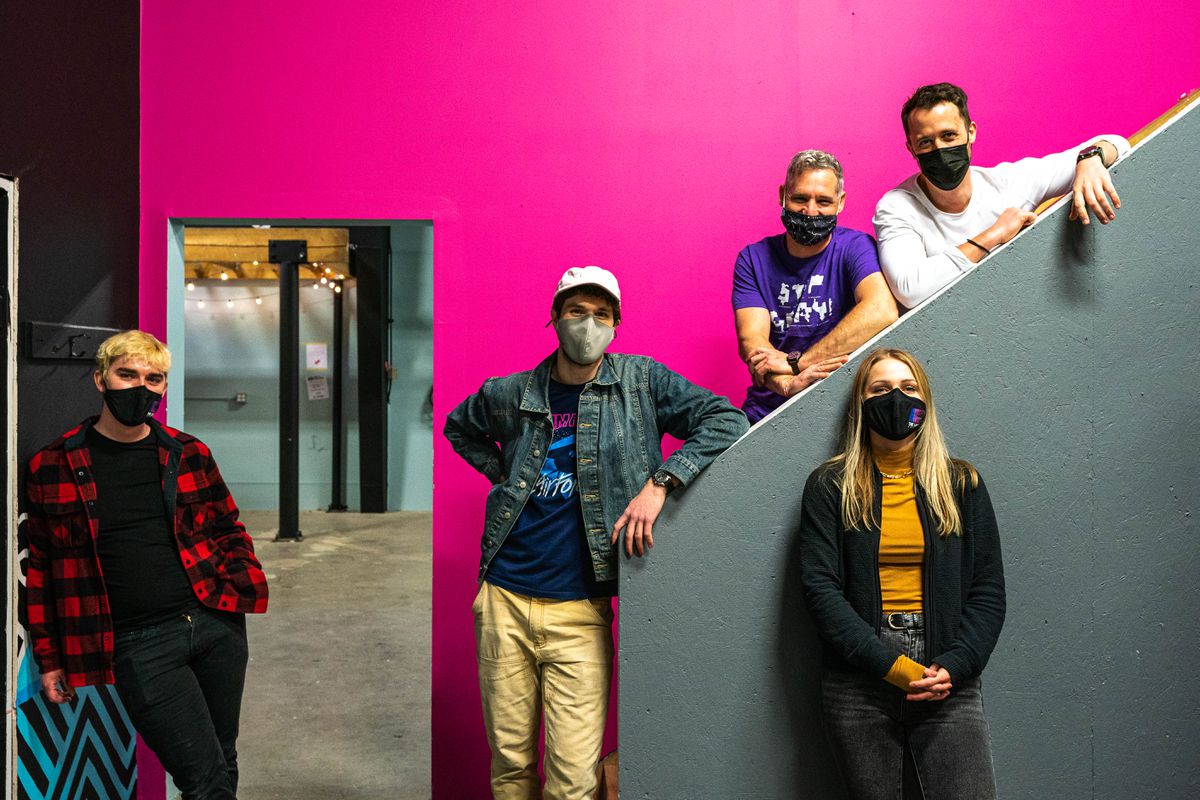 From left, community coordinator Mitchel Jurasek, hardware engineer Jacob Powell, chief technician Tim Paszalek, director of operations Rachel Williams, and founder and CEO Ben Kellie pose for a photo at The Launch Company on Thursday, April 1, 2021. The Anchorage-based aerospace business was acquired by Voyager Space Holdings on April 1, but will continue to operate from their base in Alaska. (Loren Holmes / ADN)

From left, community coordinator Mitchel Jurasek, hardware engineer Jacob Powell, chief technician Tim Paszalek, director of operations Rachel Williams, and founder and CEO Ben Kellie pose for a photo at The Launch Company on Thursday, April 1, 2021. The Anchorage-based aerospace business was acquired by Voyager Space Holdings on April 1, but will continue to operate from their base in Alaska. (Loren Holmes / ADN)

On a recent weekday at a mural-covered warehouse in Anchorage’s Ship Creek area, engineers stuff shipping containers with tubing, pumps and tanks. Many of these will be shipped to launch sites across the country and hooked up to rockets, feeding it fuel through stainless steel hoses.

At the critical moment when the rocket leaves the ground, special fittings connecting the hoses to the rocket will separate into two pieces and snap shut, leaving the shipping container on the ground as the rocket soars off.

These fueling modules are part of the bread and butter of The Launch Company, a small Anchorage business that helps other companies get their rockets into space.

The company isn’t unique just because it makes astral products. It has accomplished something that may be even more unusual: An acquisition for a young Alaska startup.

The company finalized a deal on Thursday to be bought by Colorado-based Voyager Space, just two years after being founded. The company will remain in Alaska, but the purchase will bring an influx of cash and access to the resources of the other companies under Voyager’s umbrella.

“In a word, it’s fantastic,” owner and CEO Ben Kellie, 34, said. “They understand how important Alaska is to us. They see Alaska as a strategic place for expanding access to space.”

Under terms of the sale, the company insisted it remain based in Alaska, a demand that was both personal and practical. Although being based in Alaska makes for easy access to the Pacific Spaceport Complex on Kodiak Island, Kellie said the company predominantly works on launches based in the Lower 48.

“I want to raise my family here,” Kellie said. “I want to have a lot of interesting opportunities for us to work on. And I want people to be excited about Alaska’s future.”

What the company does is complicated — it’s rocket science — but it’s broadly aimed at helping other companies leap the logistical hurdles of launching a vehicle into space, from designing launch sites to building hardware that helps get rockets off the ground.

“We’re able to help them get to orbit faster by solving the parallel problem of the launch site,” Kellie said. “It’s not as simple as just rolling the rocket out and lighting it on fire.”

The company’s Alaska roots run deep. All of its 13 employees were either raised in Alaska or received degrees from an Alaska college. Kellie was raised in Nikiski, and accompanied his bush pilot father on grocery deliveries across the state as a child, sparking a love for the Alaska lifestyle and landscapes that he never lost.

After earning a graduate degree from Ohio State University, Kellie became an engineer at SpaceX, the space company founded by Tesla billionaire Elon Musk, where he helped design and build floating landings pads before they would “drag them out into the ocean to try and land rockets, but actually just blow them up.”

The company is a tech startup: a small business founded by an entrepreneur with a unique idea that aims to grow rapidly. That’s unusual in Alaska. Companies born from Silicon Valley’s intense startup scene have become dominant forces in American technology.

The end goal of these businesses is usually to score a payday, either through being bought by another company or selling shares on the stock market. But startups are also known for frequently shutting down before that happens. Kellie understands this firsthand, having shuttered a drone company he founded in 2015 after moving back to Alaska.

“A great idea is great,” Kellie said, “and paying customers are even better.”

Perhaps unsurprisingly, Alaska’s startup scene is scrappy. The company is self-funded, but startups usually grow through money provided by outside investors. According to data provided by research firm PitchBook, Alaska companies pulled in $16.2 million in venture capital investing over the course of 2020, the fourth-least of any state.

“You can even look at smaller communities that are growing at more rapid paces than ours,” UAA Center for Economic Development Associate Director Gretchen Fauske said.

Fauske said it’s so rare for a young Alaskan startup to be bought that she can’t remember the last time it happened.

“GCI, long, long ago, was a startup that was started out of someone’s garage with just a really small team, and they were recently acquired by Liberty Ventures,” Fauske said. “But that was after years.”

Kellie’s hope is that his success will show others that Alaska is a worthwhile place to start a business — even one off the beaten path.

“If there’s an impact,” Kellie said, “which, who knows if there will be— I would love for people to say ‘Holy smokes. We can build anything here. We can do anything here.’”

Freelancer Max Jungreis grew up in Anchorage and became a journalist so he’d never get bored. His work has appeared in Business Insider, The Boston Globe, and elsewhere. Email maxtips@protonmail.com.