Alyeska Resort is building a $15 million Nordic spa, set to open this summer 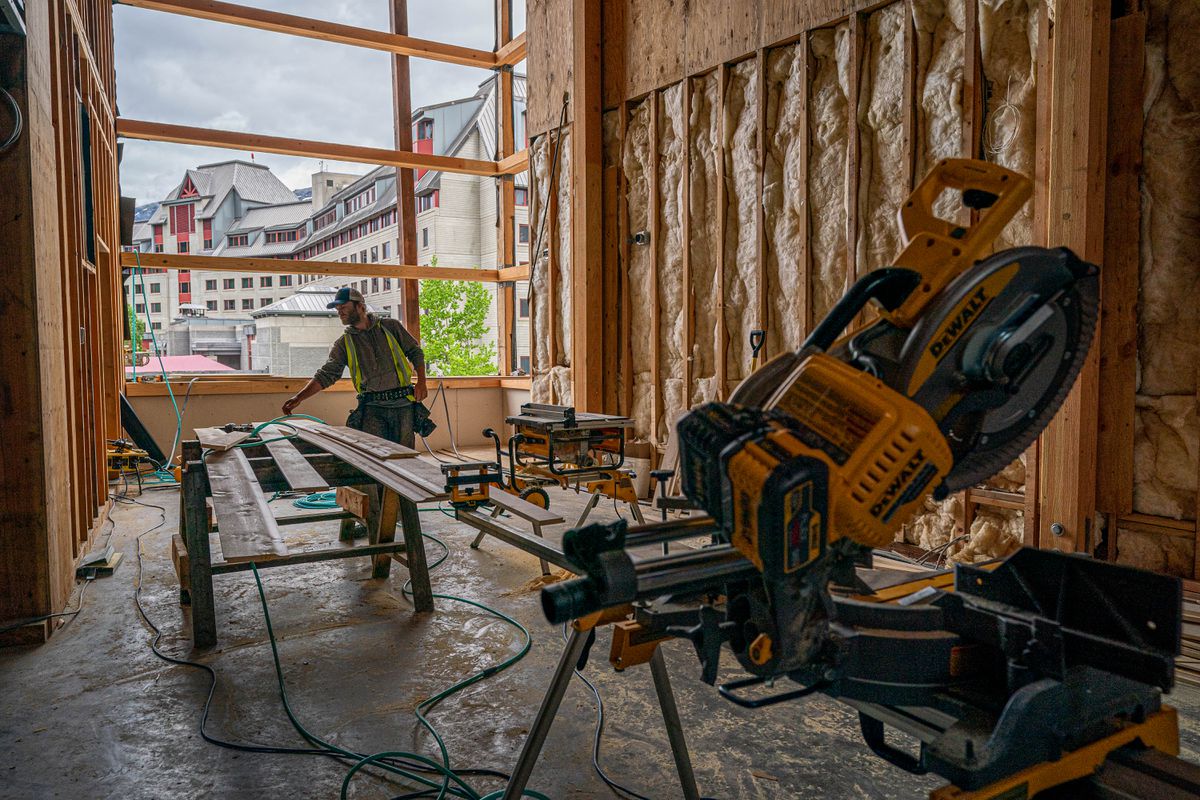 A construction worker cuts siding at the Alyeska Nordic Spa on Thursday, June 10, 2021 at Alyeska Resort in Girdwood. The new spa, adjacent to the existing Hotel Alyeska, is planned to open this fall. (Loren Holmes / ADN)

A construction worker cuts siding at the Alyeska Nordic Spa on Thursday, June 10, 2021 at Alyeska Resort in Girdwood. The new spa, adjacent to the existing Hotel Alyeska, is planned to open this fall. (Loren Holmes / ADN)

Alyeska Resort in Girdwood will soon open a $15 million outdoor Nordic spa with a series of heated and cold pools, saunas, hot tubs, steam rooms, waterfalls and a bar and bistro.

Hotel representatives say the saltwater spa, with a 1.5-acre footprint near the tram and hotel, will be the largest addition to the resort since the 300-room Hotel Alyeska was built in 1994.

The spa is set to open in late summer. It’s a bit behind schedule, and in some areas costlier than expected, because of complications finding workers and building supplies during the COVID-19 pandemic, they said.

The spa will operate year-round, with heated walkways, specialized robes designed like winter jackets and hammocks lined with fleece.

“It’s all about moisture and water and interacting with the rainforest,” said Marco Zaccaro, the project’s lead architect, during a tour of the site on Thursday.

At Nordic spas, common in Scandinavian countries, people move from very hot pools to extremely cold ones, or they can just hang out in warm pools if they like.

Guests will start the day in a large cedar-sided building with a bar and bistro on one floor and an area for changing and locker rooms.

From there they can access the pools. One outdoor area will be more open for gathering in larger pools. Another area in the trees will be sprinkled with barrel saunas and smaller hot tubs for small groups.

Later, people will be given salt to scrub off with in an exfoliation area in a steam room.

Other services such as massages, yoga and Pilates classes and aromatherapy will be available, said Melissa LaRose, the spa’s general manager.

The building and trees will provide privacy from the hotel, the tram and the Winner Creek trailhead nearby, developers said.

A day at the spa will be sold separately from skiing or the hotel, or as part of a resort package. A day pass will cost around $95, LaRose said.

The spa and bistro will employ about 80 people, said LaRose.

Dozens of workers with several companies have been involved in design and construction, hotel officials said.

Larry Daniels, senior project manager for Alyeska, said the project would have been further along, but it has been difficult to find enough workers — a common issue for businesses as the pandemic disrupted the workforce.

A shortage of construction materials, especially lumber, has been another complication, he said.

“We’ve seen increases for some materials in excess of 100% since we budgeted the project last year,” he said.

The resort is owned by Pomeroy Lodging, a Canadian hospitality company that also operates the Kananaskis Lodge and Nordic Day Spa in Canada.

Nordic spas are popular at Canada ski resorts but rare in the U.S., LaRose said.

“This is certainly the only one of this scale in the U.S.,” she said.