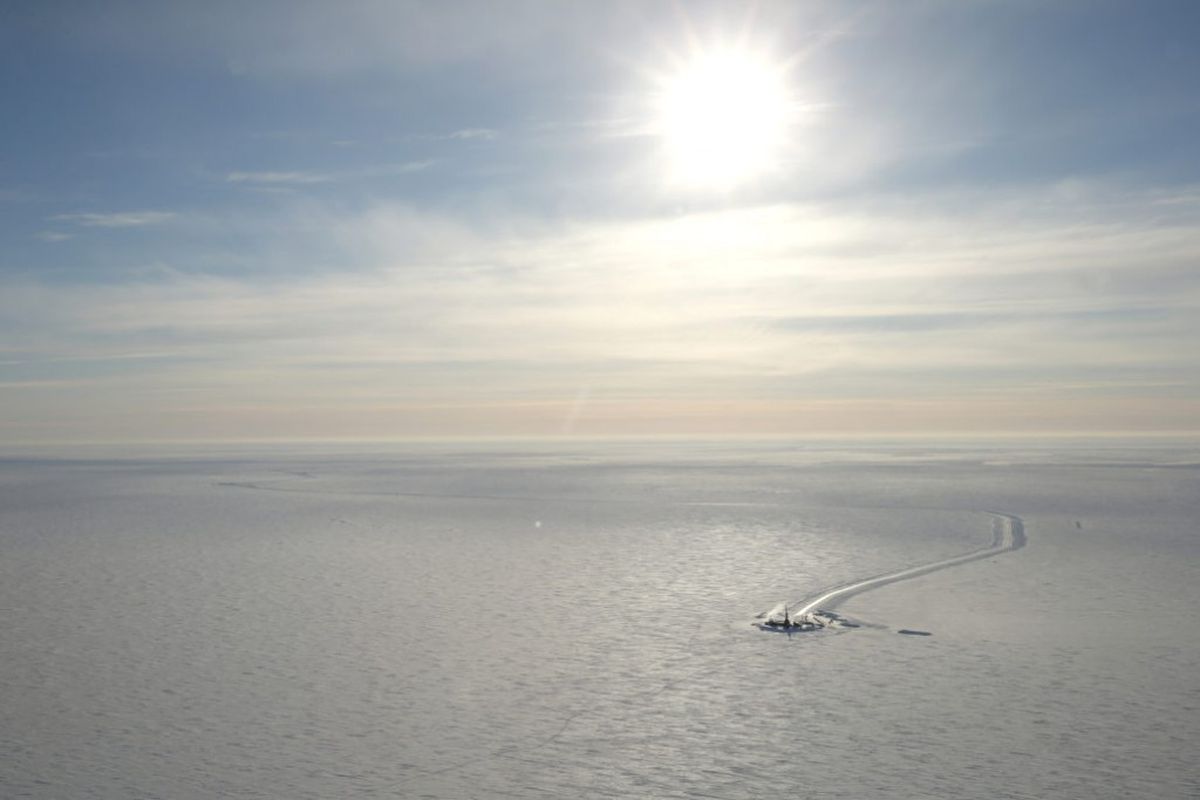 Caelus Energy Alaska said Tuesday it has made a "world-class" oil discovery that, if estimates prove true, could be one of the largest finds ever in Alaska.

The Smith Bay site, in shallow waters about 50 miles southeast of Barrow, could "provide 200,000 barrels per day of light, highly mobile oil," the company said in a press release Tuesday.

If correct, that production level would make the field more prolific than ConocoPhillips' Alpine unit, which began production in 2000 and reached a production peak of 139,000 barrels in 2007.

The statement from Caelus does not indicate analysis by a third-party engineering firm. The estimates are the company's internal numbers, a spokesperson said Tuesday morning.

The statement also notes that flow-tests, a step in verifying a well's capabilities, were not conducted "due to seasonal time constraints."

He said the company could certainly be sitting on a large find, based on the work done so far, including seismic mapping showing the extent of the reservoir, and two wells drilled about 5 miles apart that show the thickness of pay zones containing oil.

One thing in the project's favor, if Caelus' reports are correct, is the oil flows easily.

Still, Houseknecht cautioned it's early in the process, and more will be known with additional testing.

"I would not want to get too bullish right now," he said.

"I'd say we will know more when Caelus actually does well-testing," he said, providing a better idea of potential production rates.

"That's never been developed and one reason is that when they drilled two more wells they found, 'Whoops, the reservoir is not quite what we expected it to be based on the first well,' " he said. "So I don't want to denigrate this press release because it sounds great, but you have to have a certain amount of caution, at least I do, working at the USGS."

If the project is developed, it could take five to 10 years before oil flows, with permitting requirements, limited work seasons and other challenges, he said.

The company said its discovery comes after two wells were drilled early this year, and after it conducted 3-D seismic exploration across 126 square miles.

Light oil can flow like water or corn oil, and is easier to extract than viscous or heavy oil.

"Caelus expects to achieve recovery factors in the range of 30-40 percent," the statement said. "Additional drilling and seismic should improve estimates of oil in place via delineation of undrilled fan lobes and channel complexes imaged on the original 3D seismic."

Caelus has estimated the field's oil recovery potential as below Prudhoe Bay and just below the Kuparuk River field, two of the largest fields in the U.S. that continue to dominate Alaska oil production.

A pipeline from the field would need to extend more than 125 miles before it could be tied into existing oil field infrastructure, and a processing center would need to be built in the Smith Bay area to prepare crude oil for shipment, Caelus officials said.

In addition to exploration, Caelus Energy, headquartered in Dallas, produces oil at the small Oooguruk field on the North Slope. The company acquired the field in 2013 from Pioneer Natural Resources when that company left Alaska to focus on shale opportunities in Texas.

The company's chief executive, Jim Musselman, said in the statement "fiscal stability" will be critical for the Smith Bay field's development, a reference to a stable tax program as cash-strapped Alaska continues to look at reducing subsidies to the oil industry. He said oil-tax credits offered by the state were critical to the discovery.

The leases are in state waters, so royalty and tax benefits would flow to the state, officials said. The royalty to the state for the Smith Bay leases is set at 12.5 percent.

The oil would be produced from a new unit and would qualify as "new oil," a designation under the state's production tax code resulting in extra-generous tax from the state.

Gov. Bill Walker and the Legislature altered the oil-tax system this year, including placing a sunset on the "new oil" designation, limiting it to a 7-year window.

New oil – generally from fields that began producing in 2008 – will not begin to pay a production tax until Slope oil prices reach $73 a barrel, according to an analysis in February by Ken Alper, director of the Alaska Tax Division.

Prices for Slope oil have hovered around $50 a barrel for almost two years. The state's decadelong price forecast released this spring projects prices below $70 a barrel through 2025.

The Walker administration is currently discussing additional changes to limit tax benefits to be considered during the next legislative session starting in January.

"My administration will continue to work with the industry to identify new development opportunities in Alaska's oil and gas sector, and provide appropriate investment incentives given our current fiscal climate," he said, without providing additional detail.