Homer-based Cook Inletkeeper said in a statement to reporters that the leak from an 8-inch undersea pipeline owned and operated by Hilcorp threatens water quality, fish, endangered beluga whales and the climate.

The Homer-based organization posted a video on YouTube taken from the air, showing turbulence on the water from the escaping gas, and what appear to be large rippling rings near pans of ice.

The rate of the spill was estimated on Tuesday at between 225,000 to 325,000 cubic feet of gas per day, according to the Alaska Department of Environmental Conservation. Based on that number and average household consumption rates made public by Enstar Natural Gas Co., the amount of wasted gas would have been enough to fuel about 390 homes a day in December.

Bob Shavelson, executive director of Cook Inletkeeper, said the video was taken soon after the discovery of the leak. The water disturbance was originally spotted by a Hilcorp helicopter on Feb. 7. The company has described it as a "bubbling" above the pipeline route, a term Shavelson has asserted does not do justice to the size of the leak. He compared it to a cauldron.

Hilcorp has reduced flow through the leaking gas line since its discovery, reducing the estimated size of the leak, a state official said.

Cook Inletkeeper also provided reporters with a copy of a "Notice of Violation and Intent to File Suit," addressed Wednesday to Hilcorp Energy Company chief executive Jeffery Hildebrand, based in Houston, Texas. The letter says notice must be provided under the Clean Water Act 60 days before the start of a civil action.

Signed by Shavelson, the letter argues that methane from the "illegal discharge" could reduce oxygen levels in the water column, harming animals. The letter also says methane, the key component in the gas, is a powerful greenhouse gas that can contribute to global warming.

The letter said Hilcorp is violating federal law because it does not have a permit under section 402 of the Clean Water Act "to discharge pollutants to waters of Cook Inlet."

Shavelson has urged state regulators to order the leaking pipeline shut down until repairs are made and the leak is stopped.

"Inletkeeper's letter today is meant to provide a back-stop in the event Hilcorp opts to continue to put profits over fish, wildlife and water quality in Cook Inlet, and to press Hilcorp to address the larger issue of relying on antiquated infrastructure as part of its Cook Inlet business model," Shavelson said in the statement to reporters. 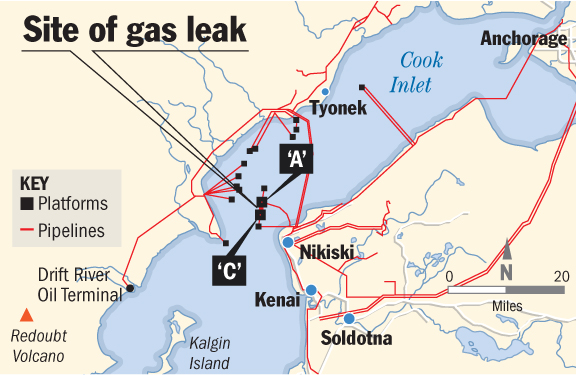 The leak is about 3½ miles offshore, northwest of Kenai.

Lori Nelson, external affairs manager at Hilcorp Alaska, said on Tuesday that the company is monitoring ice conditions and will dispatch divers when it can be done safely. The pipeline provides fuel gas for four offshore platforms in the Inlet, Nelson said Wednesday. She said shutting down the pipeline would risk it "taking in water, freezing and potentially rupturing."

And she added in a statement Wednesday that the company needed to keep the line pressurized. Without a minimum pressure, the line could fill with water, allowing residual crude oil to escape from what was previously used as a crude oil pipeline, she said.

Nelson said Hilcorp personnel have shut down "non-essential equipment" on the platforms.

"This step has been taken in order to reduce natural gas flow to the minimum operational gas pressure possible without jeopardizing employee safety or the environment," Nelson said.

Daily overflights in helicopters have revealed no sheen, she said.

"Hilcorp continues to work in cooperation with multiple state and federal agencies to ensure a safe and effective response to the natural gas leak on a Cook Inlet fuel gas line," she said.

Hilcorp announced in July 2015 it would purchase two offshore platforms and other facilities associated with the Middle Ground Shoal field from XTO Energy, a subsidiary of Exxon Mobil. The platforms, producing about 1,750 barrels of oil daily when the announcement was made, were built in the mid-1960s.

The Alaska Department of Environmental Conservation does not regulate natural gas, only liquid products. But it is monitoring the release, and does have authority for any release of hazardous substances to the environment.

"DEC is looking into a number of legal authorities, including the Clean Water Act, under which we can respond to this release, but first and foremost, we are focusing on this situation being safely and expeditiously mitigated," said a statement provided by Candice Bressler, public information officer for DEC.

The agency sent an "interest letter" to Hilcorp Alaska on Friday requesting information, such as Hilcorp's range of options for reducing the leak's environmental impact. Among other things, the agency also wants to know what monitoring activities the company will undertake to assess the environmental impact of the "hazardous substance" that is being released, according to Bressler.

The company has until Monday to respond, Bressler said.

A grisly checklist and a sickening rampage: What happened during the Uvalde, Texas school shooting

NTSB: 4 injured in crash of charter aircraft at remote airstrip near Yakutat