Alaska is trying to slice some land out of ANWR

The state's current dispute over the boundary of the Arctic National Wildlife Refuge, a place believed to have huge oil deposits, is partly based on a pilot for a defunct airline who came to believe long ago the U.S. government was enforcing an incorrect border.

Andy Bachner, a Fairbanks investor in oil and gas leases, said his flights across Alaska's North Slope as a Wien Air Alaska pilot started during the early days of the oil rush in the 1960s. That brought him into contact with petroleum geologists who took particular interest in that area of the Slope, which later became the 19-million-acre national wildlife refuge.

On his flights — sometimes at altitudes so low he could spot polar bears and whales — Bachner said he realized ANWR's northwest boundary, as enforced by federal officials, overshot the Canning River, the western boundary in the refuge's legal description, by far.

The federal government says the boundary extends to the Staines River, which it describes as a channel of the Canning. The state, and Bachner, say the Staines, farther to the west, is a river in its own right and therefore outside the refuge.

U.S. Interior Department officials say maps and geographical descriptions going back decades show the Canning is the source of much of the water in the Staines. The state says its field trips show otherwise. Both rivers flow separately into the Arctic Ocean. 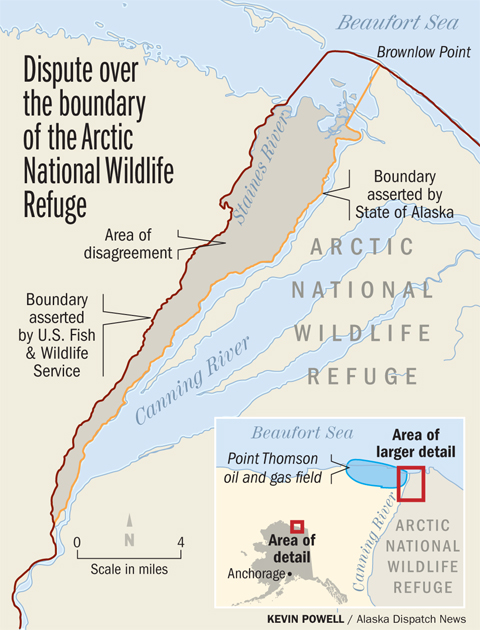 "In my opinion, I thought whoever came up with the boundaries had made a mistake," he said.

Decades later in 2011, Bachner and a minority partner bid on leases for offshore acreage just off the coast of that area. That led the state to take a closer look in an effort to determine where Bachner's leases should end.

That investigation led to the state's current battle with the U.S. Bureau of Land Management to receive title to a 20,000-acre wedge between the Canning and the Staines rivers.

A small portion of that disputed land includes the potentially oil-rich 1002 coastal area, a slice of the refuge plain that for decades has bitterly divided conservation and pro-development forces amid failed congressional efforts to permit drilling there.

The state says it has long argued teams surveying the ANWR boundary in the late 1960s erred. But the state has never taken the argument this far, to the Interior Board of Land Appeals, an appellate body in the Interior Department, officials said.

A state win there would put title of the 20,000 acres and nearby waters off the coast into the hands of Alaska. If that happened, and commercial amounts of oil were discovered not far from Exxon Mobil Corp.'s new Point Thomson development — located on state land near the Staines — the benefit to Alaska could be huge, said Bachner, 75.

The state and federal government are "arguing over potentially billions of dollars" in royalties and other income, Bachner said.

The state's fight has quietly played out before the federal agency since October 2014, when a manager in the Alaska Division of Mining, Land and Water sent a one-paragraph request to BLM in Alaska to convey the lands the state says it selected in 1964.

BLM, part of the Interior Department, denied the request last year, leading to the state appeal.

On Feb. 7, the appeals board in Arlington, Virginia, said it will consider procedural questions at this point, including BLM's argument the state has no right to appeal because the agency resolved the selection applications long ago, patenting all available land for conveyance to Alaska in 1974.

"There is nothing in the case files, nor is there evidence offered by the state, that the state ever objected to the decisions or the surveys upon which they were based — the last being issued in 1969 — 47 years ago," said BLM counsel Joe Darnell in August.

The state says it did not have the manpower then to review every field survey. Between 1961 and 1971, an area nearly the size of West Virginia — almost 13 million acres — was given to the state or tentatively approved for patenting.

It came "in small pieces spread across an area twice the size of Texas, much of it with no transportation infrastructure and all of it with a short field season for survey work," the state argued in a reply signed by Michael Schechter, assistant attorney general.

Parsons said Alaska has a huge, unfulfilled land entitlement — about 5 million acres from Alaska's original 104 million-acre entitlement at statehood. The sought-after acreage is part of the land Alaska should have already received but hasn't, he said.

The dispute is separate from Alaska's attempts to allow drilling operations in the refuge's 1002 coastal plain. The state's congressional delegation has recently introduced bills to approve that, a move the delegation and state political leaders have tried for decades without success.

If the state wins its boundary case, it would gain a small portion of that area and would include it in future oil and gas lease sales, said Alaska Department of Natural Resources Commissioner Andy Mack.

Last summer, the state hired a company to conduct aerial mapping to bolster its case. A different company reviewed aerial photos dating back to the 1950s, showing the area has not changed significantly since that time.

BLM officials said Thursday they could not comment while the case is under review.

Bachner hopes the state is right. A Beaufort Sea lease he acquired from the state would expand by close to 1,000 acres if Alaska wins. Additional oil development in the area, if it ever occurs, could boost the value of his investment while helping Alaska.

"Each acre could be extremely valuable," he said.

OPINION: The 1980s hearings that explain why Trump’s base still loves him