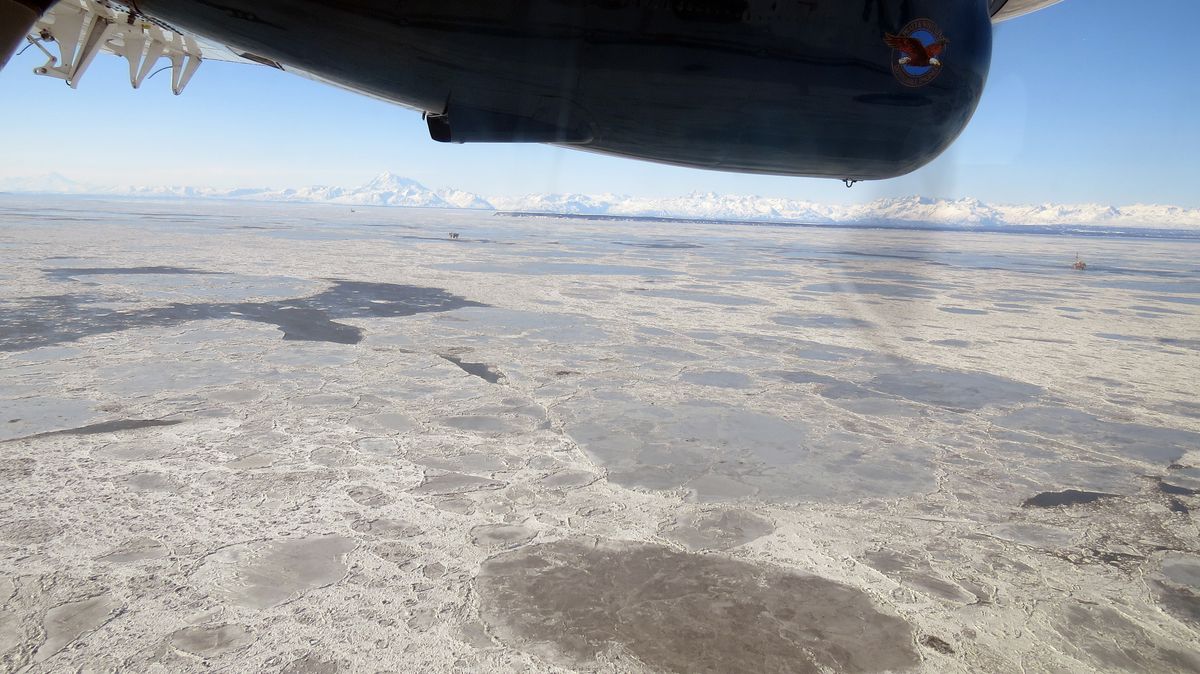 Pan ice is abundant in Cook Inlet on March 9 in the general area of the natural gas leak from a Hilcorp Alaska pipeline carrying fuel gas for use by offshore platforms. Sea surface bubbles from the leak could not be detected due to the ice cover.(Jacob Cunha / Alaska Department of Fish and Game)

Pan ice is abundant in Cook Inlet on March 9 in the general area of the natural gas leak from a Hilcorp Alaska pipeline carrying fuel gas for use by offshore platforms. Sea surface bubbles from the leak could not be detected due to the ice cover.(Jacob Cunha / Alaska Department of Fish and Game)

Following discussions with Gov. Bill Walker, Hilcorp Alaska said Saturday morning it has agreed to temporarily shut down oil production at two platforms in Cook Inlet to fight a leaking natural gas fuel line that has generated concerns for weeks about threats to wildlife and other hazards.

The leaking, undersea 8-inch line delivers natural gas used as fuel to four aging offshore production platforms in the Cook Inlet basin. Only two of the platforms produce oil, in small amounts, but the other two still need electricity for such things as navigation lights for mariners.

"I appreciate that the company officials are implementing a prudent plan of action," Walker said in a statement released by his office. "Alaskans want peace of mind that our waters are protected."

Natural gas will still flow through the line, though at reduced pressure once the oil production is stopped. Shutting off oil production will take place starting this weekend, Hilcorp Alaska said in a statement issued Saturday morning.

Oil production will remain shut down until the leak is fixed, the governor's office said.

"Hilcorp executives committed to Governor Walker that they will not be starting up production at the platforms again until federal and state regulators are satisfied the oil and gas lines can be operated safely and in accordance with all applicable laws," the governor's office said.

Pressure in the line will be reduced to about 65 pounds per square inch, from 145 pounds per square inch. The reduction was made after discussions that included the Alaska Department of Environmental Conservation, the company said in its statement, issued by Lori Nelson, external affairs manager at Hilcorp Alaska.

With the reduction in fuel gas, oil cannot be produced at the Middle Ground Shoal platforms, known as Platform A and Platform C, officials said.

Kristin Ryan, director of DEC's Division of Spill Prevention and Response, said methane would still leak from the pipe once oil production was stopped. But it would occur "at a much reduced rate."

She said Saturday that "there are very good environmental reasons" for the decision to keep some gas in the line "rather than completely shutting the pipeline down."

One important consideration is that seawater must be pumped through the separate pipeline that carries produced crude oil to a facility on shore. That 8-inch oil line parallels the leaking gas line extending to Platform A, located about 5 miles offshore.

Pumping seawater through the crude oil pipeline is needed to prevent that line from freezing and cracking once oil stops flowing through it, said Ryan. Some residual oil will remain in that crude oil pipeline and it would have "high potential" of escaping into the Inlet if the line cracked.

"We need to keep the integrity of that pipeline intact," Ryan said.

"From an oil spill response perspective, we think this is a good outcome that minimizes a lot of risks," she said.

Walker's office said the reduced pressure in the fuel-gas line will be the minimum pressure needed so seawater cannot enter that line. The fuel-gas line was also once an oil pipeline. The company has expressed fears that old crude oil remaining in that fuel line could potentially leak into the Inlet if seawater entered and washed the oil out.

"The reduced pressure will allow Hilcorp to operate equipment to prevent freezing or breaking of other oil lines, which could lead to more spills," said the statement from the governor's office.

The leak in the water about 3.5 miles off the coast, northwest of Nikiski, was discovered by Hilcorp Alaska on Feb. 7. Federal pipeline regulators have indicated it has been occurring since December.

The U.S. Pipeline and Hazardous Materials Safety Administration has pressed the company to stop the leak or shut down the gas-fuel pipeline by May 1. The agency also expressed concerns that the old crude oil pipeline might also face the same risks that could have caused the leaking gas line, such as abrasion from rocks.

In recent weeks, Hilcorp Alaska has reduced gas flow in the gas pipeline by reducing activity at the oil production platforms, in turn reducing the rate of leaking gas, consisting almost entirely of methane. But the company has said it could not conduct repairs until sea ice cleared from the water because of dangers the ice posed to repair divers and boats. That has led to several weeks of delay, with repairs now not expected until April.

The mid-range leak rate is estimated to be about 200,000 cubic feet of gas a day, based on information from state environmental regulators. At that rate, the leak would have provided natural gas for about 290 homes in Southcentral Alaska in the cold month of December, based on average household consumption rates made public by utility Enstar Natural Gas Co.

Federal agencies have expressed concern about methane's potential threats to fish and wildlife if too much life-sustaining oxygen is displaced by methane in the water. Animals considered to be at risk include the endangered Cook Inlet beluga whale, shown by past studies to use the area near the leak in March. Adding to the concerns are that more wildlife should soon be migrating through the area, including salmon smelt that support important fisheries in the Inlet.

Hilcorp Alaska said it is working with regulators, and that planning and preparation for the temporary oil-production shutdown has begun. Procedures will begin this weekend, it said.

The line is expected to repaired soon, Hilcorp said.

"Hilcorp's response team and the necessary equipment are ready to immediately commence repair operations as soon as it can be done safely," the company said. "Based on current weather forecasts Hilcorp anticipates repair operations to occur in the next two weeks."

Hilcorp has created a website providing information about the leak at www.hilcorpresponse.com.