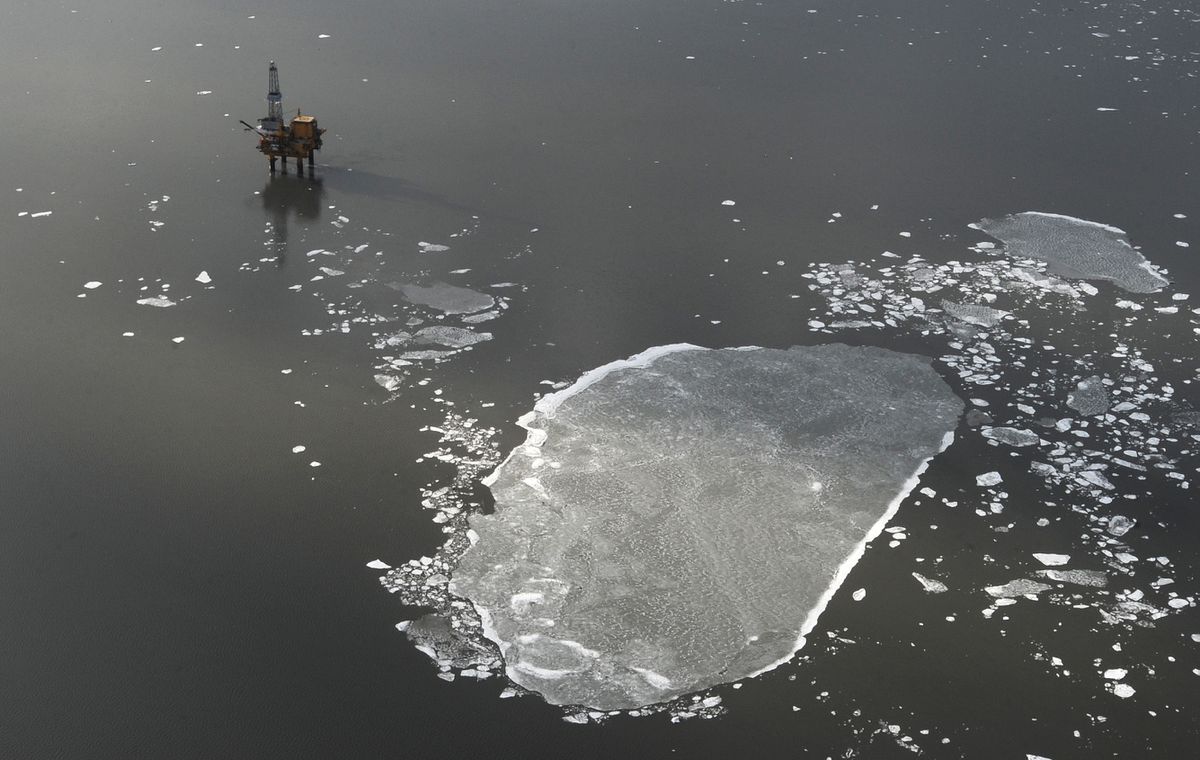 Hilcorp Platform A on April 2, 2017. A pipeline that delivers natural gas used as fuel for this platform and three others has been leaking since December. (Bill Roth / Alaska Dispatch News)

Hilcorp Platform A on April 2, 2017. A pipeline that delivers natural gas used as fuel for this platform and three others has been leaking since December. (Bill Roth / Alaska Dispatch News)

Growing concerns over Cook Inlet's antiquated oil and gas facilities have prompted renewed calls for increased oversight following announcements of multiple leaks this winter, including at a subsea natural gas pipe that has released millions of cubic feet of methane.

While the cause of the gas leak and the small oil release April 1 is uncertain, both happened at half-century-old facilities, raising questions about the condition of old pipelines and platforms and whether regulatory requirements are adequate. The Pipeline and Hazardous Materials Safety Administration also said Friday it was investigating another potential leak, from a natural gas pipeline from the Steelhead platform built in 1986 in western Cook Inlet.

Boosting alarm is that the operator in each case is Hilcorp Alaska, a Houston-based company that has been repeatedly fined by the Alaska Oil and Gas Conservation Commission, the state's oil well regulators, for "endemic" disregard for rules.

An AOGCC commissioner said Friday the company is taking steps to improve.

"The AOGCC has witnessed a marked improvement on their emphasis on regulatory compliance," said Cathy Foerster, the agency's chair.

And Hilcorp is in compliance with standards for pipeline infrastructure set by the Alaska Department of Environmental Conservation, said Kristin Ryan, head of the agency's spill prevention and response division.

"Are those standards enough for these pipelines? Maybe, maybe not, and we need to look into that," said Ryan, speaking to the House Resources Committee on Wednesday.

Conservation groups say the standards are indeed inadequate. They are pressuring state and federal pipeline regulators to take a bigger role protecting pipes from the inlet's silty, powerful currents. Fourteen of the inlet's platforms and the pipelines that service them were built in the 1960s when requirements were far less strict than today.

In a petition sent Thursday, the Center for Biological Diversity asked DEC and PHMSA to conduct a full inspection of all offshore pipelines in the inlet, said Kristen Monsell, staff attorney for the Arizona-based group.

Pipelines in the inlet could be "extensively corroded," putting Alaska at risk of a devastating spill, the group said. The gas leak at a pipe from Platform A was not discovered until early February, but Hilcorp data showed it had been leaking since late December, Monsell noted in the petition.

"While pipeline operators have some obligations to examine pipelines and repair damage, the fact that Hilcorp took over a month to even discover one of its pipelines was leaking gas indicates that self-policing does not work," the petition said.

The multiple leaks indicate that Hilcorp doesn't have good control of its operations, said Lois Epstein, an Alaska-licensed engineer and Arctic program director for The Wilderness Society.

Following an increase in spills more than 15 years ago, Epstein wrote a report for watchdog group Cook Inletkeeper calling for upgrades to infrastructure and stricter management. After extra attention, the amount of spills fell significantly, she said.

"We were talking about it in 2002. Now we get new operators and guess what — they forgot everything or never learned it," she said, referring to Hilcorp.

The company has aggressively acquired old facilities since arriving in Cook Inlet in 2011, boosting oil and natural gas production and winning praise from some for helping prevent a looming gas shortage in Southcentral Alaska.

David Wilkins, senior vice president of Hilcorp Alaska, said the company has spent $165 million on maintenance and infrastructure in Cook Inlet since 2012. It plans to spend another $31 million this year.

Wilkins said steel pipelines like those in the inlet can last indefinitely with proper inspection, maintenance and actions to prevent corrosion. Federal regulators have agreed upon that point, Wilkins said in an email, sent by Hilcorp Alaska spokeswoman Lori Nelson.

"It should be noted that the proper maintenance and inspection of pipelines are but two ways Hilcorp ensures the safety of our operations," Wilkins said.

Steve Russell, who retired in 2016 after working at DEC, said companies and regulators do a good job in Cook Inlet. But he said they often must rely on decades-old blueprints or drawings to find pipes and get other information. The drawings aren't as accurate as new ones today, complicating efforts to determine locations and installation and manufacturing details.

"Sometimes it's surprising what you find when you put a shovel in the ground," he said.

The Cook Inlet Regional Citizens Advisory Council, another watchdog group, is taking steps to update its 2000 report providing details on the infrastructure.

The update should be part of a full-scale assessment of the Inlet's pipelines and other hardware, said Mike Munger, executive director of CIRCAC.

Mike Navarre, mayor of the Kenai Peninsula Borough, said that despite its problems over the years, the Inlet's oil and gas facilities have held up well, thanks to regular inspections and steps taken by operators and regulators.

"That's in a very dynamic water body with the second-highest tidal zone in the world, scouring activity, and the earthquakes we've had over a long period of time," he said.

Noting that the oil and gas industry brings important jobs and tax revenue to the borough, Navarre said he'd like to see an integrity assessment done so everyone can have a better understanding of the condition of platforms and pipelines. The recent incidents could be an anomaly, or they could be age-related, he said.

"What we need to do is figure out if there are concerns, and work to make sure we address them," he said. "I don't think anyone has a definitive answer now."