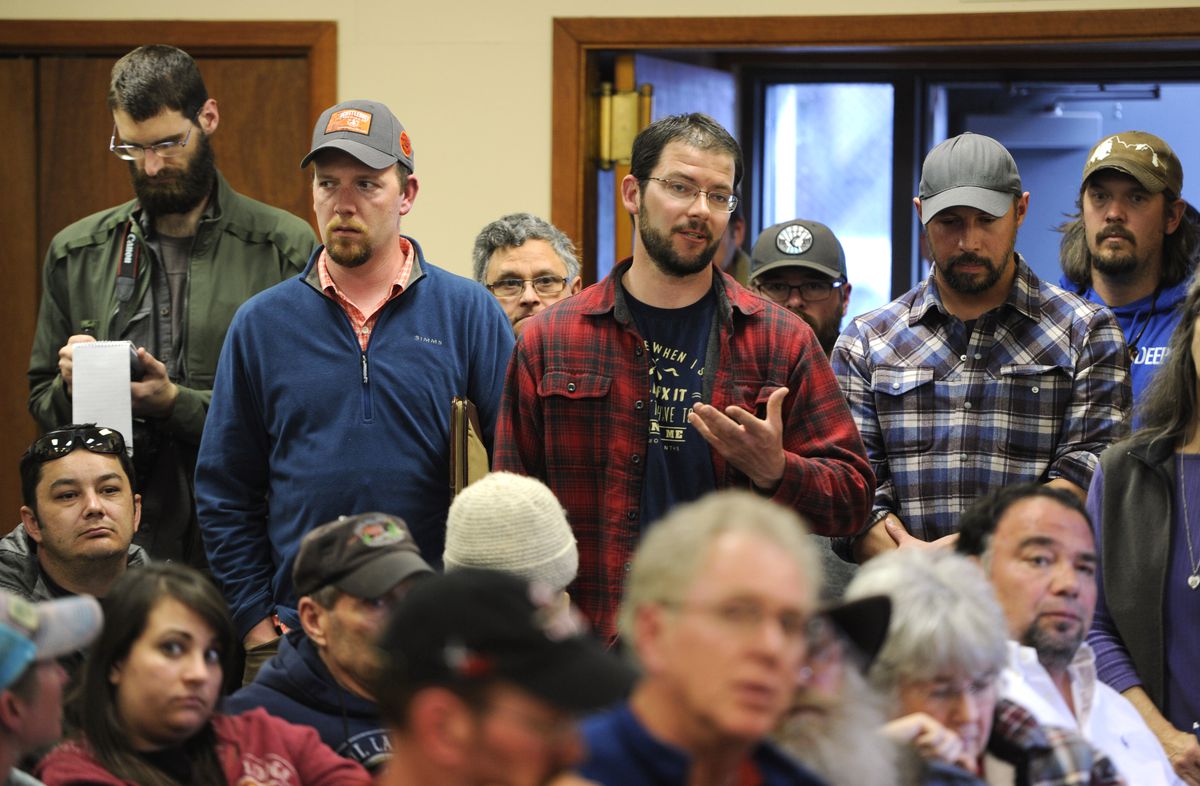 Jan Bukac of Seward asks a question during the Chugach Electric Association public meeting in the Moose Pass Community Hall on the proposed hydroelectric project on the North Fork of the Snow River on Tuesday. (Bill Roth / Alaska Dispatch News)

Jan Bukac of Seward asks a question during the Chugach Electric Association public meeting in the Moose Pass Community Hall on the proposed hydroelectric project on the North Fork of the Snow River on Tuesday. (Bill Roth / Alaska Dispatch News)

Chugach Electric Association said Thursday it will end its study of a hydroelectric dam at Snow River on the Kenai Peninsula following a public outcry against the project at meetings this week in Anchorage and Moose Pass.

"Sustainability is very important to us, and we want to find long-term supplies of energy that will allow Chugach to provide electricity to Alaskans for decades to come," Reiser said.

The board on Thursday accepted a staff recommendation to stop all work on the project, the electric cooperative said in a statement emailed to news media just before 6 p.m.

Chugach Electric on March 22 received a preliminary permit from the Federal Energy Regulatory Commission so it could study the proposed dam at an alpine wilderness site about 15 miles between Seward and Moose Pass.

Though Chugach officials stressed the proposal was only a concept and a dam would not be built until at least 2027, resistance to the idea built rapidly.

About 100 people crowded into meeting halls Monday in Anchorage and in Moose Pass along the Seward Highway on Tuesday. Utility officials took about two hours of comments and questions in Moose Pass where not one person voiced support.

Most were concerned the dam would hurt salmon and trout populations that support fishing and tourism in the region. The utility planned to dam the Snow,  which flows into Kenai Lake and feeds the Kenai River.

"I don't know who thought this up, but it's another one of these deals — let's pick a perfect place in the world and screw it up," said Bob Shafer, a longtime fisherman and former local newspaper owner from Seward.

Dams are being torn out in the Lower 48 because they hurt fish populations, critics said. John French, an environmental toxicologist from Seward and former professor with the University of Alaska College of Fisheries and Ocean Sciences, said this dam will surely hurt fish too.

The utility's statement Thursday said it considers the economic, environmental and social impacts of projects. The early public process showed the project does not fit with those goals, the utility said.

"As a member-owned cooperative that values the opinions of Alaskans and the communities we serve, we have decided to end the Snow River study," said Lee Thibert, the utility's CEO. "We are committed to sustainable energy, but we've heard from many Alaskans who do not want us to study this option, and we appreciate and respond to those voices and concerns."

The board had approved $200,000 this year to begin studying the project. The utility had planned to inspect the site this year. It has also held meetings with government agencies and other groups, including detractors of the proposed dam.

The utility had proposed a 700-foot-wide, 300-foot-tall hydroelectric dam at the river's north fork, as well as two smaller dams nearby, to create a 5,321-acre reservoir at Paradise Valley.

Utility officials had said energy from the dam could eventually replace waning natural gas supplies that currently provide fuel for most of the Chugach's electricity. But it said it was also looking at other, future energy options as well.

The Chugach National Forest has recommended the Snow for special designation and protection as a wild and scenic river, a classification that requires congressional approval.

Lisi said the group is celebrating, but will remain involved in efforts to protect watersheds in the region.

"I'm definitely a little shocked for sure," he said.

But the group felt the project was ultimately doomed, in part given the strong resistance.

He said he hoped Congress will designate the river as wild and scenic, he said.

"That is the ultimate goal for this river," he said.