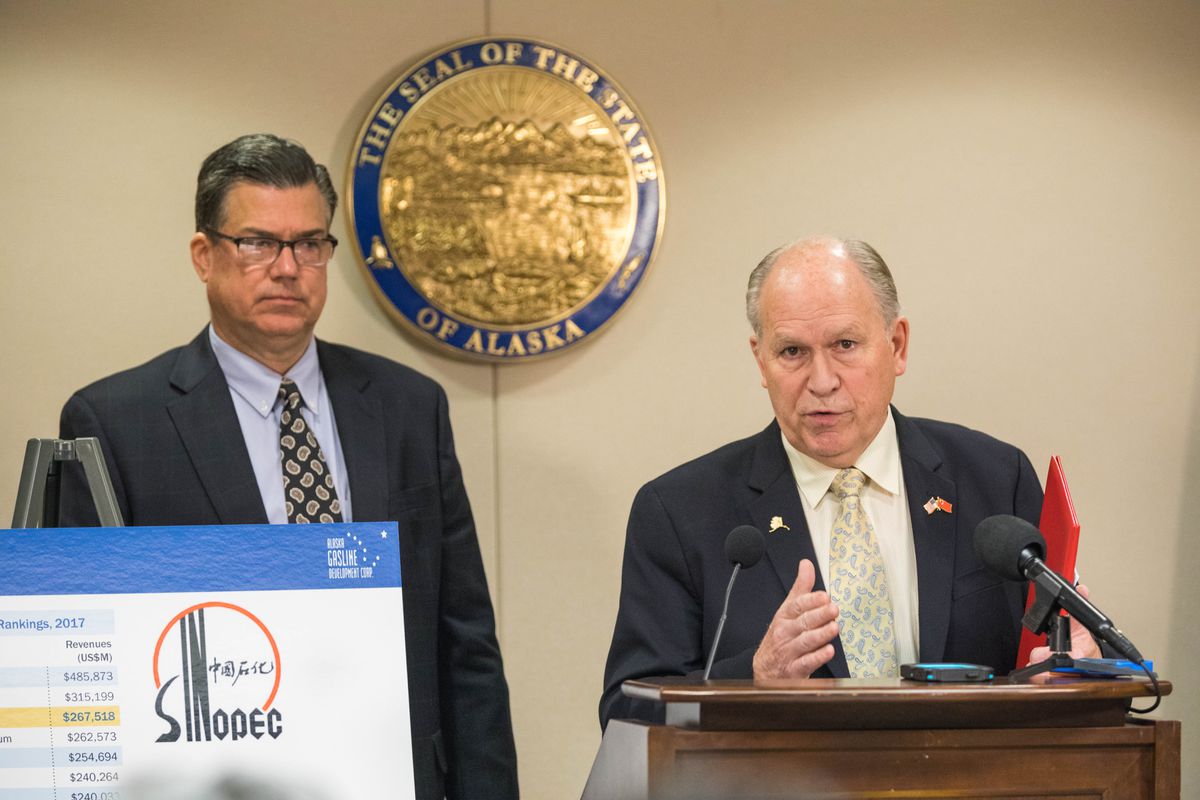 Gov. Bill Walker this week unveiled the agreement that could allow China to invest in Alaska's giant natural-gas export project. Once completed, the project could bring Alaska up to $2 billion in annual revenue, he said.

But Walker and Keith Meyer, head of the state's gas line corporation, stressed that significant work lies ahead before a binding deal is signed between the state and three China-owned entities, including oil giant Sinopec.

Meantime, at least some Alaska observers who awaited the agreement's release to verify details said they remain skeptical. They still have numerous questions about the agreement's potential benefit to the state.

The project, in the works for years, would ship massive amounts of liquefied natural gas from Alaska to China and other Asian countries as early as 2024. But it needs investors and gas buyers.

The agreement was signed by the parties in Beijing on Nov. 8 under the watch of President Donald Trump and President Xi Jingping, as part of Trump's trade mission to China. Walker and Meyer discussed details with reporters that day, but didn't release the nine-page document until Tuesday.

Meyer, president of Alaska Gasline Development Corp., said Tuesday the delay occurred because extra time was needed to notify the Chinese parties before the agreement's release.

The document says Sinopec could help design and build the project, while 75 percent of the gas could be sold in China. Alaska would retain and sell the other 25 percent, Meyer said.

The $800 billion China Investment Corp. could be an investor and the Bank of China could be a lender, as part of the deal.

In questions from Alaska reporters Tuesday, Walker addressed criticism that he had not brought enough transparency to AGDC, including before the deal was announced.

"I know not everyone is happy with how this has transpired, but the proof is a bit in the result," he said.

Walker said the agreement is significant in part because of the high-level political interest from Trump and Xi. Also, the Chinese-owned companies are among the world's largest firms and have a strong interest in Alaska's gas, he said.

The names of the Chinese business officials were blacked out "for privacy," the agreement said.

Walker stressed that ongoing negotiations — between AGDC and the Chinese companies — must be confidential because they involve sensitive details that might be sought by project competitors.

China is a giant consumer of natural gas. During Trump's visit, the Chinese struck other nonbinding deals with U.S. entities. One deal involved China Energy, for a possible $84 billion investment in West Virginia's shale gas and other projects, according to news accounts.

The Legislature has not seen how AGDC arrived at its $43 billion cost, she said. She said she is concerned about the possibility for cost overruns such as those experienced by other projects, including Chevron's Gorgon LNG project in Australia. That cost $54 billion, about $17 billion over budget, according to news reports.

"If there are cost overruns, who is responsible? Is Alaska left holding a stinky bag here?" she asked.

"I read this as them saying, 'We don't want to just bankroll this, we want the work,' " Persily said.

If large amounts of construction contracts go to overseas companies, that could raise political complications for the project, he said.

"It's a fair point to say Alaskans and Americans will grumble about that," Persily said.

Walker said Alaskans would see the benefit of 10,000 to 12,000 jobs during construction.

At least one Canadian company was one of several contractors involved in building the 800-mile trans-Alaska oil pipeline in the 1970s, a project Bishop helped build.

Construction deals with foreign entities can prioritize Alaska hire, as they did then, he said

"It's all in the details for me, and we have a long way to go on this," Bishop said.

Brad Keithley, a former oil and gas attorney who follows and frequently comments on Alaska energy and fiscal issues, said the agreement contains an inherent conflict in that China, if it invests, will want the lowest gas price. Meanwhile, Alaska must seek the best price for its gas.

That doesn't mean China should not invest, but Alaska must be cautious, he said.

The state might get a better return on its money if it chooses not to pursue Alaska LNG, and instead focuses on intelligent investments using the $62 billion Alaska Permanent Fund, Keithley said.

Walker has said he would not use the Permanent Fund to finance the project. He said Tuesday that Alaska LNG could generate $1 billion to $2 billion in annual revenues.

Meyer said other investors besides the Chinese could include the state of Alaska, but not necessarily. Money could also come from "strategic investors" around the world, and even Alaska citizens, municipalities and regional entities.

He said the state will own and control the project. The state hopes to sign a "definitive agreement" with the Chinese companies by the end of next year, he said.